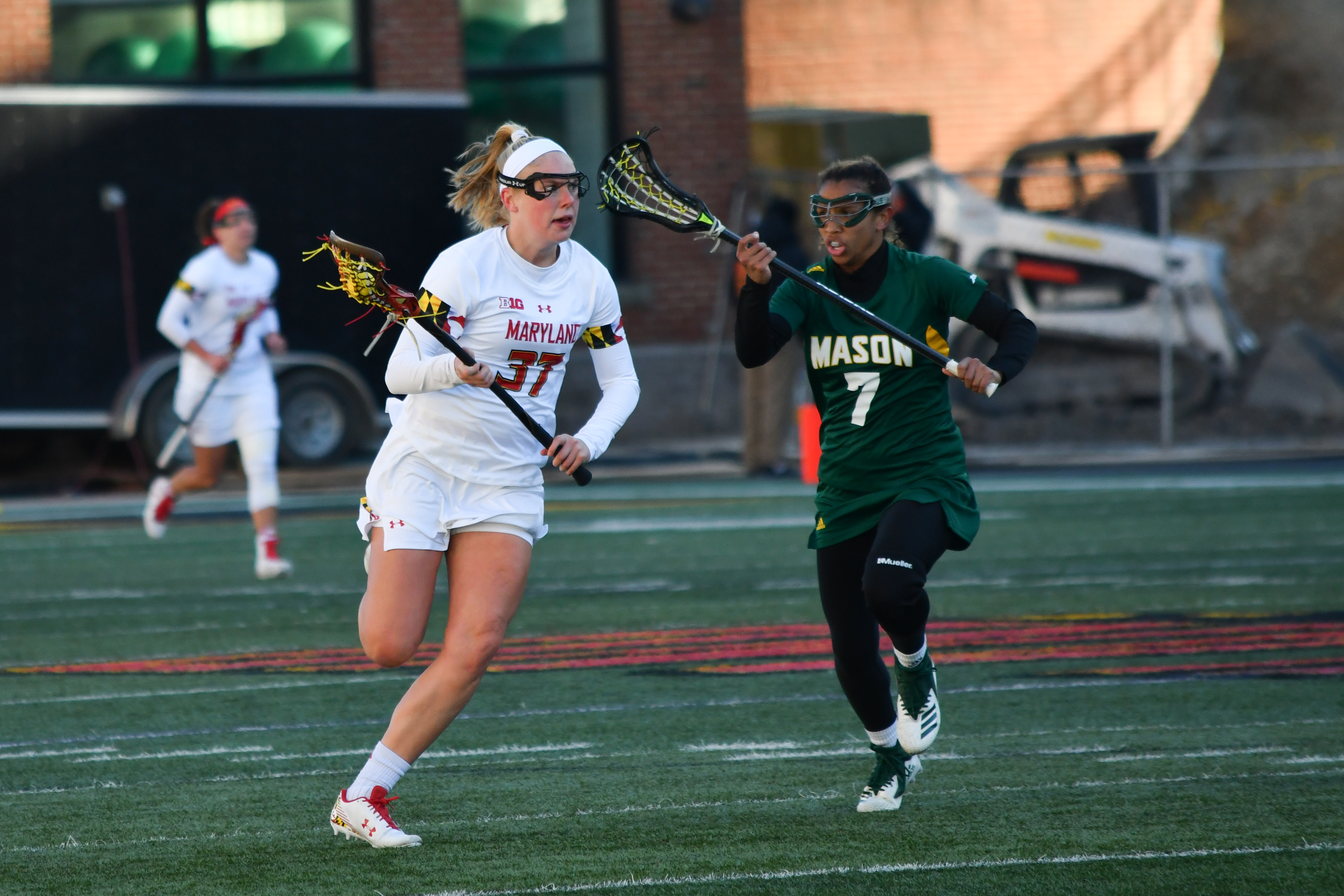 Thirty minutes in against Georgetown, the Maryland women’s lacrosse team’s usual playmakers had gone quiet, as the Hoyas’ relentless defense held the squad to a season-low seven first-half shots on goal.

The attacking duo of Kali Hartshorn and Caroline Steele were kept off the scoreboard, while midfielders Jen Giles and Erica Evans were able to notch only a goal each, frequently hounded by Georgetown defenders when receiving passes.

With its top four goalscorers unable to generate much offense, Maryland turned to other sources to dig it out of an 8-4 hole — and midfielder Meghan Siverson answered the call.

Early in the second, the senior drew a foul before firing a perfectly executed bounce shot off the ensuing free position. Her strike was the first of 13 second-half goals for Maryland as it overcame an early scare to beat the Hoyas, 17-8, and remain undefeated.

Siverson’s contribution to the win personified her role with the team: While her impact isn’t always evident on the stat sheet, her selfless attitude and knack for timely goals has proven vital to the team maintaining its spotless record. And her efforts will be even more imperative with the postseason looming and the Terps eyeing a national championship.

“She’s such a great player,” Giles said. “She has one speed, and it’s really fast.”

While Siverson’s 17 goals and four assists don’t jump off the page, her continuous off-ball work and unselfish play make her an asset for Maryland. And after transferring from Louisville prior to last season as one of the premier young players in the nation, Siverson has embraced her role further out of the spotlight with the Terps.

Siverson notched 55 goals as a sophomore with the Cardinals and garnered Intercollegiate Women’s Lacrosse Coaches Association third team All-American honors. Yet, she came to Maryland without a guaranteed starting job.

“Meg’s been a great addition to our team last year when she joined us,” coach Cathy Reese said. “She was an awesome player for Louisville before she came over.”

Siverson served more as a draw specialist in her first season with the Terps, totaling 63 draw controls in 2018. Most of her work came off the bench as she adjusted to her new team.

However, with 11 goals in the last six games of the season — including two hat-tricks — Siverson flashed some of the scoring ability that has earned her a starting role in 2019.

“She’s really great inside at getting open,” Giles said. “And hitting the back of the net.”

Though she struggled in the Terps’ NCAA tournament semifinal defeat to Boston College last year, Siverson has developed into a well-rounded player since. She’s on pace to blitz last year’s goal tally and has also demonstrated an ability to dole out precise passes.

Just under a minute into the second half against Rutgers in March, Siverson noticed attacker Brindi Griffin had a step on her defender. She floated a well-timed pass that the junior caught in stride and expertly finished. Siverson also provided two assists against James Madison, contributing to a blowout victory over the reigning national champions.

“Overall, across the board we’re trying to pick each other up,” Siverson said. “We’re playing for the person next to us, and not for ourselves.”

Although her shooting opportunities have been few and far between, Siverson has showed why she was able to rack up points in her time at Louisville. Against the Scarlet Knights, she flashed her shooting skills with a well-placed sidearm laser on the brink of halftime that put the game to bed for the Terps.

While her days as a feature player are likely over, Siverson hopes that her work in her second and final year with Maryland will culminate in postseason glory. Whether it’s making an extra pass, netting a decisive free position effort or ensuring her teammates are on the same page, the senior is a key component in the Terps’ title push.

“We’re just so happy that she came to our team,” Giles said.