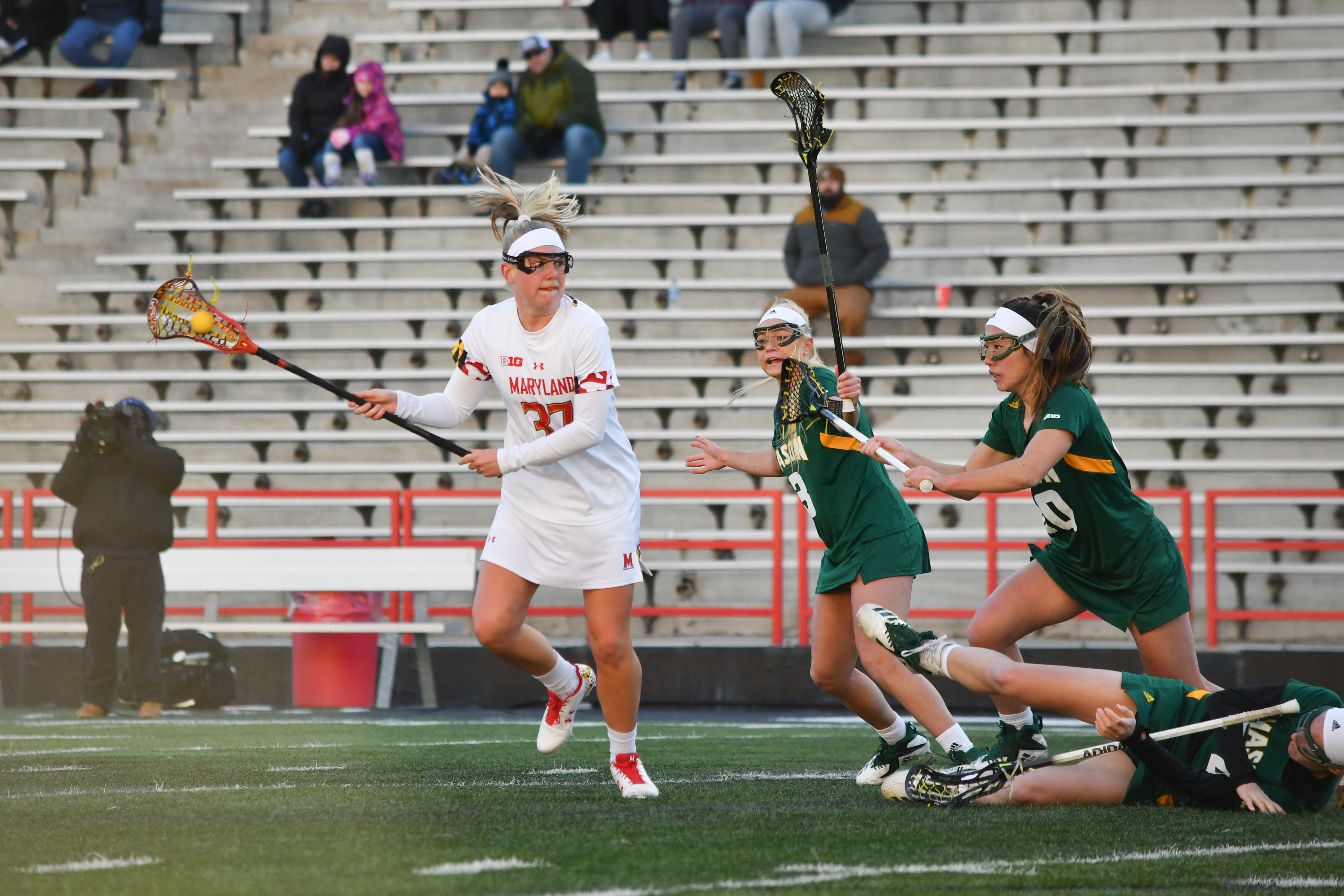 Trailing 8-4 against Georgetown at halftime, Maryland women’s lacrosse was flustered.

Coach Cathy Reese appeared animated in the huddle as she talked to the team. Midfielder Jen Giles cracked a smile to ease the tension, egging on her teammates as the Terps searched for a source of motivation.

Despite the halftime motivation, Maryland would start the second half with an almost-immediate turnover — the same mistakes that plagued the squad to its largest halftime deficit of the season.

But with 27:03 remaining, midfielder Meghan Siverson had a clear lane off a free position and fired a shot into the bottom corner of the net. After the score, the Terps huddled quickly and sprinted back to their starting positions.

The comeback was very much on.

In a standout second-half performance, the crucial difference between the two sides was the Terps’ ability to finish on free position looks. Maryland converted 9-of-11 opportunities in the second half, accounting for the nine-goal difference in the 17-8 comeback win.

“We started to score our eight meters in the second half,” Reese said. “We were 1-for-5 in the first half, that’s not good enough.”

At the onset, it was free position shots that might have hurt the Terps the most. Georgetown’s aggressive defense committed 13 first-half fouls to Maryland’s two, but the Terps didn’t take advantage of their free looks in the first half — four of their five free position attempts either sailed well off the mark or fell harmlessly into goalie Haelle Chomo’s stick.

In the second half, the tides turned. Siverson’s clinical strike exorcised the Terps’ demons and triggered a 13-0 run that put the game to bed.

Although Siverson started the onslaught, midfield tandem Erica Evans and Giles largely spearheaded it. Giles notched five goals and two assists for a season-high seven points. Evans scored four while shooting 2-for-2 from the line.

“We saw a lot from our senior leadership today,” Reese said. “I think it’s awesome how Jen Giles came out in the second half, brought everybody together, and really stepped it up.”

Giles scored or assisted on three of the first five goals of the half, highlighted by a well-timed feed inside to midfielder Grace Griffin, who finished to give the Terps their first lead, 9-8 — one they wouldn’t relinquish.

“We had to remind ourselves that we are the best we can be out there,” Evans said. “And just play our game.”

Maryland also benefited from a tactical switch. In response to Georgetown’s zone defense, Reese deployed an extra attacker closer to the goal. The shift gave Maryland more passing options down low, and forced the Hoyas to commit an unseemly 18 second-half fouls.

And as the Terps started to convert their looks, the once-tense bout turned into a familiar blowout.

“In the second half we had the confidence stepping on the line,” attacker Brindi Griffin said. “Everyone was putting them away, and that was awesome.”

Maryland’s second-half draw control dominance forced the Hoyas to become more aggressive to regain possessions. Combined with 18 fouls, this led to a surplus of free position opportunities for the Terps.

After holding a 9-4 advantage from the circle at the half — albeit with little to show for it — Maryland notched 12 to Georgetown’s two in the final 30 minutes, inciting an explosive 13-0 run to close the game.

“In the second half, Kali and Lizzie [came] up with some huge draw controls to help get the energy and momentum on our side,” Griffin said.

Although their slow start carried into the first few minutes of the second period, the Terps found success on free position opportunities when they needed it most. And the resulting solid shooting and draw circle domination brought them a 16th straight win.

“This team is capable of amazing things,” Reese said. “We’ve seen this in every game this season.”