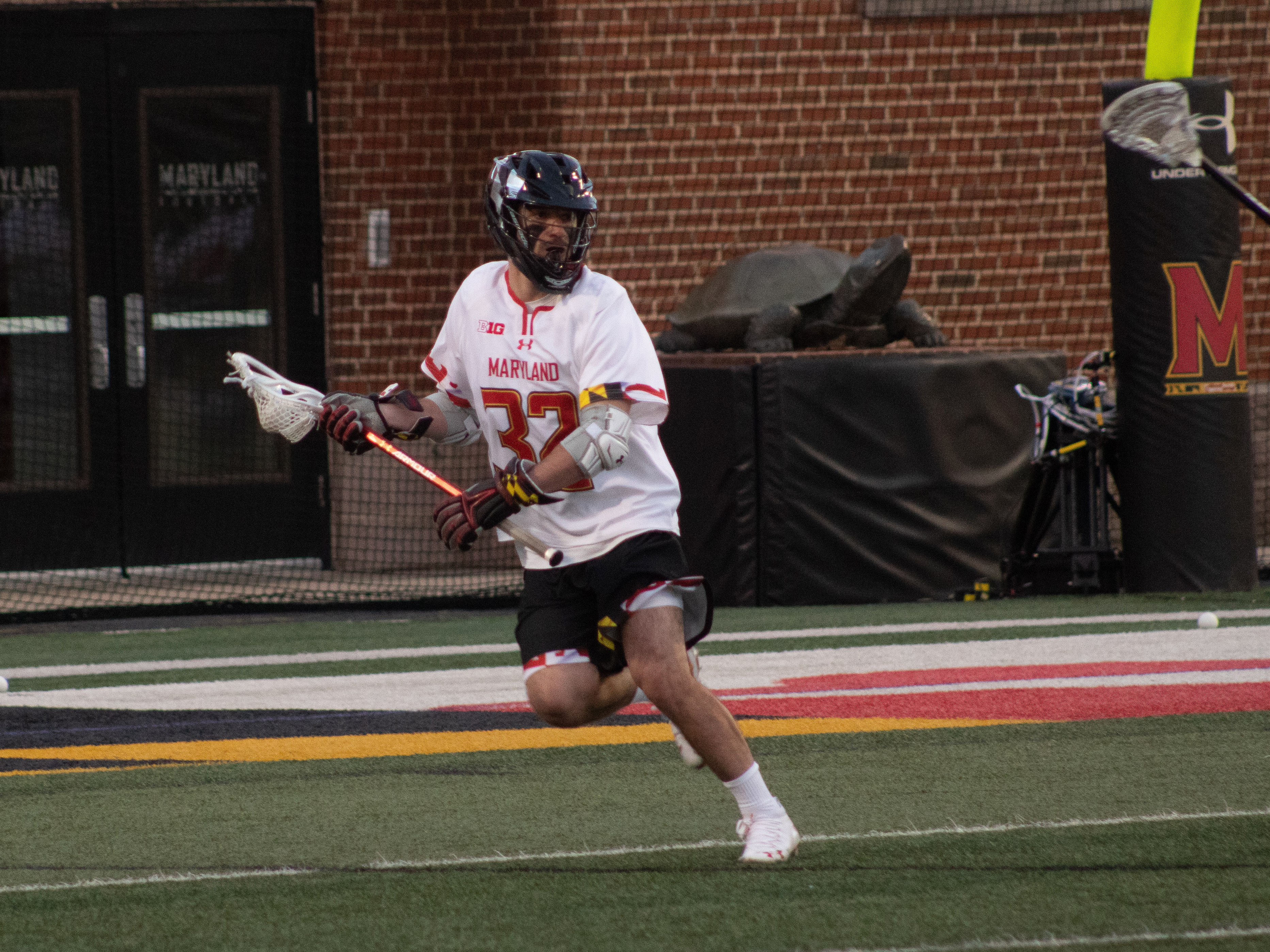 Attackman Louis Dubick scans the field during No. 3 Maryland's 13-10 loss to No. 1 Penn State at Maryland Stadium on March 31, 2019. (Tyrin Gray/The Diamondback)

Having grown up in the state, Maryland men’s lacrosse attackman Louis Dubick often attended “The Rivalry” — the annual game between Maryland and Johns Hopkins.

When schools began recruiting Dubick, the rivalry played a role in that process. But playing for the Blue Jays never was “much of an option in the long run,” he said, opting instead to continue the family legacy and become a third-generation Maryland lacrosse player.

On Saturday at Maryland Stadium, No. 2 Maryland will host Johns Hopkins, pitting the two schools against one another for the 111th time. The teams’ storied history has established a distaste between the programs separated by just over 30 miles — an in-state rivalry the current Maryland team has embraced.

“They’re right down our road. Some of the guys, we might have known them in high school or whatever. We don’t like them anymore,” defender Curtis Corley said. “The blue and the red, they don’t really mix too well together.”

In this historic matchup dating back to 1924, the clash of blue and red stretches far beyond color schemes. It manifests on the field with a fierceness between the teams that in recent weeks, Maryland coach John Tillman said, has pushed his squad to greater heights.

“The nature of this game, everybody is going to be excited about playing in this game,” Tillman said. “You have to believe that everybody’s going to be dialed in and ready to go.”

Corley, a New Jersey native, arrived at Maryland unfamiliar with the animosity between the two programs and fan bases. But he said as soon as he stepped onto campus, older players talked extensively about the matchup to instill the magnitude of the game in him and other young players.

Now, Corley is the senior captain taking on that responsibility. He started the week of practice saying, “It’s Hopkins week, let’s get this thing going.”

Dubick, who went to Winston Churchill High School in Potomac, was already aware of what this matchup brings. In his years watching and experiencing the bout, he’s noted the energy, intensity and physicality the players bring.

The two seniors don’t expect anything different from the Blue Jays when they take the field Saturday night, even with the visitors entering as an unranked team on a two-game losing streak.

“No matter the record or whatever, they always get prepared for us,” Dubick said. “Anytime we play them, we know we’re in for a battle.”

Dubick and Corley — along with the rest of the 2016 recruiting class — had won four straight matchups against Johns Hopkins, capped off by the longest game in the series’ history when midfielder Will Snider’s goal propelled Maryland to a triple-overtime win last season.

But a week later, in the Big Ten tournament final, that class lost to the Blue Jays for the first time in their careers.

The motivation to avenge that defeat has provided even more incentive leading into this year’s matchup — as if it needs any extra fuel.

“It’s hanging there. They took something from us that we could’ve had,” Corley said. “But, heck, every Hopkins-Maryland game is going to be what it lives up to. … It’s just one for the ages every single time we step on the field.”

To Tillman, the rivalry has it all: tradition, a lineage of great players, high stakes, proximity and an abundance of fan support.

The ninth-year coach has seen the highs and lows of the matchup, and knows the intensity associated with it is exactly what his players crave.

“When you’re a young guy, and you’re dreaming of playing in college lacrosse, this is the game you want to be in,” Tillman said. “And on that day, it’s really the game.”