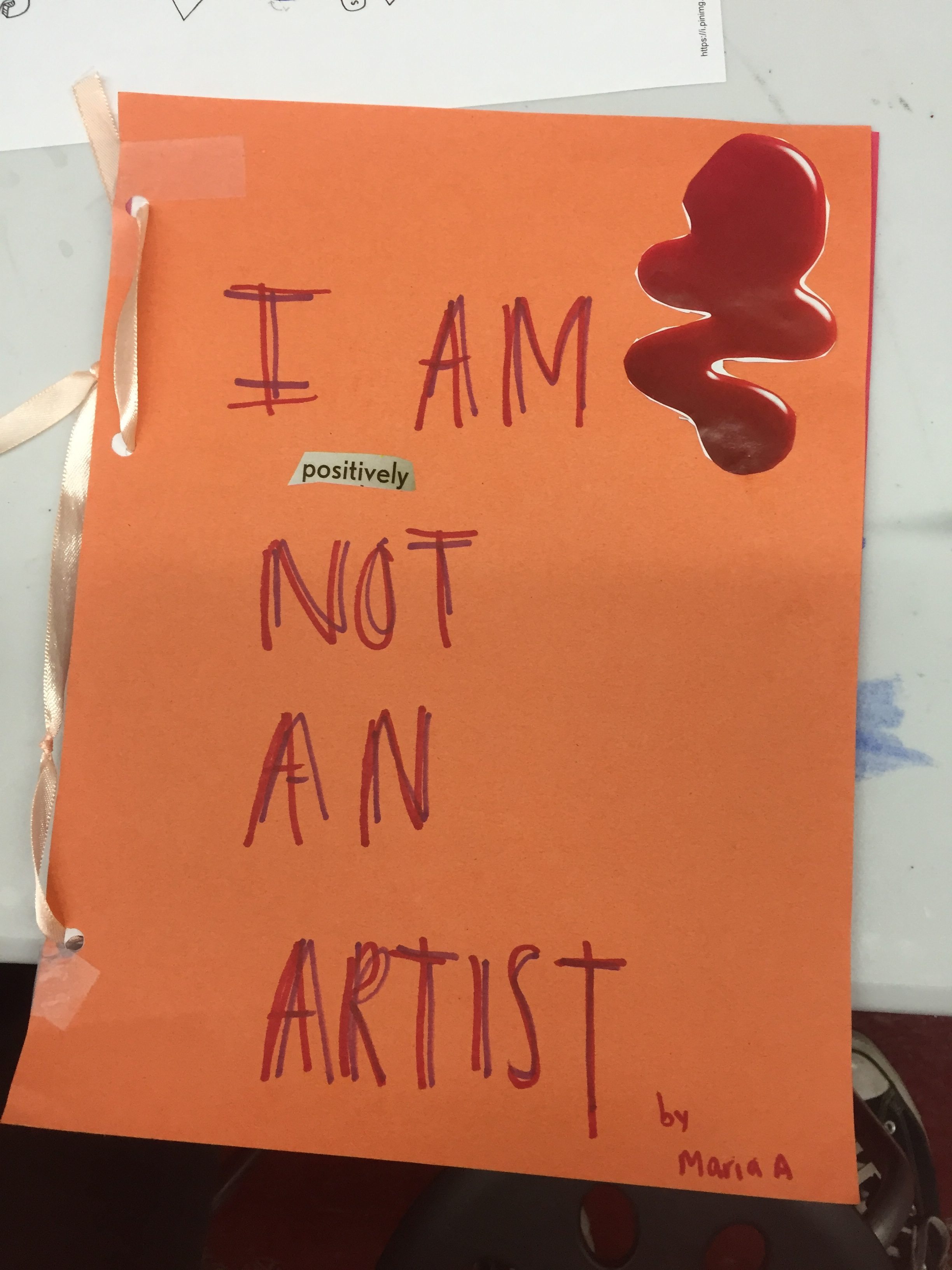 The cover of a zine made by junior Maria Aragon at the Pride Month zine-writing workshop on April 22, 2019 at Stamp Student Union. (Ian Round/For The Diamondback)

By Ian Round
For The Diamondback

Using orange construction paper, markers and magazine clippings, Maria Aragon made a piece of art that says “I am positively not an artist.”

On the inside pages, Aragon used labels they identified with more strongly: writer, queer, Latinx, feminist.

They had made a zine — a type of art that resists categorization — at Between the Lines: A Pride-Themed Zine Writing Workshop. They facilitated this workshop for queer people Monday afternoon in Stamp Student Union’s Studio A, as a part of the University of Maryland’s Pride Month celebration.

“It’s very special for us as the queer community to make sure our voices are heard,” said Aragon, a junior English and film studies major.

Studio A, which used to be known as the Art and Learning Center, offers non-credit art classes for students, faculty and community members. It also partners with campus groups such as the Pride Alliance.

Aragon, who works at Studio A and is president of the Pride Alliance, provided prompts: What makes you you? What creates community? They encouraged the 10 attendees to write toward self-discovery. Even if they didn’t show them to anyone, Aragon said zines are important to “reflect on later in life.”

Attendees folded and cut pieces of paper into four-page booklets. They wrote poetry and personal thoughts, drew and collaged.

Tara Youngborg, who manages Studio A and the Stamp Gallery, made a zine celebrating love: queer love, romantic love, platonic love, “love between strangers” and self-love. She cut images of flowers out of glossy magazines and glued them to her zine.

She said she has an “abiding love of zines” in part because “there’s a really low barrier to entry.”

She’s been making and collecting zines since about 2008, when she was a student at St. Mary’s College of Maryland. She said zines are a transgressive, anti-capitalist medium in which she could find information about topics like lesbian history, vegan food and punk rock bands. A zine is “a DIY publication … that someone puts together to distribute at a low cost,” she said.

“We can put the images together in a way that can be absurdist but also, frankly, critical,” she said.

Rebecca Lemus, a participant who graduated from this university in 2003, said she visits campus about once a month to use the library and attend events like these. She said she makes zines to find “clarity in queer identity.”

Lemus said making zines feels revolutionary. They look like books, she said, which makes them different from private journals.