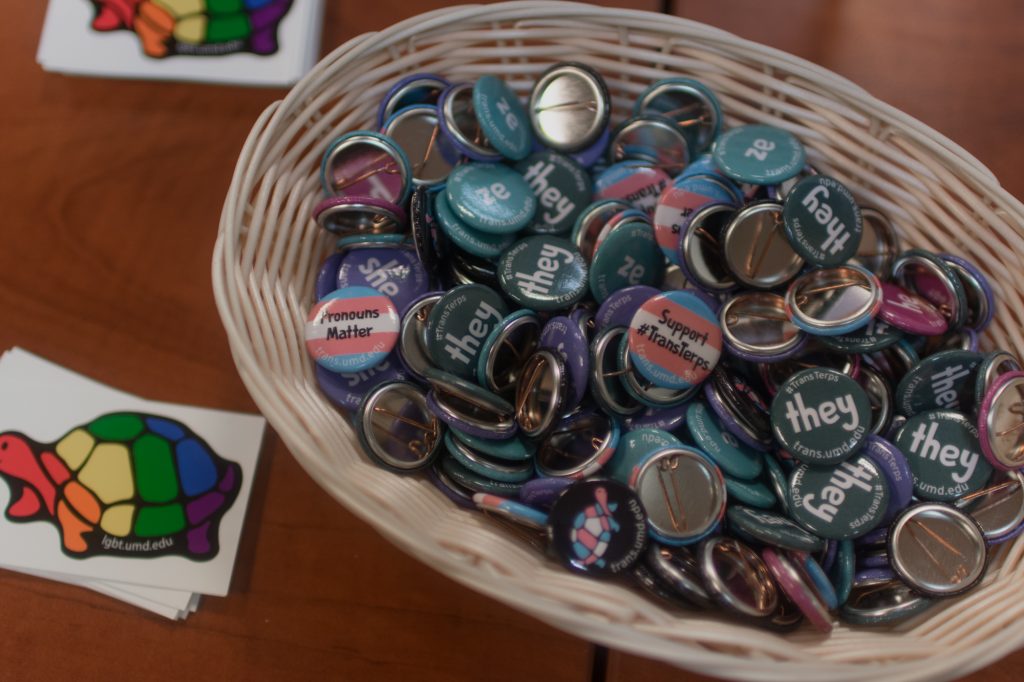 The LGBT Equity Center, located in Marie Mount Hall, is a safe space for LGBT+ students at University of Maryland. (Gabby Baniqued/The Diamondback)

A group of University of Maryland students sat in a circle, some with eyes closed, some with hands clasped tightly together or fidgeting with loops of beads. The room in Marie Mount Hall was silent, except for the sound of deep, measured breaths.

The students opened their eyes. Sitting on couches and chairs inside the book-lined walls of the LGBT Equity Center, they resumed a difficult conversation about the killing of Ashanti Carmon, a black transgender woman.

Carmon, 27, was found shot multiple times early in the morning of March 30 in Fairmount Heights, a few miles from this university’s campus. Her killing increased the fear that many students live with on a daily basis as people of color, transgender people or both.

“So many of us share an identity or multiple identities with Ashanti, and because this [killing] was in the same county that we’re in, it feels very close to us,” said Litwack, the leader of TransU, the group that hosted the event.

Given the sensitive context, some students who attended the event have been granted anonymity.

One student, who said it was their first TransU meeting, said it’s easy to feel both overwhelmed and detached by events such as these.

“We’re so saturated with everything happening,” they said. “Human beings weren’t supposed to process [this] amount of hurt in the world.”

Attendees voiced their sadness at the relative lack of attention Carmon’s death has received from transgender activists they follow on Facebook, and the media coverage that has at times focused on her past as a sex worker.

For many attendees, Carmon’s slaying was so traumatic that intermittent breathing exercises like the ones Litwack led were a necessary comfort.

One student said being a transgender person today means living “in a perpetual state of fear.”

Erika Melder, a junior computer science and mathematics major, has been carrying Mace for the past few months, but now is even more frightened about the threats she may face as a transgender woman of color.

“It puts stock in everything I’m worried about,” she said.

Many said the dangers Carmon faced as a black transgender woman are different from the threats they face as white people.

“I’m white. Because of that privilege, I’m much less likely to be noticed as a trans person or be in one of these situations,” said Litwack, a sophomore mechanical engineering major.

Some expressed concerns that the public cared less about Carmon’s death because of her identity as a minority.

Representatives from the Office of Civil Rights and Sexual Misconduct and the Department of Resident Life also attended the event.

TransU fosters an ongoing partnership with OCRSM so the staff “is better educated about trans issues and has experience interacting with trans students so that they can better support trans survivors of sexual misconduct,” Litwack wrote in a message after the event.

Litwack noted that transgender individuals are at greater risk of physical violence. The 2015 U.S. Transgender Survey, which had nearly 28,000 respondents, found that 47 percent of transgender people are sexually assaulted at some point in their life.

Resident Life was included in the hope that staff will be prepared to support students affected by the trauma of Carmon’s death, Litwack added.

Some students said the discussion helped them process the complicated feelings they had after Carmon’s death. But many emphasized that a lot of work remains to combat a climate of transphobia.

“A tragedy like this really hits home. I find talking about it really difficult,” one student, who wished to remain anonymous, said softly. She paused before adding, “I can’t really process it.”