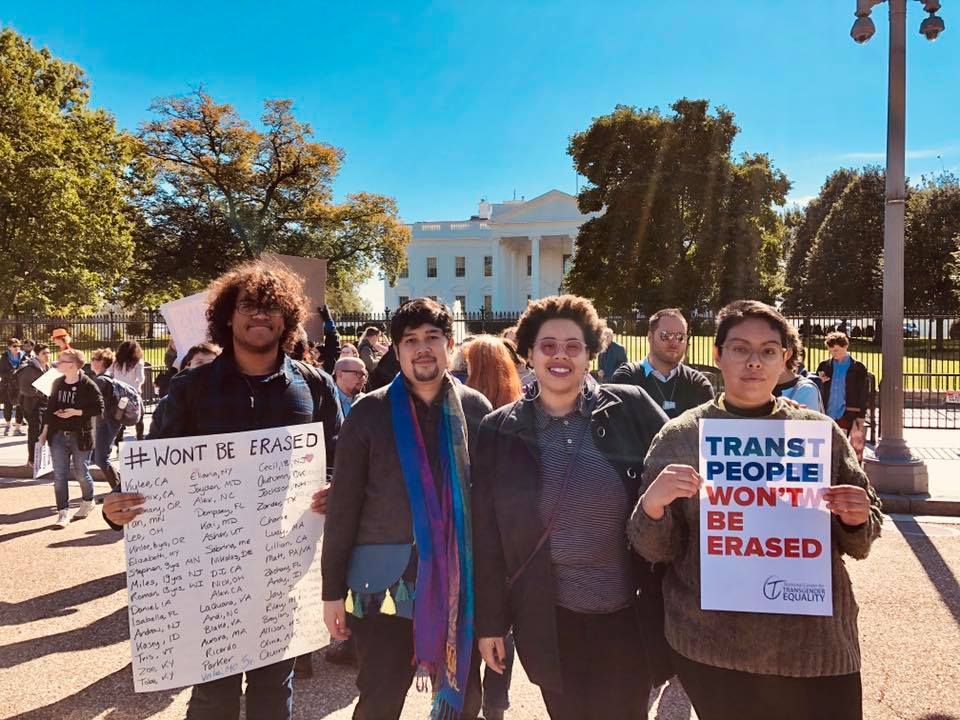 Some members of the university's LGBT Equity Center protested the Trump administration's proposal to define gender as binary Monday in front of the White House. (Photo via Facebook)

Ellie Litwack began to realize that she was transgender at an inopportune time, she said — just before the 2016 presidential election.

“It was really complicated to have that happen at that time,” the sophomore mechanical engineering major said. “As I’ve become confident in myself, I’ve seen the world become less and less welcoming.”

President Donald Trump’s campaign rhetoric about transgender people slowed Litwack’s transition and caused her to spend more time feeling like she needed to hide her identity, she said.

And on Sunday, after reading about Trump’s effort to narrowly define gender as a scientific binary determined at a person’s birth, Litwack said she felt “devastated.”

The Trump administration’s Health and Human Services Department is eyeing a policy that would severely limit transgender people’s rights, protections and recognition under federal civil rights laws, according to The New York Times. In the wake of the report, students and staff at the University of Maryland have spoken out in opposition.

“The fact that they’re even discussing this, I think, is scary,” said Shige Sakurai, associate director of this university’s LGBT Equity Center. “There is this desire to further discrimination, to erase trans folks from existence.”

Though the memo doesn’t yet represent a concrete legal policy, Sakurai added, they worry about the effects it could have on transgender students’ mental and emotional health.

“It feels terrible,” they said.

Litwack said she’s concerned that even without becoming formalized, the memo and policy could encourage day-to-day transphobia.

During her time at this university, Litwack said, she’s faced harassment and discrimination because of her gender expression. Strangers have yelled at her and called her names while she walked across campus, and since her transition, she’s had trouble getting classmates to work with her on group projects.

Now, she’s worried it could get worse.

“This emboldens people,” she said. “That’s what scares me most.”

If enacted, the HHS policy could radically alter how institutions across the country interpret Title IX, a federal law that prohibits discrimination on the basis of sex, said Mark Procopio, executive director of FreeState Justice, a Maryland-based legal advocacy group for LGBT people.

“Several dozen courts over the past few decades” have held that Title IX’s sex-based protections also cover gender expression and sexual orientation, Procopio added. But if that changed, it could have serious legal implications.

Though Maryland’s gender identity protection laws are relatively strong, a federally-mandated binary definition of gender could threaten transgender people’s ability to get insurance coverage for transition-related care or take action against workplace or education harassment.

“People who believe in the fair treatment and dignity of each person should be furious,” he said, “and should forcefully, forcefully oppose this.”

Maria Aragon, president of this university’s Pride Alliance — an LGBT advocacy group — said they felt a painful, sinking sensation in their chest when they read Sunday’s article in The Times.

“This? Right now?” they asked themselves. “After all the shit we’ve been going through with this administration?”

Last year, Trump tweeted that he’d ban transgender people from serving in the military, and in April, the administration announced it planned to roll back a regulation that protected coverage that included transition-related healthcare under the Affordable Care Act.

For Aragon, who said they only recently became comfortable living outside the gender binary after years of feeling dissatisfied with their expression, the memo was another hit.

Aragon and Sakurai were part of a group of students and Equity Center staff who took to Washington, D.C. Monday to protest the memo. They gathered in front of the White House brandishing signs, one of which declared in bold red and blue letters that “trans people won’t be erased.”

Though Sakurai described the rally as “empowering,” they added that efforts to protect transgender people are long-term struggles.

Sakurai said their office wants to push the university to include gender identity and sexual orientation questions as an option on their demographic surveys. Without that, they said, it’s hard to keep track of important data like retention and graduation rates for LGBT students.

“Social justice work takes a lot of effort,” they said. “It’s not just about protests.”