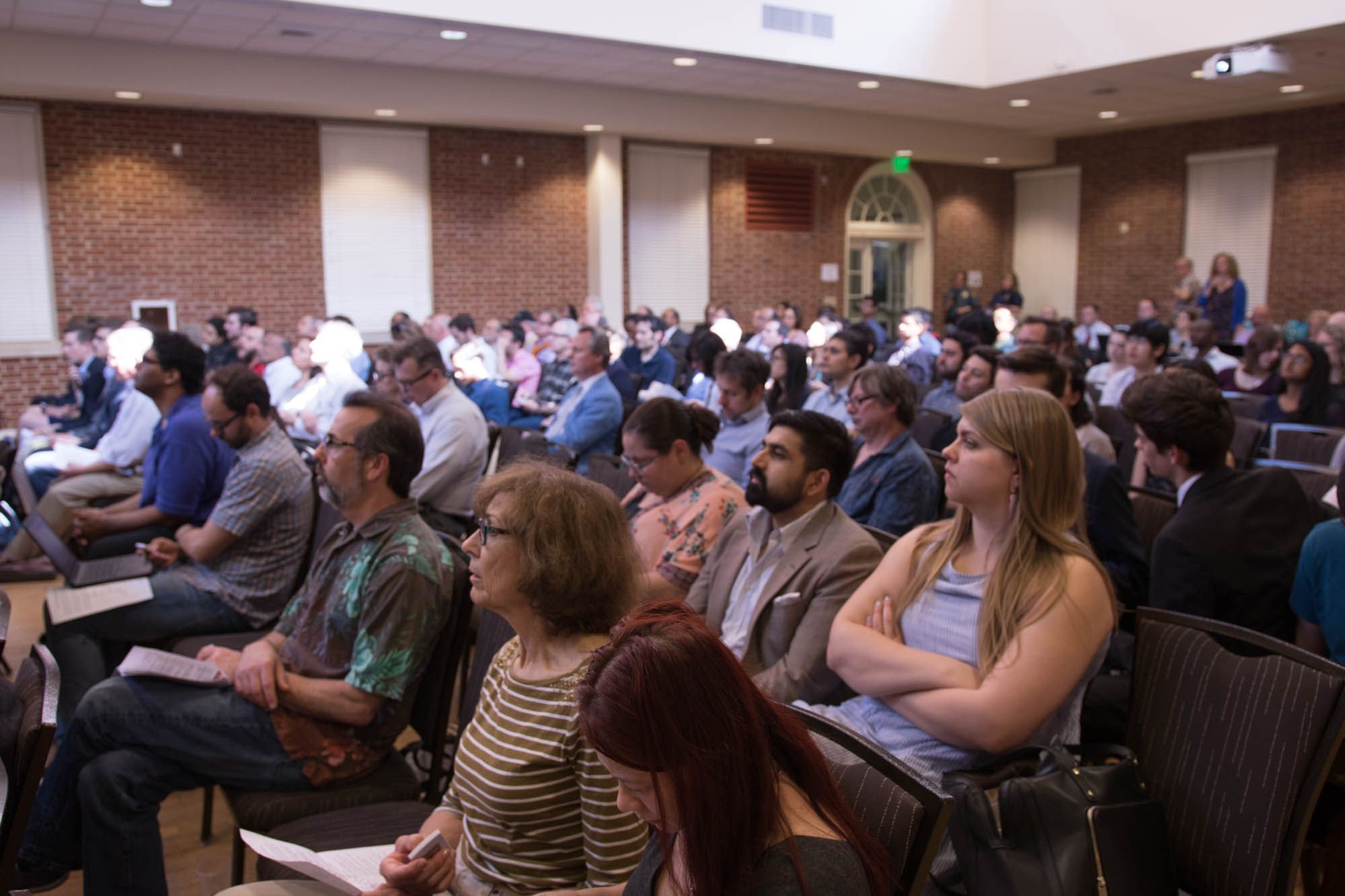 Senators, graduate students and others listen to University of Maryland Senate Chair Daniel Falvey during a transition meeting in Stamp Student Union on May 9, 2018. (Richard Moglen/The Diamondback)

A group of newly-elected senators will join the University of Maryland Senate in May after being elected last month — and some of them say they’re looking to make cultural changes within their constituencies or the governing body.

The terms of 44 faculty and eight staff senators ended this year, but senate director Reka Montfort said that all of these positions may not be filled by newly-elected senators, as some were replaced mid-term for outstanding circumstances and are eligible to run for re-election.

Many staff senators spoke about lifting the voices of their constituents, which they said can be underrepresented and overlooked.

Lisa Klein, who’s been the history department’s finance director since 2015, has been active in her department as the co-chair of the arts and humanities college’s staff council. She said she decided to run for senate so she could continue the work of representing her colleagues on a larger level.

“What I care about is that staff have a voice on campus,” Klein said. “There are a lot of avenues for faculty and students to address concerns on campus, and multiple different ways to do that, but not a lot for staff. As I view it, the staff are the bedrock, the foundation of how faculty and students can be successful.”

[Read more: Nearly all of UMD Senate’s student members will be newly elected]

Charlotte Johnson, a newly-elected staff senator and library services specialist, ran for a similar reason — seeking to bring the perspectives of contingent category-2 staff, who are hired on a written agreement for a year-long period that Johnson says is renewable up to two times — into the senate.

“There are some things that affect contingent staff differently than they affect permanent staff,” said Johnson, who has been in the library services department of the university since 2016, and received her bachelor’s and master’s degrees from this university.

One example of that would be collective bargaining, she said, because unlike other staff members, the union doesn’t file grievances on their behalf or represent them in court.

In this academic year, the senate has reviewed reports on the university’s football department following the death of offensive lineman Jordan McNair, legislation on the academic integrity code and recommendations to change how an applicant must disclose criminal background on applications.

Some representatives are joining the body to initiate change within their constituencies. One is Bob DuDonis, who’s been a pest control specialist at this university since fall 2017. He said he wants to promote a “culture change” within the staff and to inspire a greater sense of accountability and energy.

“[Staff] don’t seem to be very motivated to do the best we can do,” he said. “There doesn’t seem to be a lot of personal pride. And I think a lot of that stems from lack of any real leadership and motivation.”

DuDonis said he has some ideas on how to streamline senate processes as well. Although he said he has a lot to learn, his immediate proposals are for subcommittees to possibly meet more than once a month, or at the very least, to increase electronic communication between meetings.

It’s something DuDonis thinks he can help with, given his background before coming to the university.

“I come from years of being out in private industry,” he said. “Things are very competitive and more time-sensitive. There has to be someone making a decision … sometimes you can ask to get too much input.”

Some new senators represent individuals across departments. Adam Lloyd, who is a lecturer in the English department, will represent professional track faculty.

In his first year as senator, Lloyd said issues of job security, wages and better facilities will be some of the most prominent on his agenda.

Lloyd, who became a quadriplegic after a sports accident when he was 14, also hopes to bring a voice to people with disabilities. He’s been considering proposing an office of disabilities services for faculty, similar to the Office of Accessibility and Disability Service for students.

“We end up negotiating with the departments we’re in and there’s no standardized means for making accommodations,” he said.

It will also be a transition year for senate chair-elect Pam Lanford. Although the senate has already played its main role in the search for university President Wallace Loh’s replacement by proposing a list of members for the search committee to the chancellor’s office, Lanford said she has goals for the senate’s role in the changes this coming year may bring.

“We’ve been through some very difficult times,” she said. “It’s been very hard. There is, still I think, a lot of pain out there about some of the things that have gone on that we’ve had to process as a community. I’m hoping that we can really begin to work through those in a way that will help heal the campus.”