“Something we can’t escape”: UMD sexual violence survivors speak out at Occupy McKeldin 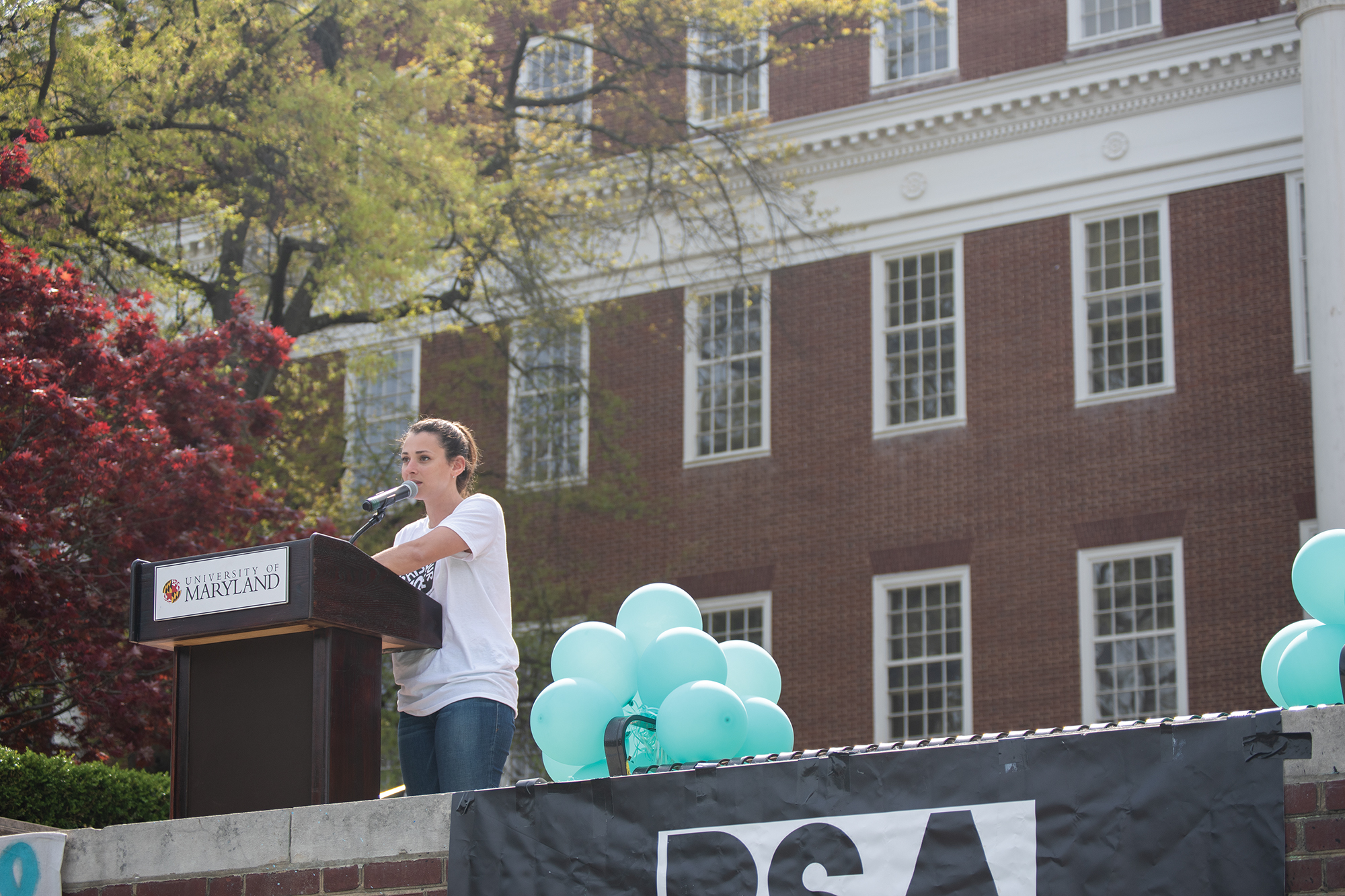 There was a time that Rachel Colonomos didn’t understand what sexual assault looked like.

How it could steal away a voice that was once so loud and present, intrude on important relationships — and make it painful just to exist in one’s body.

Now, Colonomos knows that “so many more people than one could ever imagine” experience sexual violence.

“It’s something we can’t escape,” the senior hearing and speech sciences major said before a crowd on McKeldin Mall at the University of Maryland on Wednesday.

For nearly eight hours, Colonomos joined more than 1,000 other students on the mall for the fourth annual Occupy McKeldin, a rally hosted by the student group Preventing Sexual Assault to raise awareness for the prevalence of sexual violence and how it can be stopped.

From noon to shortly before 8 p.m., students listened to speeches from sexual assault survivors and activists, and stopped by tables with representatives from campus programs that offer resources to victims, such as CARE to Stop Violence.

But this year, the Panhellenic Association — which represents the university’s social sororities — announced that for the first time ever, it would not be participating in that festival.

In a letter to their members, PHA executives wrote that the Interfraternity Council, which represents the university’s social fraternities, had failed to fulfill the sexual assault prevention training required to participate in the event.

Students involved in Greek life have also expressed concerns about other policies on sexual assault prevention trainings. The Department of Fraternity and Sorority Life requires fraternity and sorority chapters to have 35 percent of their members attend a prevention training event each year,  and some members say this requirement isn’t enough to change the community’s culture.

Still, hundreds of students donning their Greek life lettered shirts attended Occupy McKeldin on Wednesday. Alexander attributed the high turnout to a growing awareness for the importance of confronting sexual assault on the campus.

“It is important to reach out and make it a point for Greek life to come, but I think Greek life finds it important to come whether or not it’s an expectation or they’re fulfilling a point,” said Alexander, a sophomore government and politics major.

[Read more: New sexual assault programming is set to roll out at UMD this spring]

This year’s event also came in the wake of a report that showed the Office of Civil Rights and Sexual Misconduct fielded a record 340 reports and complaints of sexual misconduct during the 2017-18 academic year, but only investigated 16 — a low since the office was established in 2014.

In 2016, the OCRSM’s then-director Catherine Carroll spoke out that the office was “under-resourced” and “under-staffed,” which she said caused an inability to keep up with investigations. Carroll resigned in August, and three other staffers followed later in the semester.

In September, this university brought on two new staffers. And in March, after six months of the office being overseen by two interim co-directors, Grace Karmiol — the former Title IX coordinator at Widener University in Pennsylvania — was hired to take over Carroll’s position.

Lizzie Pichowicz, a sophomore studying education who attended Occupy McKeldin, said the rally sends a message to administration that the student body isn’t pleased with the OCRSM.

“Events like this just raises awareness, and it brings it to the attention, hopefully, of the administration that people care about it, and we’re watching them, and they should do a better job,” Pichowicz said.

Colonomos, PSA’s president, said the rally may not halt all sexual assaults on the campus, but she hopes it “make[s] a dent” in the way survivors are listened to and treated.

“And even if nothing comes from our administration after Occupy McKeldin, I know for fact that something will come out of our student body, even if it’s just one singular life being changed because they no longer feel alone,” she said.