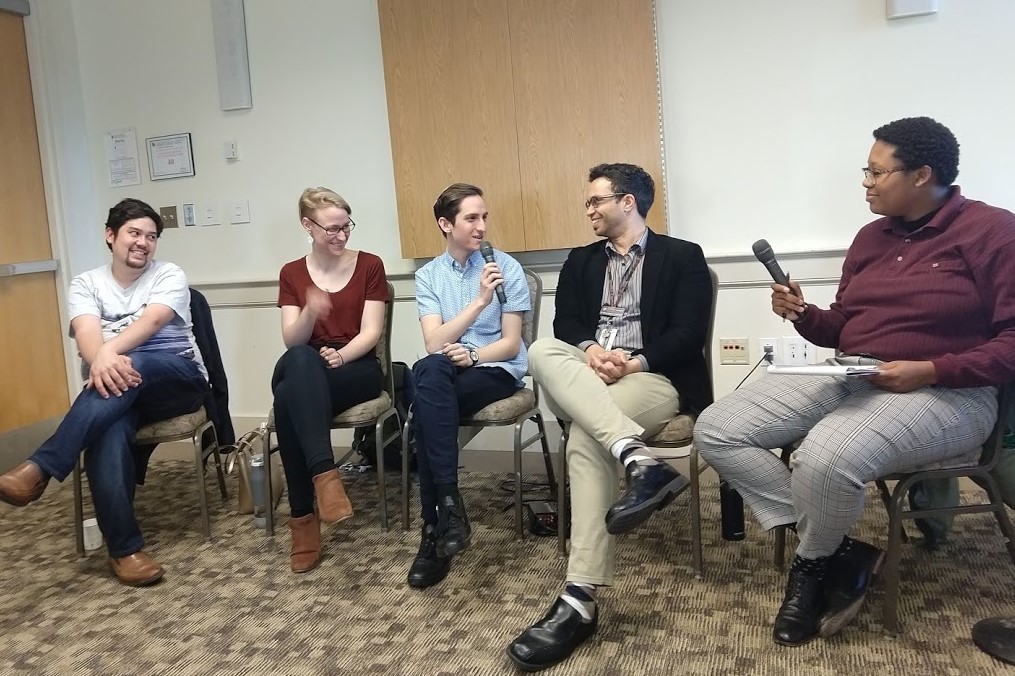 The five panelists from the "Queerly Blessed" panel discussion on the intersection of faith and sexual identity on April 16, 2019. From left, Shige Sakurai, director of leadership initiatives, and associate director of this university's LGBT Equity Center; Wesley Isberner, program and administrative assistant at this university's Lutheran Campus Ministry: Avi Alpert, the president of Hamsa, a gay-straight alliance club at this university; Darren Freeman-Coppadge, a staff psychologist and counselor at this university; and Clarissa Corey-Bey community organizing student intern at MICA. (Riin Aljas/For The Diamondback)

The first time Avi Alpert wondered what his wedding day would look like, he was in Washington, D.C. He saw a married queer Jewish couple, a sight that was inconsistent with the beliefs and traditions of his Orthodox Judaism.

“I saw them and thought, ‘Wow, this could someday be me,’” said Alpert, the president of Hamsa, a gay-straight alliance club at this university.

Alpert was one of five panelists at “Queerly Blessed,” an event organized for Pride Month by this university’s Office of Multicultural Involvement and Community Advocacy. He shared his story of trying to fit his queerness into his religion.

“Wearing a kippah in a D.C. gay bar is just weird,” the junior computer science major said to the 30 or so attendees in Stamp Student Union.

“Someone told me that, ‘I consulted the “Good Book,” and God created man and woman, and I don’t know about this nonbinary thing,’” Sakurai said. “God is nonbinary! I think we’ve read a different ‘Good Book.’”

Collin Vernay, graduate coordinator for MICA’s LGBTQ student involvement and advocacy, said the conversation around sexuality and religion has changed a great deal since he was young, with the rejection of pseudoscientific practices such as conversion therapy.

“The conversation has since evolved,” Vernay said. “And people now recognize the problematic history — but also the benefit — of practicing religion and finding faith in and through queer identities.”

Vernay said the event grew out of increased awareness of religious identity among the LGBTQ community and feedback from students at this university.

The importance of finding community among people who struggle with similar questions on the topic is something all five panelists emphasized when sharing their experiences. But when asked to give advice to others in the LGBTQ community still struggling with their identities, the otherwise chatty panel fell silent for almost a minute.

Darren Freeman-Coppadge, a staff psychologist at this university, who sees clients struggling with identity conflicts daily. He said it takes time to overcome these struggles.

“It’s an almost impossible question to answer,” he said. “The question is very individual and different to everybody, but the most important thing is not to be alone while trying to figure things out.”

Clarissa Corey-Bey, who was raised religious — and still is — described their experience with conversion therapy.

“It was only five years ago … I was still in conversion therapy and believed being queer is something I can change,” said Corey-Bey, a senior English major. “Although I have some strange feelings, I can fix them, and we’ll be cool.”

Liana Gonzalez, a senior African-American studies major, said she has been thinking about organizing a similar event for black queer students, as the need for discussion about queer and religious identity is important both for herself and the students she talks to.

Gonzalez said she still sees a lot of churches that don’t accept LGBTQ people in their community, but that’s starting to change.

“There is one particular church in D.C. where the pastor made very clear that everyone is welcome,” she said. “At the same time, although churches grow more progressive each year, there continues to be places where people go to church for 20 years introducing their partner as a friend, but they still go, because church is an essential part of their identity.”

One day, that will hopefully change, Corey-Bey said.

“Externally, my hope is to show up at my church, in my suit with my partner [on] my arm,” they said. “Internally, I just hope to sing the songs I’ve grown up with and take comfort in what I grew up with and be happy about it.”