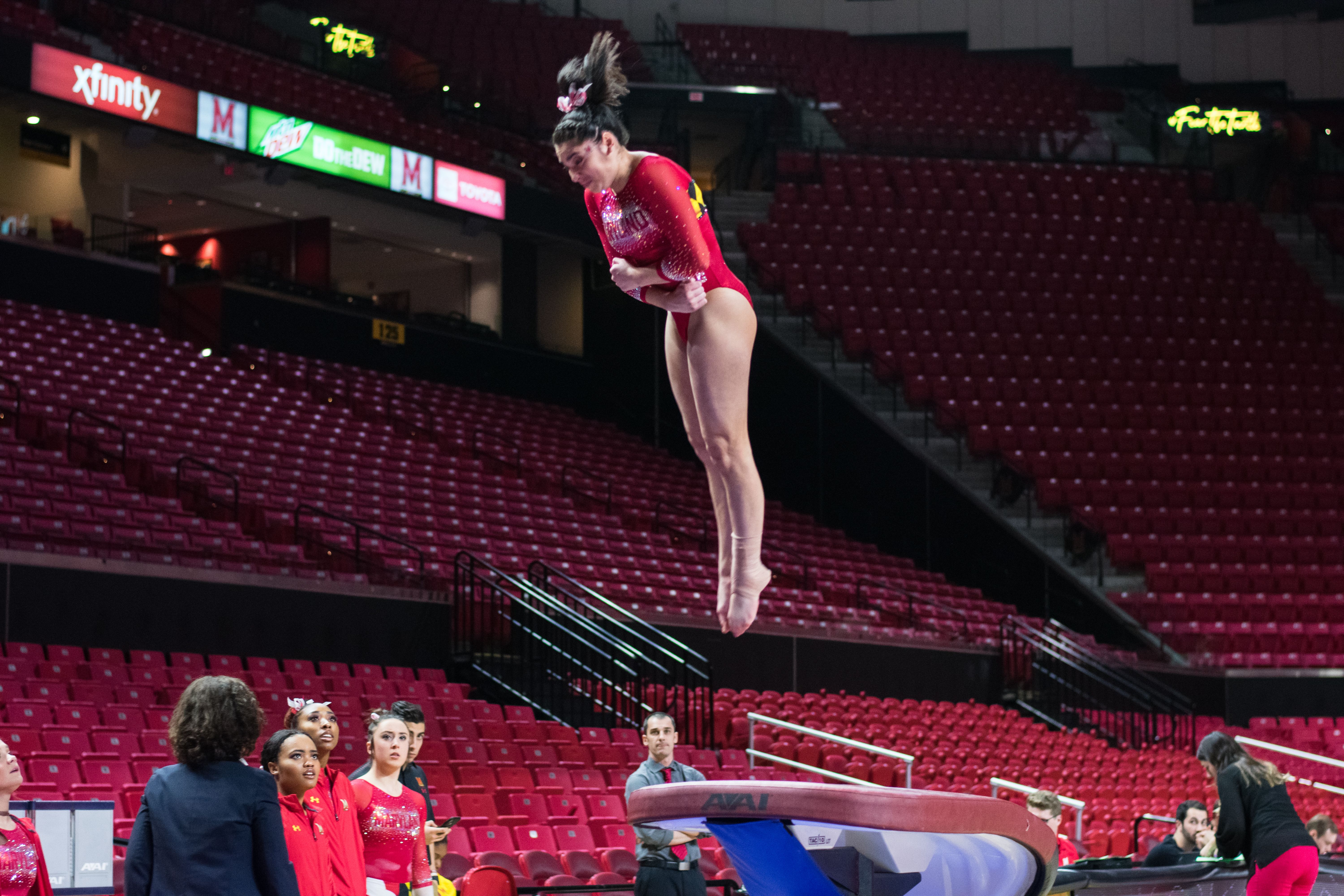 With one rotation remaining during a March 4 meet against George Washington, the Maryland gymnastics team had a chance to accomplish what it couldn’t three days earlier.

Facing the Colonials and BYU on March 1, the Terps finished by putting up their worst score on vault in more than a month, leading to a disappointing 194.825 and two losses.

But with a rematch looming against George Washington later that week, Maryland was confident it could overcome the pitfalls that undid the team in the first meeting. Sure enough, with just one rotation left — this time, floor — the Terps returned to form.

Sophomores Collea Burgess and Audrey Barber powered the Terps to victory, earning a 9.925 and 9.875, respectively, to push the squad to a narrow victory over their former East Atlantic Gymnastics League rivals.

Maryland’s performance in its rematch with the Colonials was a defining moment in a season of growth. While the youthful squad struggled with consistency at times and couldn’t make the leap from good to great, the Terps rode numerous impressive performances to a second consecutive appearance in the NCAA Regionals and now appear well-positioned for the future.

“It’s been a great year,” coach Brett Nelligan said. “This is going to rank right up there with one of our best years in program history.”

[Read more: Even after a poor finish, Maryland gymnastics maintained its season-long positivity]

An up-and-down start to the season saw the Terps lose two of their first three meets, culminating in a season-worst display against Michigan on Jan. 26 — where, unexpectedly, the Terps dipped below 194. But Maryland hit its stride in February, breaking 195 in each of its four meets that month.

“We decided to ignore everything that’s negative around us,” sophomore Emilie LeBlanc said March 4. “I think it helped us tremendously.”

After a few hiccups in the beginning of March, the Terps improved even further, topping 196 in each of their last two regular-season meets — including earning the fifth-highest score in program history on Senior Night. This effort gave Nelligan’s squad seemingly endless confidence heading into the postseason.

“I’m really impressed with how this team has really come together,” Nelligan said in March. “They’re really themselves and they’re believing in each other and it’s all happening at exactly the right time.”

But the mid-year hiccups returned.

Maryland finished eighth in the Big Ten championships, and despite clinching automatic qualification into the NCAA Regionals, the Terps were unable to hit the heights their promising performances to end the regular season may have foreshadowed, finishing in fourth place in the Athens Regional.

“It’s certainly not the way we wanted to finish,” Nelligan said after the regional meet. “I know they’re a little upset right now. But in the days and weeks to come, they’ll reflect on the amazing things we’ve done this season.”

While the team failed to put its full potential on display in the postseason, the year was another positive sign for a program that has been on an upward trajectory.

Maryland finished the season No. 28 in the country, its highest ranking entering regionals since 2013. After relying heavily on bars last season, the Terps established themselves as more of an all-around team in 2019. They finished top-30 in three of the four events, matching their beam ranking from 2018 and improving on floor and vault.

An impressive group of underclassmen blossomed as the season progressed, powering Maryland to a stark improvement in the rankings and setting the team up for continued success. Barber earned All-Big Ten second-team honors, while Burgess, LeBlanc, and Sabriyya Rouse frequently flashed an ability to post high scores.

And despite the team’s 194.65 at NCAA Regionals, the experience alone will be especially fruitful for freshmen Alexsis Rubio and Sanya Glauber, who are primed to take on bigger roles in their sophomore campaigns.

The Terps relied on a heavy underclassmen presence all year, and the upperclassmen were frequently in their ears, providing guidance to the future leaders of the team.

“One day, us upperclassmen are going to graduate and they’re going to be the ones that are stepping up and leading the team,” junior Emma Johnson said in January. “It’s always great to create that special bond right off the start so the team’s connection and relationship can be so strong throughout generations to come.”

While Maryland’s season ended with unexpected postseason falters, the perseverance the young squad displayed in challenging situations — like against George Washington — ultimately defined the team. With key pieces returning, the Terps now look to take another step forward in 2020.

“This team is so talented,” Nelligan said April 4. “We have a lot of great routines coming back, and I’m looking forward to see what we do.”