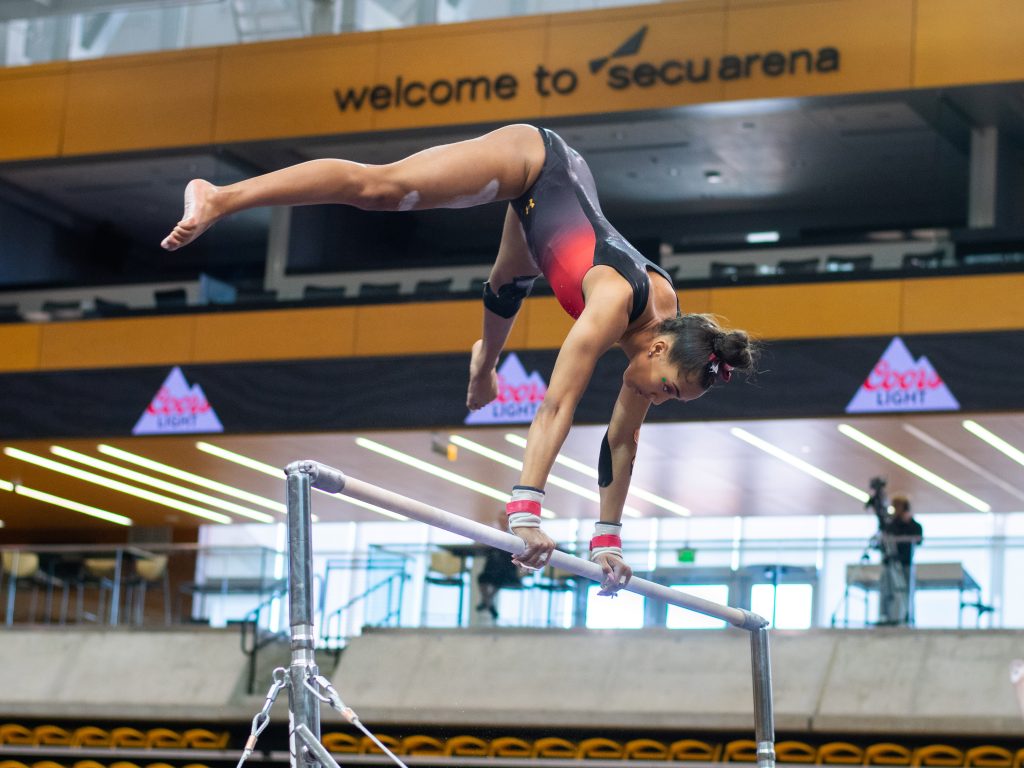 The Maryland gymnastics team hoped to get off to a good start in the Athens Regional on Friday to put itself in position to upset California and finish in second place, earning a spot in Saturday’s regional finals in the new NCAA tournament format.

They seemed well-positioned to do so by starting on floor, an event they had scored at least 49 on in each of the past five meets.

But after just five routines, Maryland’s hopes of extending its season had nearly vanished entirely.

The Terps counted a fall on floor and couldn’t make up that ground in the next three events, also suffering multiple falls on beam and finishing in fourth place with an overall score of 194.65, their lowest score since January.

“One or two mistakes that, if they had gone our way,” coach Brett Nelligan said, “I think the whole meet would’ve looked different.”

Coach Brett Nelligan’s squad said it anticipated experiencing some nerves Friday, and those seemed to come through early. Junior Alecia Farina fell on her third tumbling pass on floor, and sophomore Collea Burgess did the same two routines later. Those falls led to a 48.4 team score, the team’s second-lowest floor score of the season.

The Terps fared much better on vault, earning a 49.05 with four gymnasts earning at least a 9.8. Farina bounced back with a 9.85, and sophomore Audrey Barber improved upon the 9.825 she scored on floor with another 9.85.

“I was really proud of vault,” Nelligan said. “We had came off of a tough floor rotation and for them to bounce back like that and have one of the best vault rotations of the year, it really shows what this team is made of.”

Maryland had a respectable showing on bars, but didn’t show the quality that made the event its strongest throughout the season. Barber and fellow sophomore Emilie LeBlanc earned 9.85s, while junior Tiara Wright earned a 9.8, but the Terps fell just short of the 49 plateau, posting a 48.95 score.

“LeBlanc did a very good job today,” Wright said. “She started us off very strong on bars. … Emilie’s energy and positivity is exactly what our team needs.”

With only one event to go, the Terps trailed NC State and were more than a point behind California for second place. Maryland couldn’t close the meet on a high note, counting another fall and scoring a 48.275 despite 9.8s from Barber and LeBlanc.

Barber came up just short of having a chance to advance as an individual in the All-Around, with her 39.325 ranking below Missouri junior Morgan Porter’s 39.475.

Barber was the bright spot of Maryland’s second consecutive disappointing meet to close the season, with the Terps having finished ninth at the Big Ten Championships two weeks prior.

Despite their struggles in the last two meets, 2019 was a relatively positive year for the Terps, who qualified for regionals for the second consecutive year and did so with a ranking three spots higher than last season.

“The overall season was the bomb,” LeBlanc said. “I don’t remember one meet where we didn’t have fun … no matter what.”

And with seniors completing just five of Maryland’s 24 routines Friday, the team will return plenty of pieces next season as it attempts to get redemption for its disappointing postseason.

“This team is so talented,” Nelligan said. “We have a lot of great routines coming back and I’m looking forward to see what we do.”