Even after a poor finish, Maryland gymnastics maintained its season-long positivity 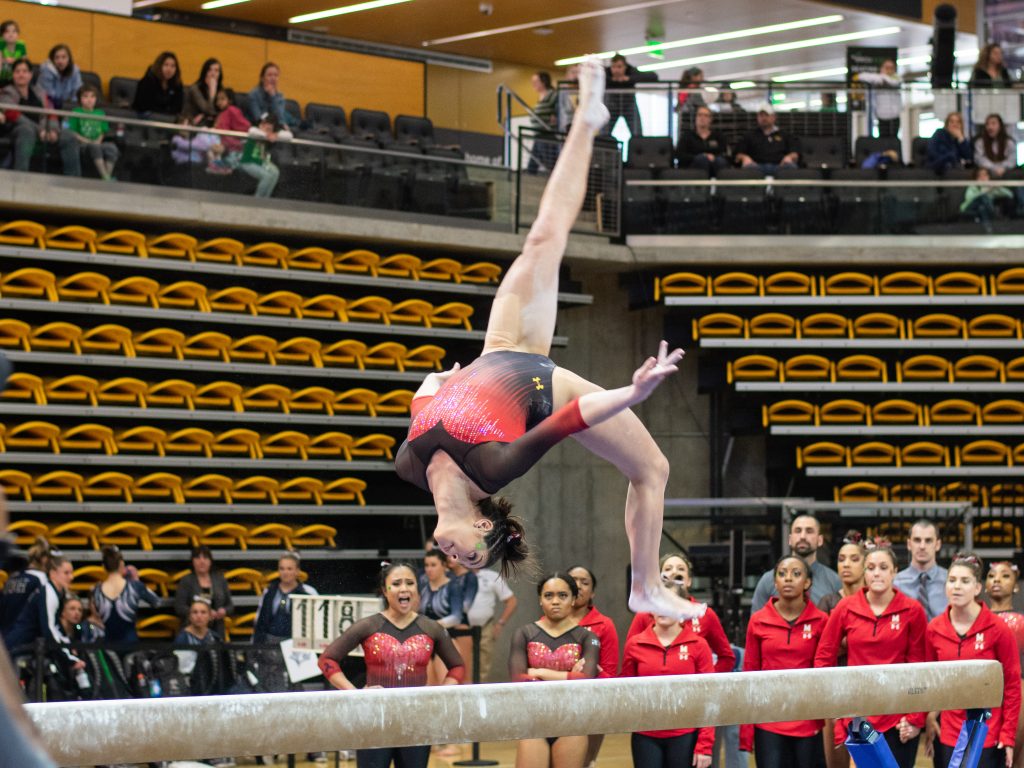 After a less-than-stellar performance during the Athens Regional, the Maryland gymnastics team looked on as Western Michigan senior Rachael Underwood completed her beam routine.

The Terps ardently cheered for Underwood, an individual all-arounder who had traveled around the mat with Maryland. As soon as her routine finished, she was greeted by a sea of high-fives and hugs from a Terps squad.

Near-unrelenting positivity was a staple of Maryland’s up-and-down season, even after the team ended the year in Athens with one of its worst scores of the season.

“It’s certainly not the way we wanted to finish,” coach Brett Nelligan said. “I know they’re a little upset right now, but in the days and weeks to come, they’ll reflect on the amazing things we’ve done this season.”

Maryland began the meet on floor, where it was forced to count a fall, leading to its second-lowest floor score of the season.

The Terps took solace in bouncing back with a 49.05 on vault, headlined by 9.85s from sophomore Audrey Barber and junior Alecia Farina and 9.8s from freshman Alexsis Rubio and junior Emma Johnson.

“Overall, the vault lineup did a very good job,” junior Tiara Wright said. “It was a very strong lineup.”

And sophomore Emilie LeBlanc credited her teammates’ energy for her performance on the final two events.

LeBlanc scored a 9.85 on bars, tying for her third-highest of the season, and closed her sophomore year with a 9.8 on beam.

“It was really fun having my teammates behind my back, really supporting me,” LeBlanc said.

Elsewhere in the beam lineup, there were two falls — a significant reason the Terps scored 194.65 overall, their lowest since January. Despite closing the season with a poor rotation, though, the team said it was proud of its effort.

“We walked out of that coliseum with our heads held high and united as a team,” Wright said. “We had a lot of energy at this meet, and there were many positive aspects that we took away.”

More than that, Nelligan said, the season as a whole was a success.

With a team still light on upperclassmen, the Terps posted the fifth-highest score in program history and entered the postseason with their highest ranking since 2013. When reflecting on the campaign, they plan to focus on those accomplishments, rather than what happened in Athens.

“This is going to rank right up there with one of our best years in program history,” Nelligan said. “That’s what we need to keep in mind going forward and let it motivate us for next year to try and do even better.”