“We plan to never forget:” Maryland football will pay tribute to Jordan McNair this season 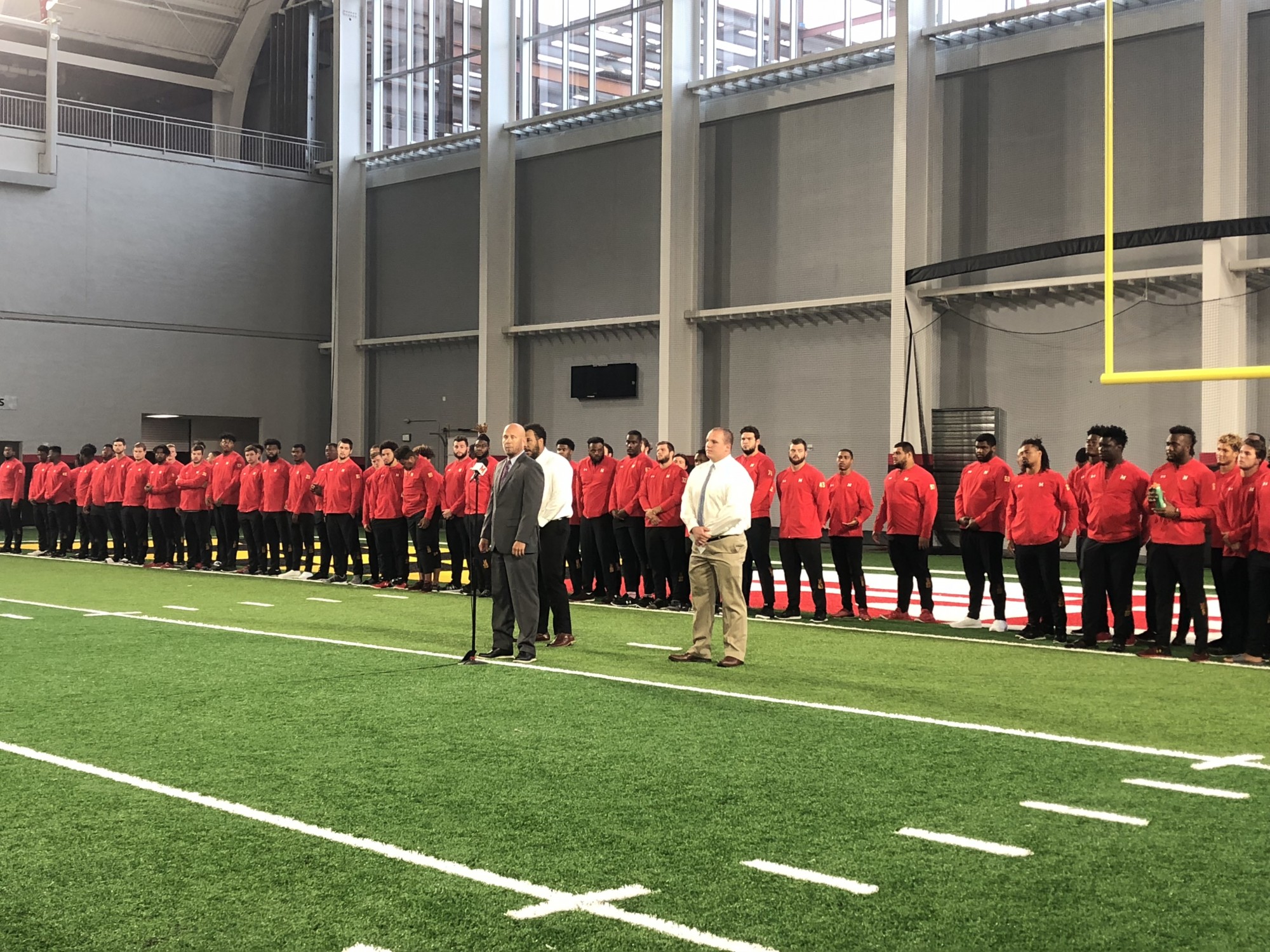 As the Maryland football team filed into Cole Field House on Monday morning, two players stood out. Ellis McKennie and Johnny Jordan wore shirts and ties, held prepared speeches and addressed assembled media largely without looking down, speaking about one former offensive lineman who no longer stood amongst them.

For the first time in College Park, members of the Terps football team shared their thoughts openly and took the chance to announce a litany of ways to memorialize Jordan McNair, the 19-year-old offensive lineman who died in June.

McNair’s No. 79 will be worn as a helmet patch this season. No player will wear the number again until after 2020, the year McNair would have graduated. McNair will be honored at Senior Day in 2020. His locker will be encased in glass through that year with a gameday setup, moving with the team to Cole Field House.

“It’s time to get back to what is important, and that is honoring our fallen friend, brother and teammate, Jordan McNair,” McKennie said. “The moment that we stop saying his name, the moment that we begin to forget, his legacy will begin to fade. But we plan to have his legacy live on forever. We plan to never forget.”

The team also announced a scholarship to be made in McNair’s name for one football player each year. Before the Texas and Temple games, the former set to be played at FedEx Field before the Terps return to Maryland Stadium, there will be a moment of silence.

McNair suffered heatstroke at a May 29 organized team workout, the Terps’ first practice of the summer, and died about two weeks later. If treated correctly, heatstroke has a 100 percent survival rate.

And earlier this month, after two ESPN articles highlighted an alleged “toxic” culture within Maryland’s football program, coach DJ Durkin and trainers Steve Nordwall and Wes Robinson were put on administrative leave, and the university formed a four-person task force to look into those allegations. Strength and conditioning coach Rick Court was also put on leave before resigning last week.

Sports medicine consulting firm Walters Inc is also conducting an investigation of the team’s player safety protocols, the results of which are expected September 15.

But at the most basic level, McNair’s former teammates have had to prepare for an ever-closer season opener against Texas on Sept. 1 while dealing with a program in flux and the loss of a friend. McKennie attended McDonogh School in Owings Mills along with McNair. Jordan was McNair’s roommate at Maryland. Both players spoke at McNair’s funeral last month.

“Jordan [McNair] was one of the best friends, teammates and roommates that anyone could ever ask for,” Jordan, a sophomore offensive lineman, said. “He was a gentle giant, and we as a team will continue to carry on his legacy through this season and far beyond.”

At Big Ten Media Days in Chicago last month, Durkin said his team would deliberate over an adequate memorial for McNair. With the Terps’ Sept. 1 season opener nearing, members of Maryland’s football program, under the instruction of interim head coach Matt Canada, unveiled that plan Monday.

The whole announcement lasted about three minutes before the team filed back out of Cole Field House to prepare for practice once more. But even during games, McKennie said, McNair’s memory will remain with the team.

“This season, Jordan’s spirit will be living within each and every one of us,” McKennie, a junior offensive lineman, said. “Every play we make, every snap we take, will be in Jordan’s honor. As I said at the funeral, Jordan was fearless. He was a dreamer. He would do anything for his teammates. He fought to his very last breath for his teammates.”