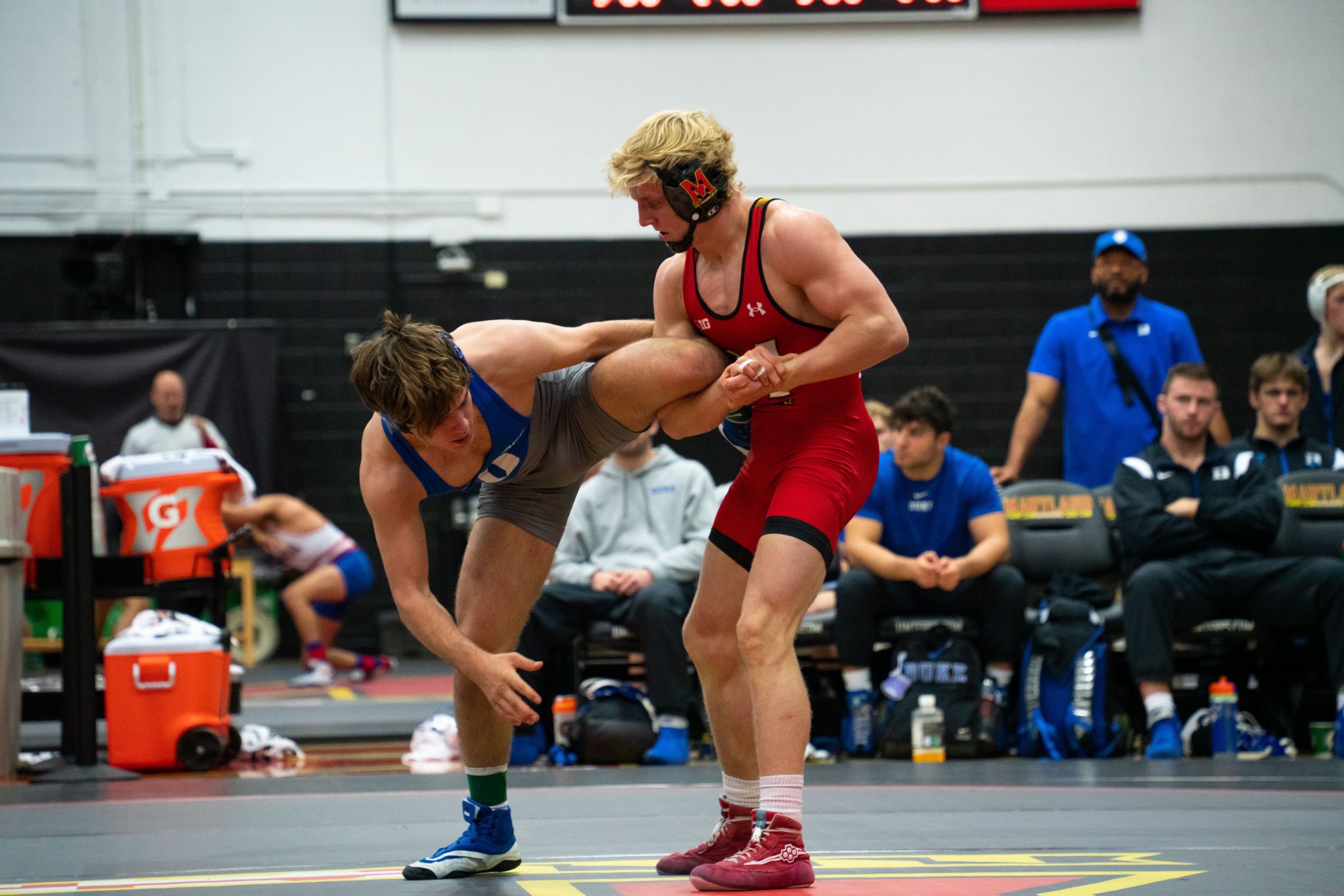 In the final bout before intermission, Maryland wrestling was deadlocked with Illinois behind impressive early performances.

Kevin Schork had the opportunity to give the Terps a lead halfway through the dual at 157-pounds. To do so, he’d need to upset Mike Carr, ranked No. 20 by InterMat.

However, Schork couldn’t generate any offense and dropped his bout via tech fall. Those were among many bonus points for Illinois, Terp mistakes compounded by a forfeit due to No. 16 Jaxon Smith’s absence, led to a 29-11 loss for Maryland on the road Sunday.

No. 18 Braxton Brown started the dual at 125-pounds and gave the Terps an early advantage with his eight consecutive victory.

After exiting the first periods with a one point lead, Brown took control in the final two minutes of the match.

Tied at 7-7, Brown appeared to take down Maximo Renteria with a one-legged takedown. After attempts by Renteria to spin out of Brown’s control, Brown was able to complete the takedown and regain the lead. The score propelled Brown to a 13-9 decision and a 3-0 lead for Maryland.

“He made a really good in-match adjustment … we played the takedown game and he just proved he’s got another way to beat ya,” coach Alex Clemsen said.

Conner Quinn fell to No. 10 Lucas Byrd by a tech fall and Kal Miller lost to No. 14 Danny Pucino by decision as that early lead turned into a 8-3 hole after three bouts.

No. 18 Ethen Miller got the Terps back on track at 141-pounds against Jake Harrier.

Miller produced the only scoring in the opening two periods, scoring two takedowns, an escape and a point of riding time to open a 6-0 lead after two periods. He went on the attack in search of big bonus points and found them.

In the third period, he gave up the escape to open the door for a takedown to make it 8-1 in the bout. He then again gave up an escape point in search of a takedown — once again doing so successfully.

He added on multiple more points as the period winded down to earn a bonus points through a tech fall, evening the team score at 8-8.

“That’s what an Ethen Miller match looks like,” Clemsen said. “Dominant position, heavy with his hands, snap down or a go behind takedown early. Gets on top, wears the guy out, and then the onslaught just begins.”

But once again, Illinois quickly took away any momentum Maryland generated.

Kevin Schork and John Martin Best both dropped their bouts as a once tied score turned into a 16-8 Illinois advantage heading into the final four bouts.

Following consecutive losses by Schork and John Martin Best, Dominic Solis tried to start a comeback with an upset victory against No. 10 Edmund Ruth at 174-pounds.

Trailing 2-0 after two periods, Solis began in the bottom position to start the third. He made multiple attempts to escape and get back to neutral position, but Ruth was too strong. He kept Solis without an escape and secured a 2-0 decision win to grow the Illinois lead to 19-8.

“[Solis] wrestled pretty well … it was a war,” Clemsen said. “I wanted to see us underneath them, and know what adjustments we need to make.”

Chase Mielnik’s loss and Smith’s forfeit sealed Maryland’s fate. Despite that, heavyweight No. 29 Jaron Smith served as the lone bright spot on the back end of the Terps’ lineup.

He scored an escape in the second period and began the final period on top. Smith prevented any offense from Illinois’ Matt Wroblewski. Smith rode his opponent’s back for the entire third period, securing the riding time point and a 2-0 decision victory and the third individual win for the Terps.