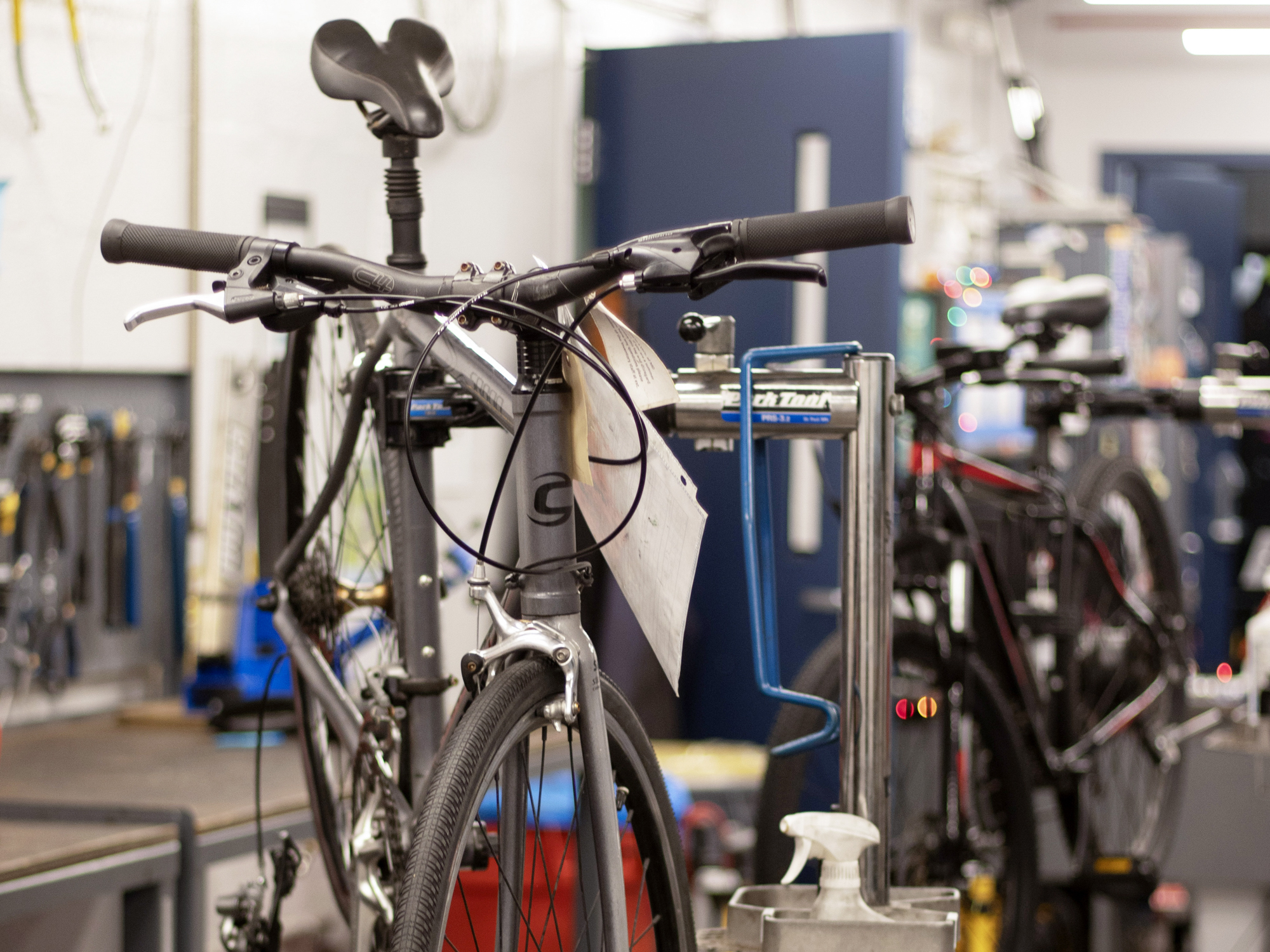 A bike on a repair station in the RecWell Bike Shop on April 5, 2022. (Daryl Perry/The Diamondback)

Several bike repair stations on the University of Maryland campus have inadequate tools for bike repairs and broken air pumps, causing frustration among students who bike.

Repair stations are audited twice a year for maintenance and new bike pumps have been ordered, according to DOTS.

It is not clear when the new pumps will arrive or which stations will get replacements.

“If they do fix [the repair stations], I’ll feel great about it. I look forward to using them in future,” Kenny Chung, a junior who uses his bike to get around College Park, said.

Chung said he thinks bike infrastructure at this university is severely lacking and does not trust DOTS.

“I can’t really rely on them to get that fixed any time soon,” Chung, an electrical engineering major, said.

Chung was recently caught on the campus with a flat tire. He tried the pump near the computer science building and found it broken. He then carried his bike to the pump near the A.V. Williams Building and found it broken as well. Eventually, Chung carried his bike up Stamp hill and filled his tire at the student-run bike shop, located at the top of Union Lane Parking Garage, in the Jones-Hill House.

Though he uses the bike shop frequently, Chung said he lives far enough away that the repair stations near him would be more convenient.
Shubham Ramraja Takbhate, a graduate student studying robotics, also struggles with the bike repair stations. Takbhate said when he’s used them in the past, he wished a wider variety of tools were available to account for factors like different sized tire valves on different bikes.

Independent from the bike repair stations, there are other bike pumps available during school hours. Students can ask to use the bike pumps at the DOTS office in Regents Garage and at the Maryland Adventure Program rental desk at Eppley Recreation Center. With University ID, there’s a bike pump available at McKeldin Library.

John Evans, a graduate student and the data analytics director for Terps for Bike Lanes, a student organization that campaigns for safer campus bike infrastructure, said he uses the bike shop frequently because it is convenient and the staff are helpful and informative.

Evans said the repair stations are not practical because there is always a chance it won’t have the right tools, and there are no replacement parts, which is why he opts for the bike shop instead. He only knows of one of the bike repair stations on the campus, which he said was blocked off by construction the last time he was there.

“I don’t know how much of a value-add they are in that respect,” Evan said.

Evans feels the university is making the easy changes with the potential new pumps and the sidewalk safety “tiger team” that university Vice President Carlo Collela is leading.

Elizabeth Case, a junior government and politics major, is one of the university bike shop’s supervisors and the external president for Terps for Bike Lanes.

Case recently tried to use the repair station near the Iribe Center for a quick fix, but the bike pump was not working, so she went to the bike shop instead. She said the stations need to be covered from the elements to protect the tools from rust.

“There’s a lack of bike infrastructure or anyone making sure the bike repair stations are working,” Case said.