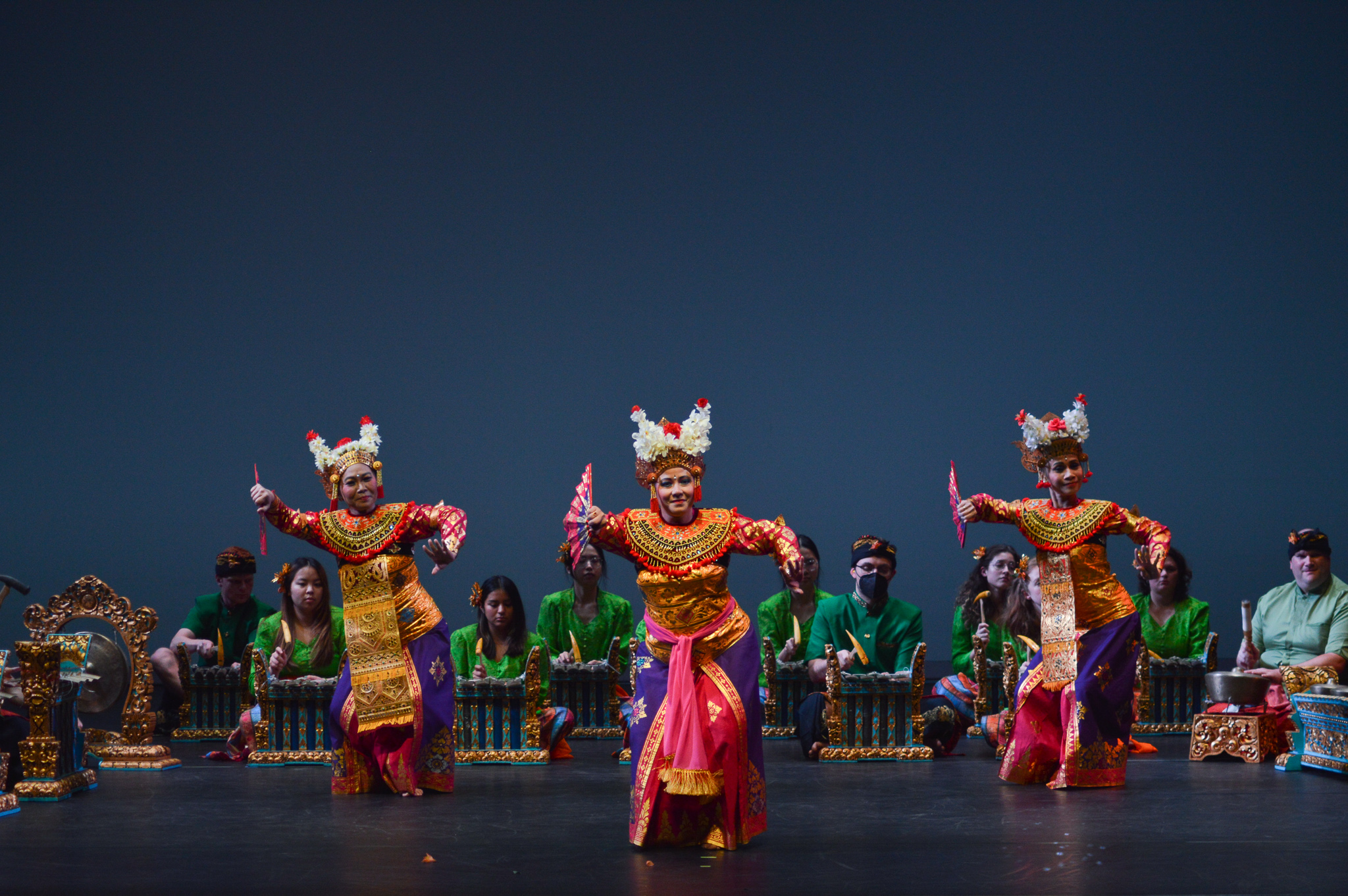 Dancers accompany traditional Balinese music performed by the UMD Gamelan Saraswati Ensemble during An Evening of Japanese Koto and Balinese Gamelan, a concert held at the The Clarice Smith Performing Arts Center and sponsored by the UMD School of Music. (Giuseppe LoPiccolo/The Diamondback)

By Joseph Francomano
For The Diamondback

“It’s music you don’t always hear,” audience member Jen Sherman said. “It’s really nice to come in and hear something different and have an intercultural experience.”

The instrument is a six-foot-long zither, a wooden board with strings that attach on either side of the board. The koto contains 13 strings on top of bridges that can be adjusted for different tunes.

The Koto Ensemble was made up of beginner and advanced koto students and alumni.

The Koto music consisted of peaceful harmonies that were played by the performers using picks on their thumbs and the first two fingers on their right hands to pluck the strings on the zither.

[Kaleidoscope of Bands showcases the variety of UMD community bands]

“I found the koto to be very meditative, and then it could be super invigorating,” Sherman said.

Following the koto performance and an intermission, the UMD Gamelan Saraswati Ensemble performed its concert.

A gamelan is a musical ensemble from Indonesia that features xylophones and gongs.

The gamelan performance also included a dance, which is a major component when performed in Bali. This is traditional because the details of the dance gesture are synchronized with the music’s tone, according to the performance’s program.

Emilie Flores, a second year graduate student played one of the xylophones in the gamelan. She started learning the music just this semester after hearing the group rehearsing.

She said the most difficult part was that they don’t give out sheet music so she’d just have to memorize the tune. Still, Flores said the instrument wasn’t too difficult to pick up.

“You just kind of get the melody in your head,” Flores said. “If you, for some reason, make a mistake, [there are only four keys] so it still kind of works.”

Chris Gray, another audience member, became interested in Gamelan through American composer Lou Harrison. In looking for things to do, Gray found this performance online.

“All the cool instruments and colors and the momentum and the music is just so cool,” Gray said.