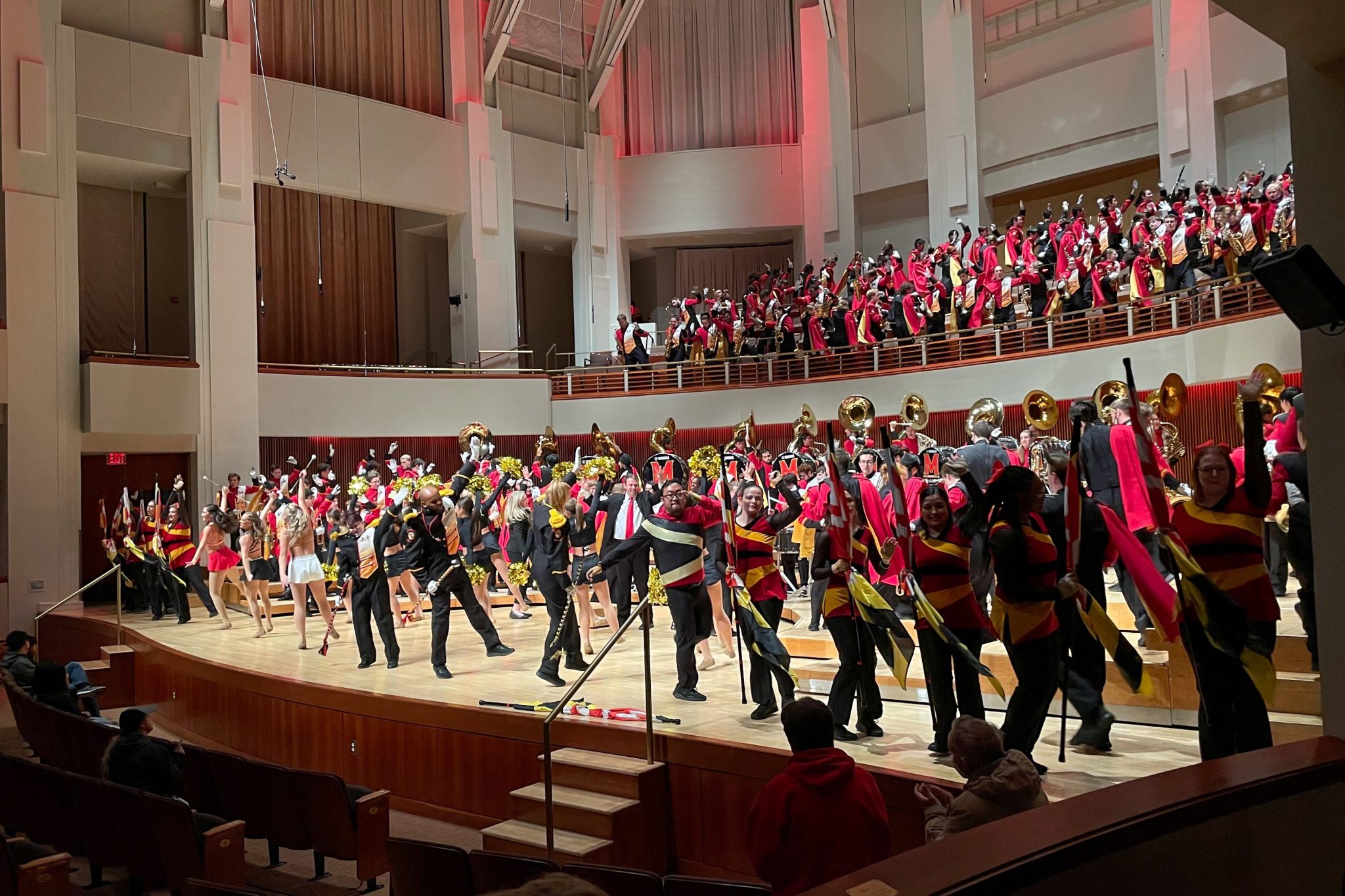 The Mighty Sound of Maryland performs during the Kaleidoscope of Bands concert on Dec. 2, 2022. (Ian Dalrymple/For the Diamondback)

By Ian Dalrymple
For The Diamondback

The University of Maryland’s Kaleidoscope of Bands brought together a collection of some of the community’s bands Friday evening, attracting an engaged and supportive crowd.

“People were quiet and polite and clapping politely,” Rachel McCusker, a Carroll County music teacher and mother of one of the musicians, said. “Then, when the marching band came out, they were marching and hooping and clapping and yelling along.”

The concert, held in the Dekelboum Concert Hall of the Clarice Smith Performing Arts Center, featured a variety of performances from the University Band, the Maryland Community Band and the Mighty Sound of Maryland Marching Band.

The show kicked off with the University Band creating a more relaxed vibe, reminiscent of a traditional classical music concert.

Then the Maryland Community Band — consisting of alumni, faculty and staff as well as Washington and Baltimore based musicians — followed suit. The band performed more festive pieces such as James Pierpont’s “Jingle Bells” arranged by Morton Gould.

Following the Maryland Community Band’s performance and a brief intermission came the final act of the show, the Mighty Sound of Maryland Marching Band, which brought a wholly unique sound with it.

As a classical music student at this university, Shoop appreciated the variety of the show.

“It was cool to see a different kind of music that goes on here. And also to see all the visual performers like the twirlers and the cheerleaders and everything, because that’s not something that we get to do a lot,” Shoop said.

Dillon Capalongo, an alto-saxophone player in the marching band, considered the performance a defining conclusion to the band’s hard work this fall.

“We’re all relieved right now more than anything. It’s been amazing to be done,” the junior mechanical engineering major said. “It really is the culmination of our entire season. Just being up there and playing all the different songs I knew straight from the top of my head. It was really exciting. And this reminded me of the good times I had this semester.”

Lined up behind a row of dancers and playing a variety of modern hits including renditions of “Toxic” by Britney Spears and “We Don’t Talk About Bruno” from the movie Encanto, the Mighty Sound of Maryland Marching Band brought members of the audience out of their chairs to close out the show.

“Everyone was excited. Everyone was up on their feet, you know, moving around. Good time,” John Kallaur, a Dulaney High School senior, said. “The sense of pride and community shown by the marching band, that’s something I wish to be a part of.”

CORRECTION: A previous version of this story misidentified dancers as cheerleaders. This story has been updated.
Please support our journalism by donating to The Diamondback.
Categories:
Tagged: