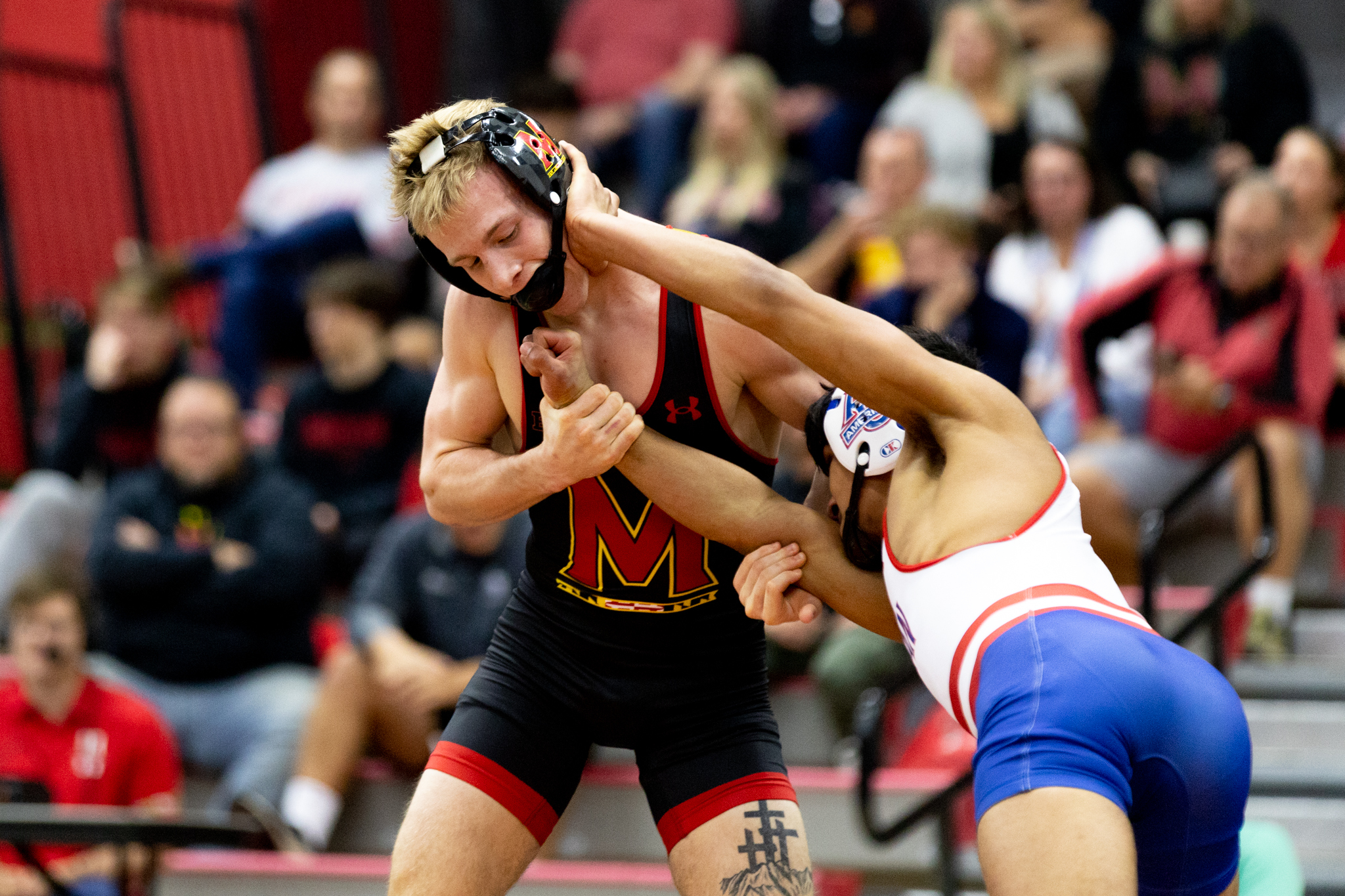 After a back and forth match, Maryland wrestling’s perfect start to its season came down to the final two bouts of the day.

No. 20 Michael North and No. 22 Andrew Cerniglia were locked in a battle at 157-pounds. Scoreless after two periods, North was able to take control of Cerniglia for the entire third period, scoring an escape and earning the riding time point to win by a 2-0 decision.

Lucas Cordio couldn’t get a win over Val Park, but he limited Park to only a decision victory. It wasn’t enough for Navy as the Terps took the victory to mark their first 5-0 start since 2011, defeating Navy 18-15.

“I had a lot of nerves running, a lot of pressure coming in because I knew I had to pull through for the team,” North said.

Starting the match at 174-pounds, No. 27 Dominic Solis was dueling with Sammy Starr. After a scoreless first period, there was still no separation between the two as the bout went on.

After trading escape points in the second and third period, a second stall call on Starr awarded Solis a point, and that was the difference. He was able to hold off attacks from Starr to get the Terps started with a 2-1 decision win.

No. 12 Jaxon Smith wasted no time getting after No. 26 Jake Koser at 197-pounds. Two first period takedowns and two near fall points for Smith gave him a comfortable 6-1 advantage after the first period.

Leading 7-3 after three bouts, another top ranked matchup pitted No. 20 Jaron Smith with No. 18 Grady Griess in the heavyweight bout.

Smith scored an early takedown in the first, but surrendered an escape and a reversal and trailed 3-2 early in the second.

With his back on the mat, Smith scored a reversal of his own to take a 4-3 lead in the bout. After a Griess escape, the bout was tied at 4-4 heading into the third period.

Griess scored a big takedown early in the third, and he was able to ride Smith’s back to limit his ability to score an escape and take the bout by a 6-5 decision.

Going to the top of the lineup at 125-pounds up 7-6 thanks to Jaxon Smith’s bonus point with his major decision victory, No. 23 Braxton Brown was able to extend Maryland’s lead.

Brown got an early takedown of Grant Treaster in the first, taking a 2-0 lead in the bout and accumulated riding time all throughout the period.

More of the same for Brown continued into the second period. Brown scored another takedown and two near fall points to lead 6-1 after two periods, all while gaining enough riding time to secure the point after two periods.

Brown was able to limit Treaster from scoring anything in the third period, getting a big 13-1 major decision and scoring another bonus point for Maryland.

“Just keeping that right mindset and going in and wrestling to the best of my abilities,” Brown said. “Just giving everything I got and leaving it all out there.”

Jackson Cockrell had the opportunity to extend Maryland’s lead to its largest of the match, but was unable to do so against Tyler Hunt at 133-pounds.

Hunt scored two takedowns, one in the first period and one in the second period, to take a 4-0 lead to the third period.

Looking to avoid giving up anything bigger than a decision win, Cockrell scored three points in the third period and staved off a major decision for Hunt.

Down 2-0 early, a Miller escape was canceled out by a Koderhandt reversal, as Koderhandt took a 4-1 advantage into the third period.

Koderhandt rode the back of Miller the entire third period to get the riding point, and defeated Miller by a 5-1 decision.

Going into the 149-pound bout trailing for the first time all match, No. 19 Ethen Miller needed a big result. Up against James Latona, Miller took a 4-0 into the second period. With the possibility of bonus points, Miller took advantage.

“We were hunting for bonus points,” coach Alex Clemsen said. “Our guys knew that it could come down to bonus [points].”

North had the opportunity to give Maryland a huge advantage heading into the final bout of the day, and he was able to do just that.

North scored a second period escape against No. 22 Andrew Cerniglia, taking a 1-0 lead into the third period. North was able to ride the back of Cerniglia to start the third to get the riding time point, and that proved to be the difference.

The Terps held on to win, escaping with a victory to keep their undefeated season rolling with the prospects looking positive in College Park.