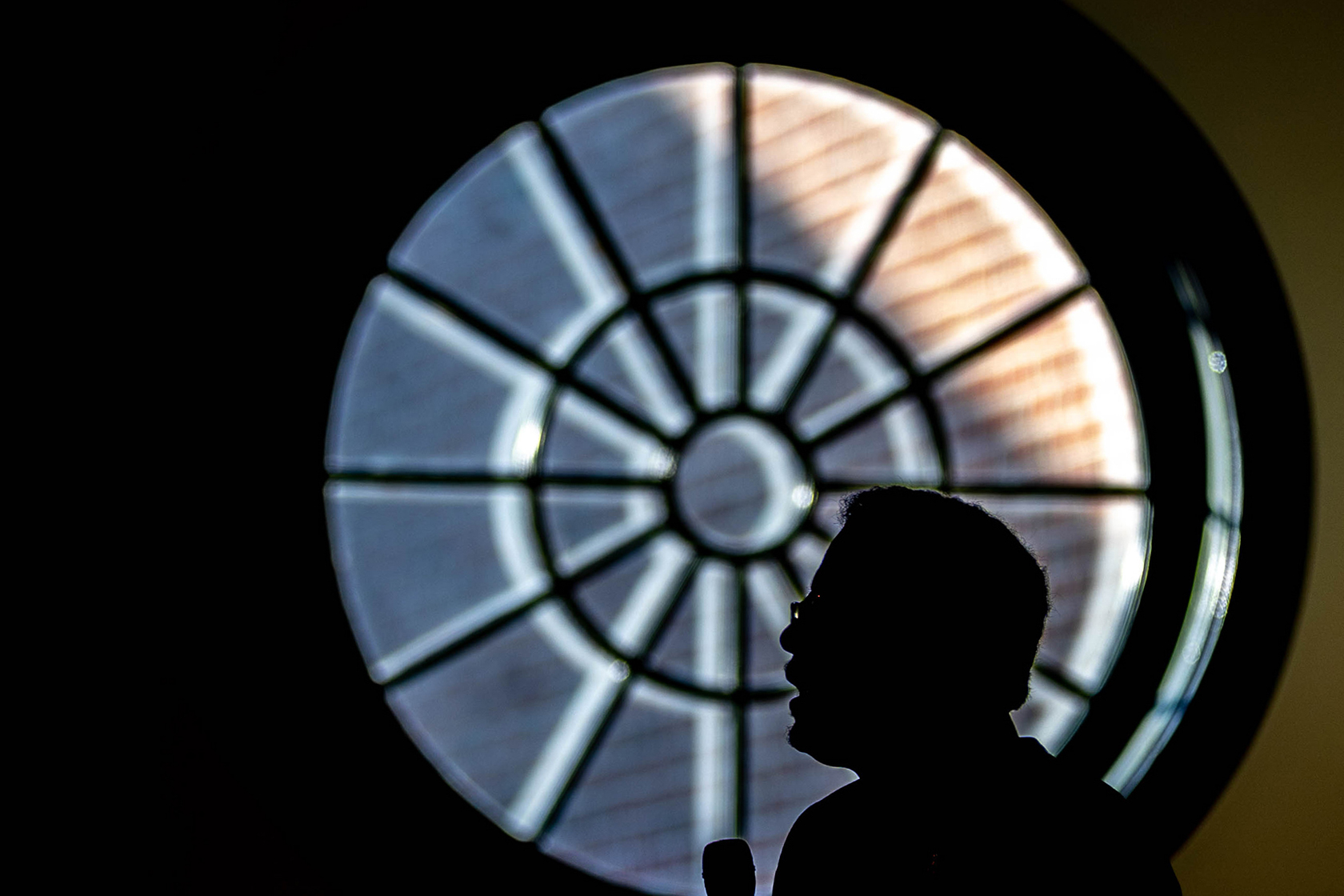 University of Maryland President Darryll Pines delivers the State of the Campus address in front of the university senate on Nov. 10, 2021. Pines introduced the idea to create five new cultural centers to increase awareness of the university’s cultural diversity. (Julia Nikhinson/The Diamondback)

Population surveys always give me the biggest identity crises. I’ve never once found a Middle Eastern and North African option listed, which puts me in a difficult situation. While I usually just give up and list myself as white, I know this does not truly represent me.

Growing up, I always felt left out demographically, and frequent reminders such as this only compound those feelings.

Last year, University of Maryland President Darryll Pines introduced the plan to create five new cultural centers to increase awareness of this university’s cultural diversity. However, no such center was announced for Middle Eastern and North African students, despite the plethora of MENA clubs and organizations on the campus. These clubs represent unique components of MENA students and could greatly benefit from a MENA cultural center that builds a collaborative inter-cultural community.

Put simply, this university needs to work harder to understand and incorporate MENA students into the greater campus culture. To do that, the university must fix its data collection for MENA students as well as create a MENA Cultural Center on campus. Not only could these changes benefit MENA students, but the university can become a leader in MENA student organization in the United States.

As a MENA student at this university and in the United States, despite my community’s obvious underrepresentation, we tend to be viewed as white. However, the cultural practices across the group — both shared and unique — separate us from our white counterparts. Further, considering we possess none of the privileges of white Americans, it does not make sense for us to be cloistered into the white demographic.

I’m not perceived as white by my peers, nor do I identify as white. In fact, a study released earlier this year shows many MENA Americans don’t view themselves as white, despite being forced to self-identify as such on census reports and population surveys. It’s clear as a group, we need to be able to self-identify and gather information about ourselves in ways that do not betray our shared cultural values.

Adding a MENA category to demographic gathering mechanisms would not only provide better research, health, race and ethnic information about the United States in general, but it would also help develop an established identity for people — such as myself — who have been forced to ignore their cultural practices on census reports and population surveys.

Better understanding of the unique experiences of students at this university and around the country will not only benefit MENA students directly through inclusion, but also in their ability to mitigate other pertinent community issues. Important societal issues MENA Americans face, such as Islamophobia and anti-Arab discrimination, cannot be defeated unless we begin building the necessary institutions and representation of Arab minorities.

There are many MENA student organizations on the campus, such as the Egyptian Student Association, Muslim Students’ Association, Organization of Arab Students and Students Justice for Palestine, and I have participated in many of them. However, I have noticed these groups only incorporate fractionalized aspects of MENA culture into their activities. Each club represents only an aspect of MENA cultures and ethnicity, and there’s an opportunity for a more inclusive MENA community on the campus by creating a shared space for all MENA students.

Thus, in addition to better tracking MENA statistics through demographic survey data, this university should build a MENA cultural center on the campus to serve as an important connector between group-specific campus organizations. It will become easier to facilitate events and political demonstrations as well as contribute to a more comprehensive MENA cultural presence if there is that shared space on the campus.

By implementing a MENA cultural center on the campus, the university can provide better institutionalized recognition and acceptance of MENA students.

Adding a MENA category to census data or creating a MENA cultural center on the campus may not appear as a monumental change to campus life, but it makes a world of difference to MENA students such as myself. It legitimizes our existence and acknowledges the important role our culture, ethnicity and perspective provides to the university environment.

Recognition is a key aspect of acceptance and inclusion. Peers and the greater university administration need to formally recognize MENA students, and there are two clear ways to begin that journey: better demographic data and a MENA cultural center here on campus.