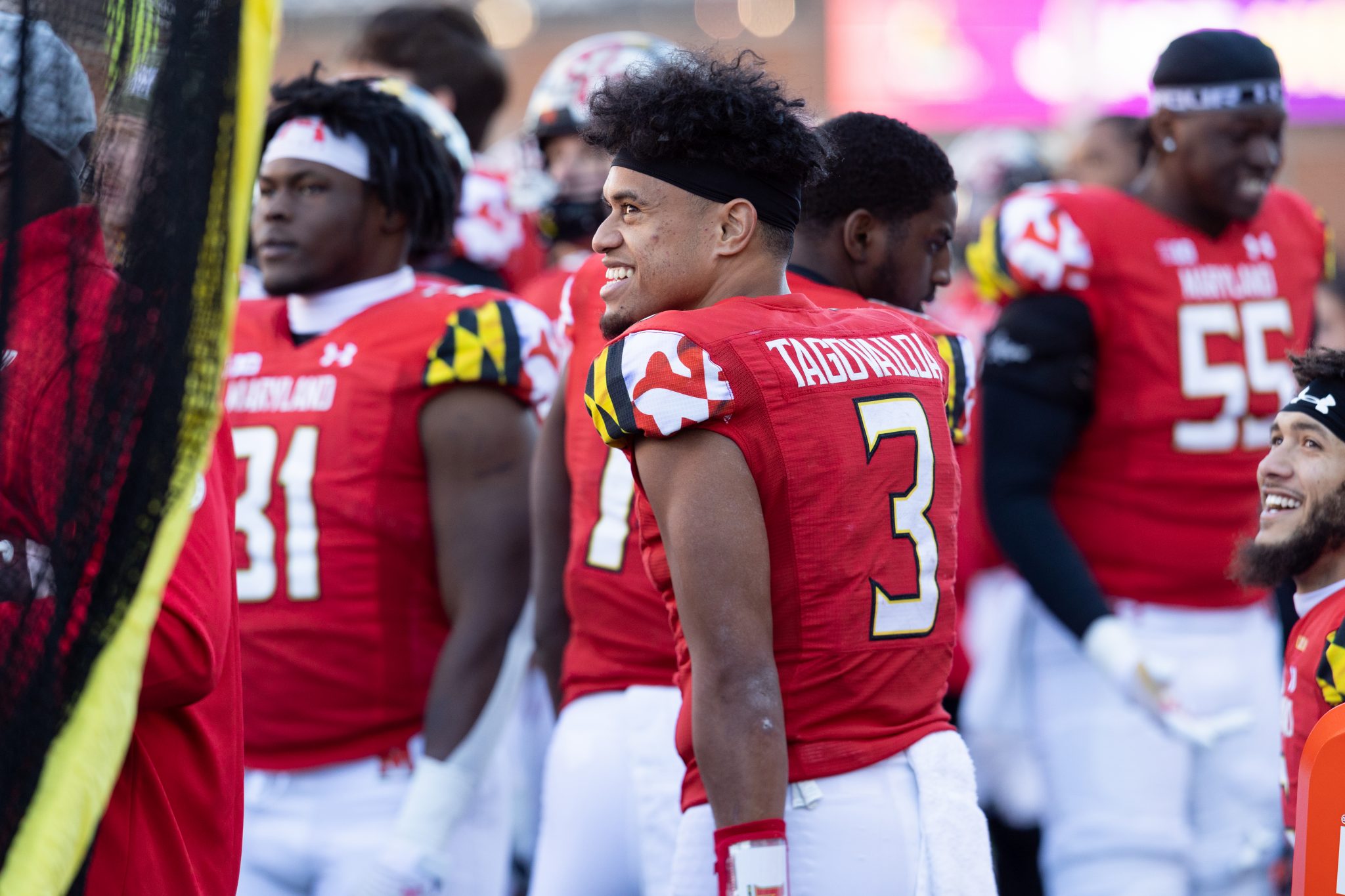 The 27-yard catch and run into the end zone for the senior receiver increased an already gaudy Maryland football lead, but the score meant more to the quarterback. The pass marked Tagovailoa’s 50th passing touchdown as a Terp, setting the program record that he previously held alongside Scott Milanovich.

The milestone came as Maryland demolished Rutgers in its regular season finale, 37-0. The win secured the Terps a winning record for the second straight season.

As the offense returned to the bench, the in-stadium announcer told all in attendance about his achievement.

“He tried to act like he didn’t hear,” Jones said.

So the receiver grabbed Tagovailoa’s hand and lifted it into the air. The quarterback responded in turn, as the two lifted each other’s arms up and stood to receive the SECU Stadium crowd’s cheers.

“He’s a senior, he’s been through a lot …for him to have the game that he’s had … I just wanted to make him feel special,” Tagovailoa said of the moment.

He finished 25-37 for 342 yards and the lone touchdown to Jones, the quarterback’s second straight game with over 250 yards.

[Maryland football has opportunity to establish consistency against Rutgers]

Tagovailoa briefly exited the game near the end of the first half with an apparent knee injury, forcing Eric Najarian into action, but returned at the start of the second half to lead the Terps on a 75-yard touchdown drive. Najarian re-entered the game the drive after Tagovailoa’s record-setting touchdown.

“It was an easy decision for me,” Tagovailoa said on staying in the game. “Just because, we’re playing for the seniors, trying to [send] them out the right way. The things that they did, the years that they’ve been here sacrificing their body, their time … it’s only right for everyone on our team to give it their all.”

Jones, who was celebrated in a pregame senior day ceremony, quickly emerged as his primary target. The receiver had a career-high 152 yards on nine catches in his last game in College Park — potentially ending a home collegiate career that started in 2018.

The low passing touchdown figures came because the Terps repeatedly turned to running back Roman Hemby at the goal line. All three of the freshman’s scores came from within the ten-yard line. Hemby finished the regular season with 924 rushing yards and 10 touchdowns.

Maryland’s defense earned its first shutout against a Big Ten opponent in program history. It forced Rutgers to go 3-and-out on its first three drives, nine plays where they accumulated 12 total yards. The Scarlet Knights’ fourth drive lasted longer, a grand total of five plays, but ended with a loss of three yards on fourth-and-one.

No Rutgers rusher or receiver exceeded 20 yards in the first half and its offense only ran two plays in Maryland territory through three quarters.

From there, the visitors’ punt parade continued. Ray Guy semifinalist Adam Korsak stepped back on the field to finish off the next three drives before a kneel down mercifully ended the Scarlet Knights’ dreadful first half.

The Terps allowed just 135 total yards throughout the game.

“Our defense has been improving all year long,” Locksley said. “The first shutout since we joined the Big Ten which is a great feat no matter the opponent.”

It looked like the Scarlet Knights’ defense might match the Terps at the start of the game, subjecting the few fans at SECU Stadium to a defensive slog. Maryland marched down the field on two of its first three drives but fumbled twice in Rutgers’ territory.

But Tagovailoa, Jones and Hemby quickly established an offensive rhythm. A year ago, the Terps’ matchup against the Scarlet Knights pitted two teams that needed a win to reach bowl eligibility. Maryland trampled its East coast opponent to head to a bowl.

This season’s matchup had no such implications, the Terps clinched a bowl berth weeks ago and Rutgers came into the game with just four wins.

But the win marked a significant milestone — tying a program record for Big Ten wins.

“Finishing 7-5, a little better than a year ago, which continues the right kind of trajectory by our team,” Locksley said.

His contract also included an automatic one-year extension for the 2027 season if the Terps finished this year with seven wins, which Saturday’s win did.

His partnership with Tagovailoa has proved fruitful for the tandem and the school they represent, setting new program records for passing success.

“I’m here for the long haul. This is where I’ve always wanted to be,” Locksley said. “We’ll continue to try to build this thing, I think anybody that’s watched the trajectory of our programs sees the improvement.”