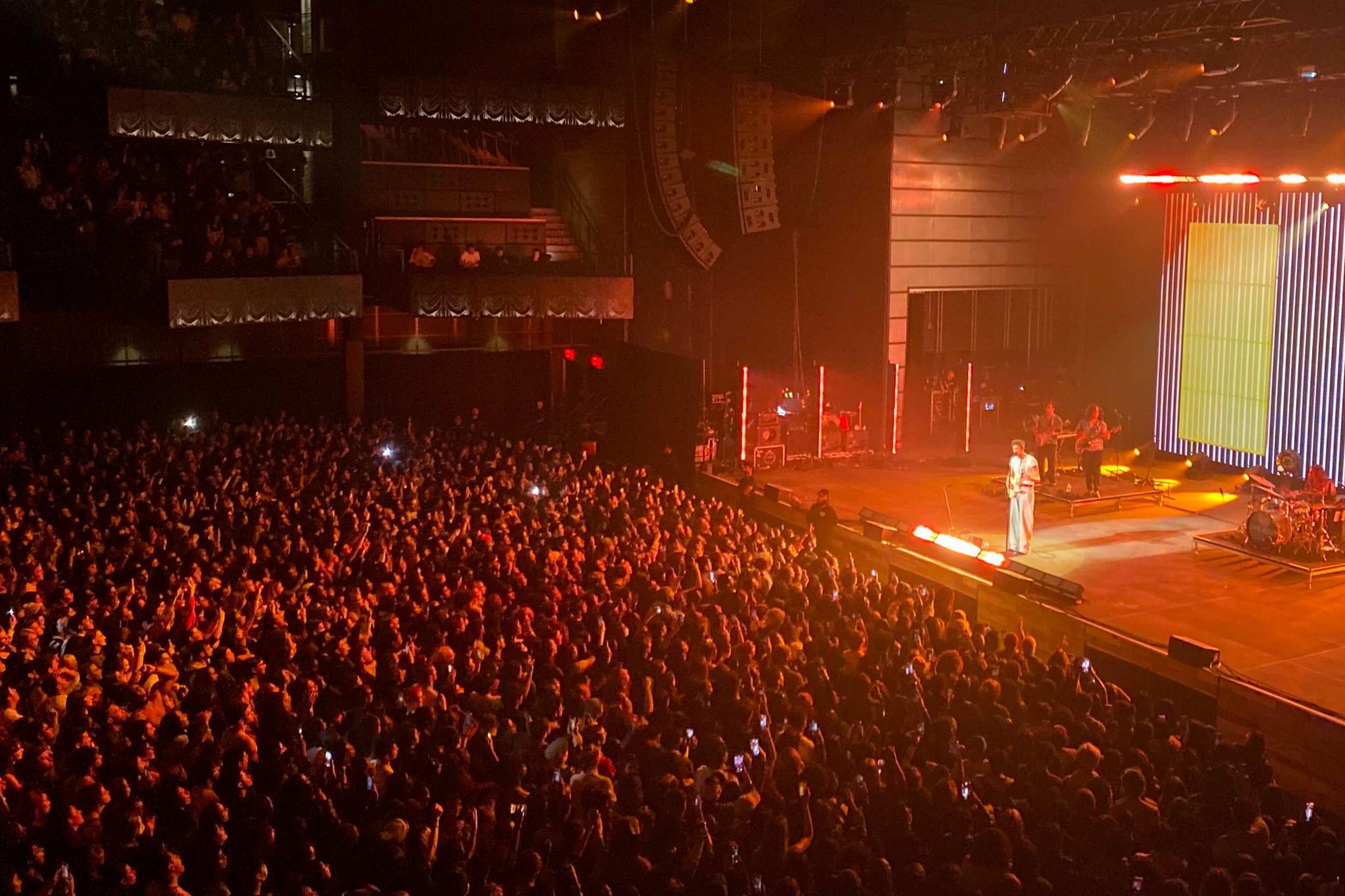 Through the gaps of arms flailing in the air, fans on the floor of The Anthem in Washington, D.C., gathered glimpses of Omar Apollo as he turned, popped and locked on the stage.

Green buzzed hair, red beanies and pink braids bopped atop leather jackets and crew necks with dress shirts flapped over the neckline. A dance circle broke out among friends in front of me; with fists up and one shoulder nudged in, all together they bounced into the circle — bounce, bounce.

The lively and loving crowd packed The Anthem’s floor and tiered balconies on Thursday to welcome Apollo, a 2023 Grammy-nominated artist to the country’s capital. But Apollo’s performance reached far beyond his usual heartfelt R&B with tunes that paid homage to his Latin roots and infused electric pop and rap sounds into a style that was uniquely him.

Apollo loves the spotlight, and he wasn’t shy about letting the audience know that. Yet, he didn’t let that stop him from being aware of his fans. Throughout the concert, Apollo stopped multiple times to make sure security could get to people for medical reasons. Nevertheless, Apollo rarely missed a beat.

Starting off a bit shy with some of his older songs, Apollo’s face faded in and out on the large screens behind him. A deep bass melody was plucked from his guitarist’s strings as a mix of royal purple and vibrant red cast down onto the stage toward a crowd of hands in the air with finger guns pointed back at him, signaling how Apollo’s lyrics spoke to them.

The smell of weed began fading from the puffs of smoke that rose during the opener’s setlist. R&B and soul singer Ravyn Lenae warmed the crowd up with her high-octave, sweetheart pop vocals that playfully engaged the audience before her band ravaged their instruments.

Flipping up his hair in what appeared as a flash of a black cloud above his head, Lenae’s guitarist shredded his electric guitar as the red spotlight entrenched him. Swinging his instrument behind his head and turning his back to the audience, the guitarist fingered the strings with blind precision.

Two or three songs into his set, Apollo started getting comfortable. With heels knocked together, he turned in place before effortlessly leaning back and reaching out his arm; he gave his entire body to the music. An undertone of cheers, laughter and liveliness flowed from one song to the next as the audience became an integral part of the performance.

“How many homosexuals are here?” Apollo asked with a smile. “Where the Mexicans at?”

A Mexican flag hung down from the balcony as one fan stood up from her seat with arms stretched out to Apollo, who was singing in Spanish. Without wavering, voices filled the auditorium — not many fans knew the Spanish words, but those who did sang twice as loud.

Amping up the acoustic guitar, his guitarist plucked the strings in traditional Latin folk style while a girl in the audience twirled in her friend’s arms. Moving into his newer music, Apollo continued shaking his hips, this time, encouraging fans to join him.

With a solid setlist, Apollo guided the crowd into slower, gentler songs such as “Evergreen” in between the tunes that brought fans’ feet off the floor. Even walking the line between the two styles, Apollo’s “Invincible” prompted bodies and raised cell phones to sway. Toward the finale, Apollo’s rhythm and visual elements sucked the audience into his music and left them wanting to stay.

“Otra, otra,” one audience member yelled before Apollo jumped back on stage for an encore.

The drummer’s stick rattled the cymbal as the stage lights doused Apollo in purple. Chunky loafers managed to separate themselves from the sticky, beer-covered floors near The Anthem’s bar as fans danced in free-spirited, lively jubilation.

The concert was coming to a close, but the night was well spent. The crowd wasn’t sad it was over, instead, the room cheered in contentment. Fans seemed happy to have the experience rather than wishing it would never end.