What does the campus fox say? UMD community shares interactions. 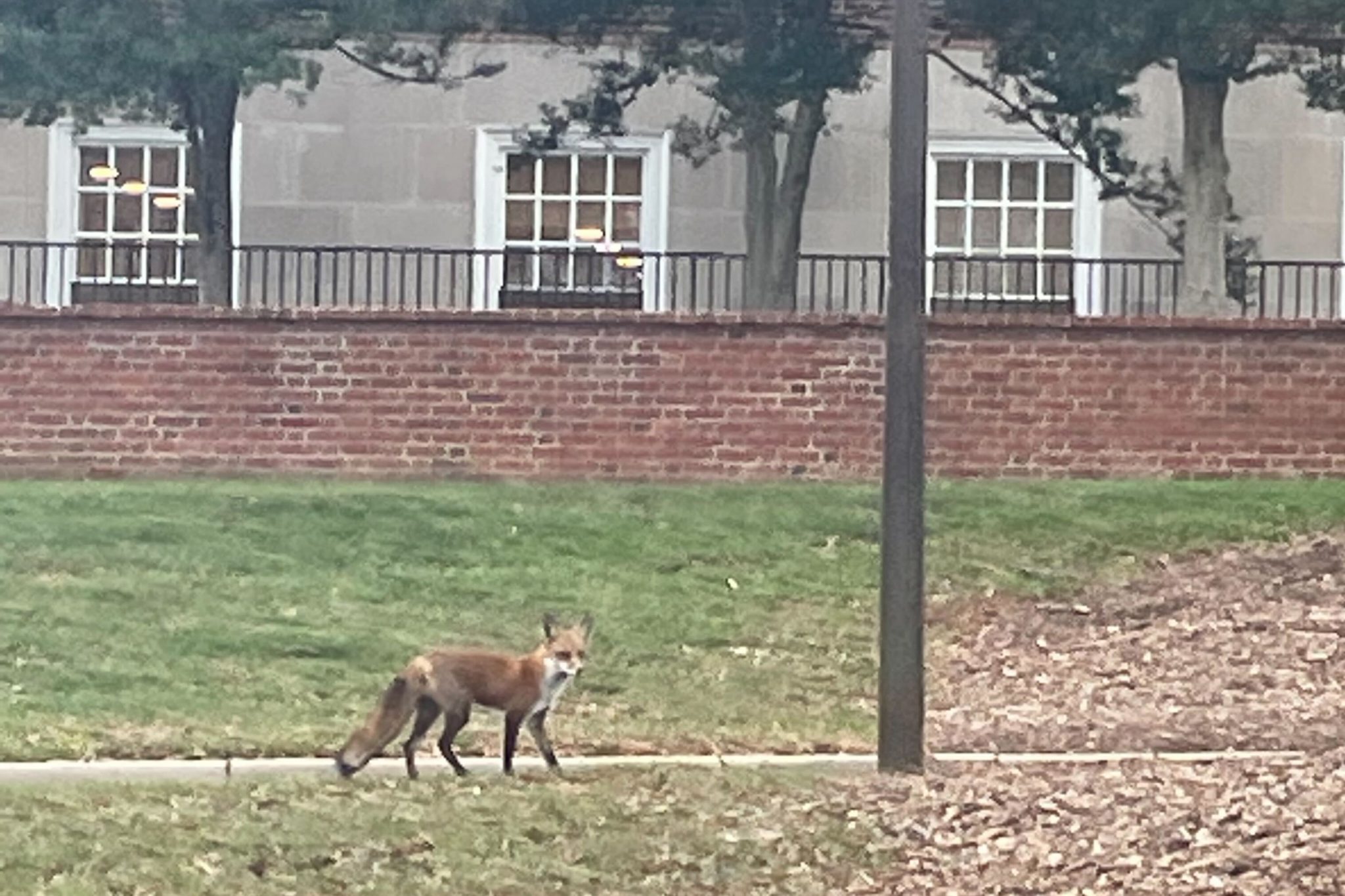 Kali Wade was on Paint Branch Trail walking with her sister and her friend when she first encountered the University of Maryland campus fox. It seemed not at all afraid or even caring they were there.

“The first thought was, ‘Oh my gosh, does it have rabies?’” Wade, a junior supply chain management and marketing major, said. “Most people don’t get to see a fox that close up.”

A few weeks ago, a red fox made the heart of the University of Maryland campus its new home. Students have spotted this fox near the Iribe Center, on McKeldin Mall and near Paint Branch Trail, igniting a slew of student social media discourse and discussions of its safety.

Jennifer Mullinax, an associate professor in the environmental science and technology department, said it is not unusual to have foxes on the campus and that for the fox, the campus poses many benefits.

College campuses are “ideal,” for foxes because of the many places to burrow, the abundance of food in mice, rats and squirrels, and the relative safety from heavy traffic, Mullinax said. Red foxes are particularly clever and are able to quickly shift their activity from night to day. This university has foxes on the golf course, behind Xfinity Center and off of Paint Branch Trail, Mullinax said.

“This fox just happens to be setting up their main range right in the middle of big buildings with classrooms, and so people are seeing it much more readily,” Mullinax said. “This particular fox is just kind of a glam fox.”

Some students at this university have expressed worry over public health issues that the fox could pose. Wild animals such as foxes tend to carry a lot of diseases, said Kevin Joo, a second year computer science graduate student.

According to Mullinax, animals with rabies approach humans, are aggressive and release excess saliva. Rabies is one of the major diseases to worry about between humans and foxes, but the disease is “exceedingly rare” in foxes, and this fox doesn’t seem to have rabies, Mullinax said.

“I’ve seen numerous videos now of this fox, and there isn’t one sign that there is anything rabies-like,” Mullinax said. “Right now, we’re just dealing with a fox that figured out that this is a great place to live.”

Andrew Bonicker, who saw the fox near the Iribe Center, feels concerned for it and worries it might be euthanized and taken away if students are afraid.

“Most people say that [the fox] might be rabid … but he looks fine to me,” Bonicker said. “It was prancing around, happy looking.”

Frances Schoenly, a freshman atmospheric science major, saw the fox recently and was also worried about it. At McKeldin Mall on Monday evening, the fox was limping on the grass, Shoenly said.

Schoenly described the fox’s lack of hesitation around humans as “the scariest part” of her fear for the fox’s wellbeing. Since the fox does not run from humans, Shoenly said it could be caught off guard by students on scooters. She added it shouldn’t be eating trash from students, and suggested covering campus trash cans to protect it.

This university’s facilities management department said staff are monitoring the fox’s movement and habits, and hoping it moves off campus on its own. Students should avoid contact and should not feed the fox, they said. Facilities Management is also considering trapping options if necessary.

Mullinax echoed this warning about contacting the fox. Engaging with and feeding wildlife is to their detriment, and closeness to humans is what puts them in danger and makes them a nuisance and public health hazard, Mullinax explained.

“This is not a pet cat or a domesticated dog. This is a wild animal,” Mullinax said. “We want them to stay wild while we can still appreciate the fact that they’re living on our campus with us.”