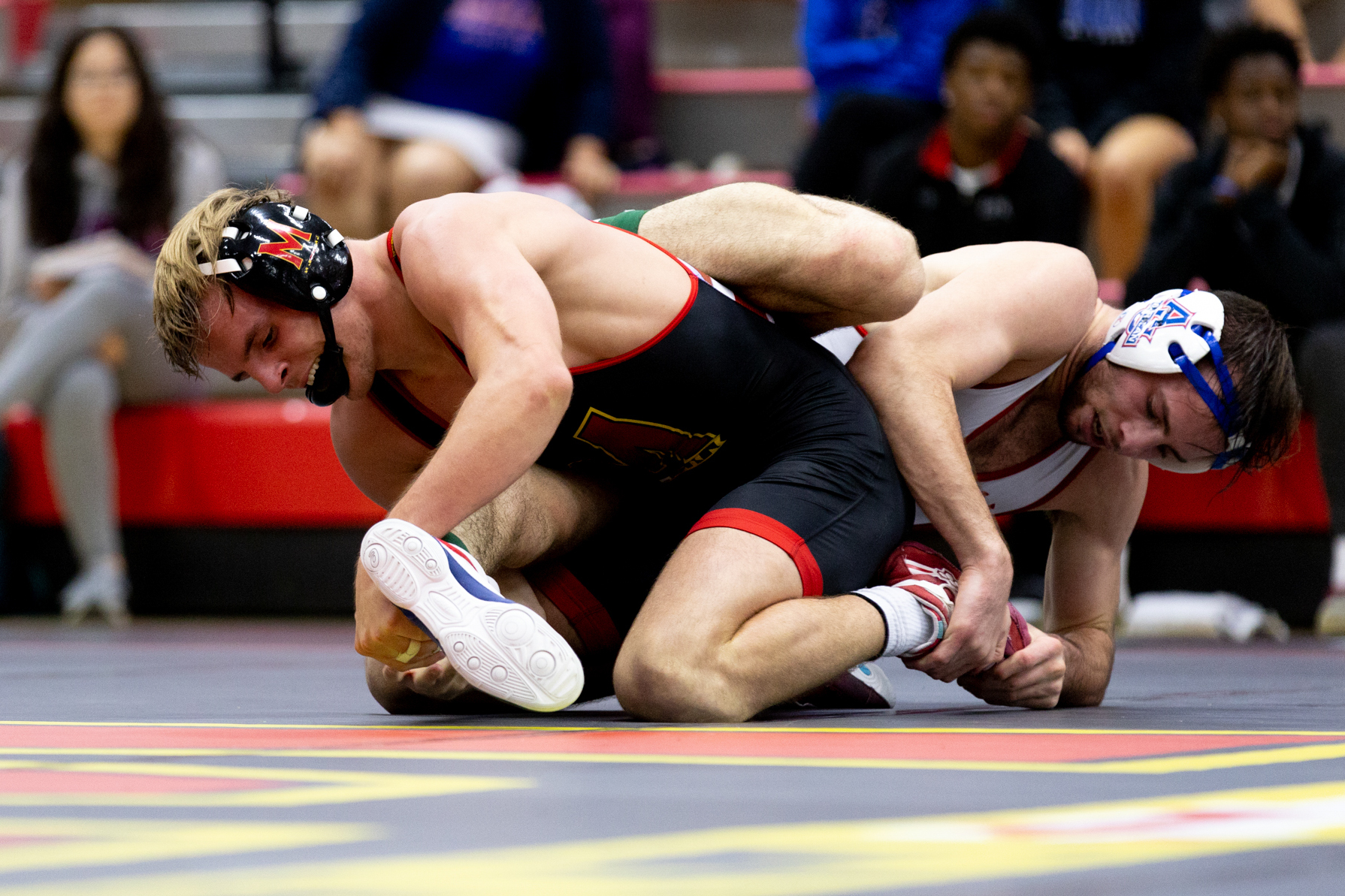 Jaxon Smith wrestled a combined five minutes and 53 seconds in two bouts. That was all it took to advance to the 197-pound final at the Tiger Style Invite.

A step up in competition from Maryland wrestling’s season-opening quad-meet a weekend ago, multiple Terps shined against nationally ranked wrestlers as Smith, Kal Miller and Michael North made it to the finals in their respective weight classes.

No. 25 Smith’s first pin, just two minutes and 32 seconds into the first period, was at the expense of Little Rock’s Matthew Weinert. With Weinert on his stomach, Smith seamlessly flipped him onto his backside, leaving Weinert helpless as Smith collected his first pin of the season.

He didn’t have to wait long for his second.

Smith held a 2-1 lead after a first period takedown against No. 13 Zac Braunagel of Illinois. Braunagel would score an escape early in the second period to tie things at 2-2, but the bout ended quickly after that.

From a neutral position, Smith aggressively went at the legs of Braunagel. Getting good position, Smith drove Braunagel up and down to the mat, securing his second pin in as many bouts. This pin advanced Smith to the 197-pound final against Cal Poly’s No. 5 Bernie Truax.

Tied 4-4 late in the third period after trading escapes and takedowns, a single leg takedown by Truax was the difference as the Cal Poly senior ended Smith’s title hopes.

North’s route to the final was a little longer and more strenuous than Smith’s.

North had complete control throughout the entire three periods of his first bout against Illinois’ Anthony Federico. Leading 8-2 after two periods, North was able to score a third period takedown and earned a 11-2 major decision to advance to the semifinals.

Going into the semifinals, North faced Cal Poly’s No. 27 Luka Wick. North didn’t score any points in the second period and entered the third period behind 4-2, but finally took control and was able to ride the back of Wick to flip the riding time, and the bout itself, in his favor.

He accumulated over a minute of riding time to earn him a riding time point that gave him the win, advancing to the 157-pound finals by a 6-5 decision.

North entered the third period of his final trailing 3-1 to Missouri’s No. 16 Jarrett Jacques. With a minute to go, Jacques was able to dive at the feet of North, earning a vital takedown to defeat North 6-2.

Kal Miller’s journey to the final was short but dominant.

His first bout of the day came in the semifinals. Continuing his dominance from his 3-0 start in Maryland’s first weekend of competition, Miller was superior against Missouri’s Korban Shepherd.

Miller used a second period escape and takedown to jump out to a 3-0 lead, and calmly beat Shepherd by a 4-0 decision to advance to the 141-pound final against Little Rock’s Brennan Van Hoecke.

Van Hoecke took a 1-0 lead into the third period, but Kal Miller answered immediately with an escape to tie it at 1-1. Kal Miller then scored a takedown with 10 seconds left, giving him the crucial two points to win the 141-pound final by a 3-1 decision.

Other results for the Terps saw Ethen Miller climb out of the consolation bracket after a loss to No. 3-ranked Missouri senior Brock Mauller to a third place finish in the 149-pound bracket.

He was dominant in his first two bouts of the day, winning by a tech fall and a major decision. But trouble struck against Mauller.

Falling into the third place bout, Ethen Miller closed out his day by taking down Illinois’ Kevon Davenport. He scored a big second period takedown and got an escape to win third by a 3-2 decision.

“[Ethan Miller’s] a nutty dude,” Clemsen said before the invite. “And he wrestles like it and I love that physicality.”

Lucas Cordio also avenged a loss from his first bout to finish fifth in the 165-pound weight class.

He had to battle back all day long after dropping his opening bout. Cordio won two of his next three bouts, including one against fellow Terp John Martin Best, to set himself up for a fifth place bout. He solidified fifth place with a tech fall victory.