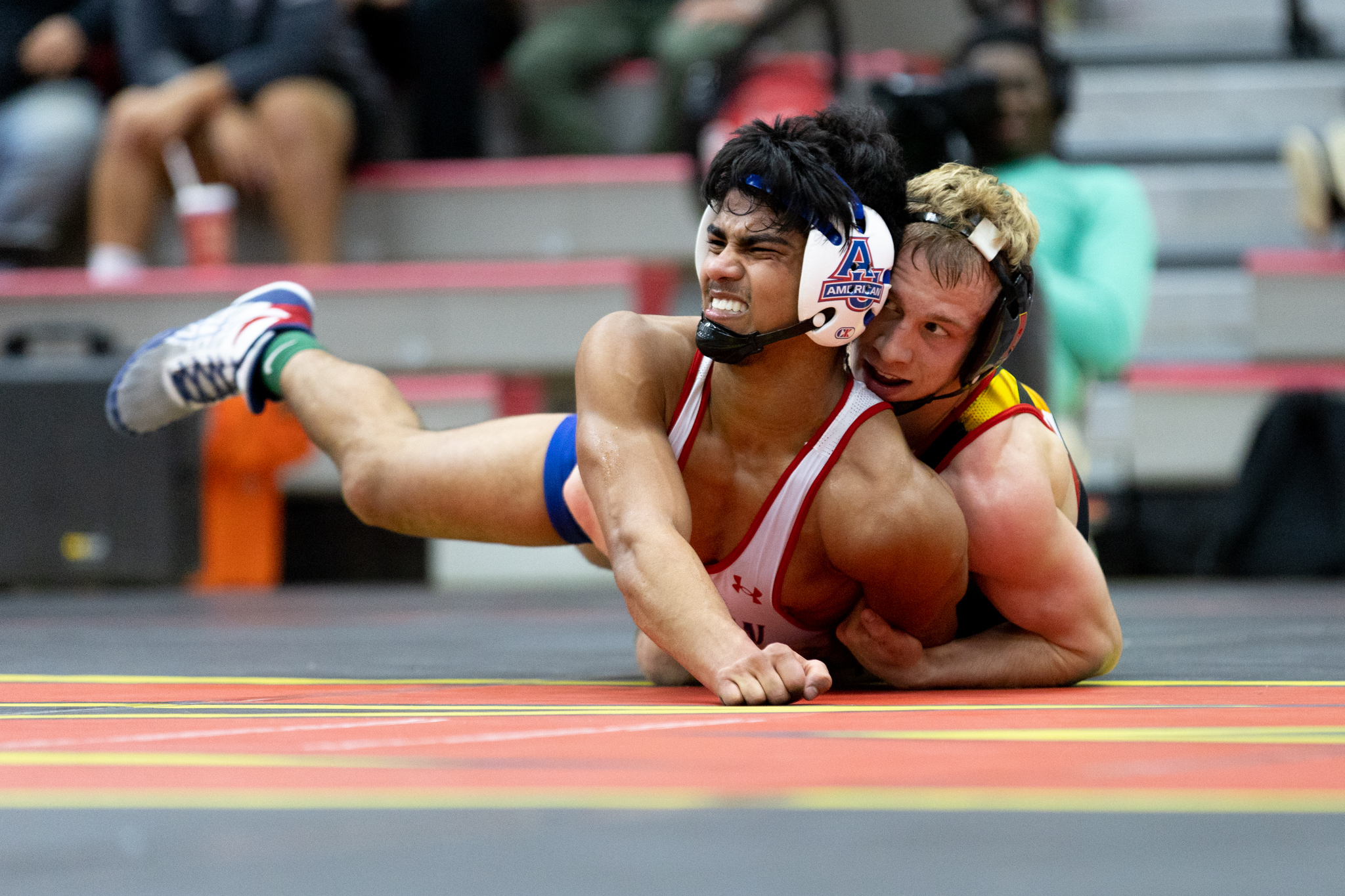 Braxton Brown took the mat in the opening 125-pound bout against Bloomsburg looking to give the Terps an early lead that would help Maryland wrestling secure its first win of the season.

The last time Maryland held a lead in a dual-meet after the 125-pound bout was on Feb. 20, 2020, against George Mason. Brandon Cray scored a pin in the opening period that night, and the Terps have now gone two full seasons without a win in that weight class since.

But the No. 29 ranked redshirt freshman Brown erased two full seasons worth of Maryland losses by winning three of his bouts against Bloomsburg, Duke and American.

“That’s kind of what I was recruited here for,” Brown said.

Brown started his season off in quick fashion, pinning Bronson Garber of Bloomsburg in less than two minutes. His quick pin gave the Terps an early 6-0 lead and helped Maryland cruise to a 37-6 victory, the first of three sweeps to open the 2022 season for Alex Clemsen’s squad.

“To have a guy come out and wrestle aggressive … it just sets the tone for the entire lineup,” Clemsen said.

His dominance didn’t stop there.

In Maryland’s second dual meet against Duke, Brown faced off against Logan Agin, who defeated Zach Spence of Maryland by fall dual meet a season ago.

But the outcome for Agin this time was different as Brown won by major decision 11-2, and again put the Terps in position early in the dual meet to grab a win.

This bout took a little longer than his first of the day, but Brown came out strong. Brown earned a takedown in the first period, and took a 3-0 lead in the bout to the third period.

Starting the third period in a neutral position, Brown was able to spin Agin to the mat for another takedown. Brown then flipped Agin onto his back, earning four near fall points to push his lead to 9-0. Brown’s second win of the day would help Maryland pitch a shutout against Duke, 37-0.

“He’s the ignition button,” Clemsen said. “We haven’t had that since I got here, and we’ve been waiting to have him in the lineup.”

Brown’s third and final bout of the day against Raymond Lopez of American was the tightest he would wrestle all day.

Brown fell behind after the first period, but answered quickly in the second period to tie the bout as the two wrestlers headed into the final period. Just like in the bout against Agin, the third period was where Brown took over.

“When you start hard, I guess, it just pushes everybody else to give their best and do the best,” Brown said. “It’s pretty important … it’s kind of like starting a car. If you don’t start fast and hard, everyone else is kind of lagged.”

Scoring an early escape in the third, Brown continued to go at Lopez. Later in the third period, Brown dove at Lopez’s feet and drove him up and down for a key takedown. The two points off the takedown would propel Brown to a 6-2 win by decision, and again lead the Terps to their third victory of the day, defeating American 29-10.

While it was Brown’s first time putting on the Maryland singlet to officially wrestle due to his redshirt season last year, Clemsen sees a regular starter in Brown.

“I think there’s some things that you can continue to work on and tighten up,” Clemsen said. “But I think for a long time, he’s going to hold down that spot for us and just get better and better.”