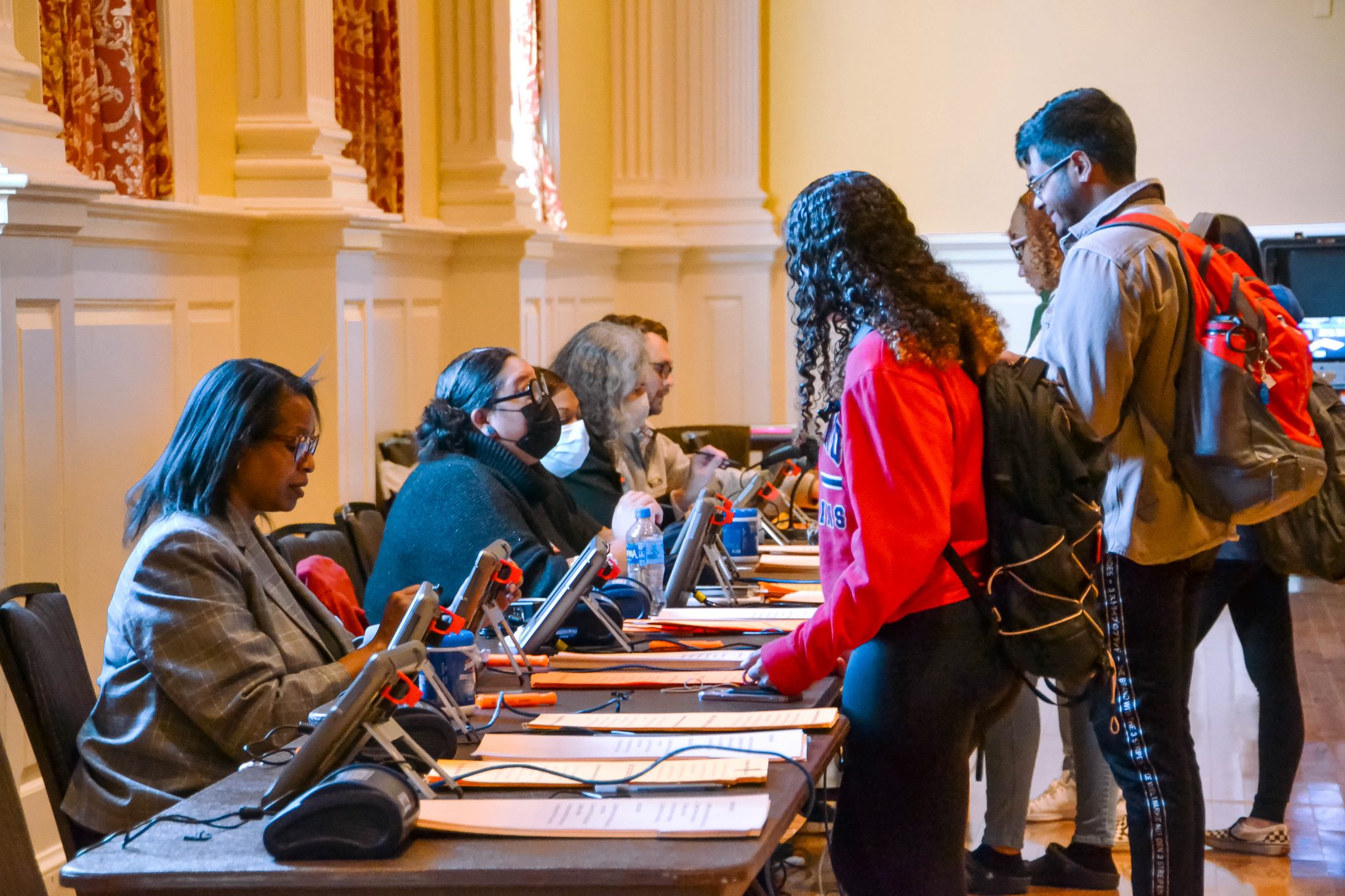 But in today’s contentious midterm elections, where key issues such as legalizing marijuana possession were on the ballot, Bumgardner showed up for his friends.

“I’m in a fairly comfortable position as far as my situation and background goes, but some of my other friends aren’t,” the sophomore computer science major said. “I wanted to support them.”

Bumgardner was among hundreds of voters who cast their ballots at Ritchie Coliseum and Stamp Student Union at the University of Maryland Tuesday. Students and College Park residents alike cast their ballots for the gubernatorial, Prince George’s County and federal midterm elections, as well as several referendum questions.

This was typical at this precinct because it is primarily made up of students, Heather Olsen, a chief election judge at Stamp, explained. She said the precinct would get busier in between classes and at the end of the school day.

Olsen has been serving as an election judge at Stamp since 2016.

“It’s very important that the [voting] process work properly. I’m a believer in democracy,” she said. “So I just wanted to contribute.”

Voting at Ritchie Coliseum got off to a rough start Tuesday, with polls only opening at 9 a.m. due to a delay with setting up electronic voting machines.

Janet Cabanagh, a College Park resident, voted at Ritchie and said it was the worst voting experience she and her husband have ever had. Cabanagh said she was told to go to an incorrect voting location and when she realized they had to go to Ritchie, the road was closed. She had to go through the nearby neighborhood to find parking and walk to the polling place in the dark.

“My husband’s handicapped, and so he’s had a hard time just walking to the front of the building to vote,” Cabanagh said.

“It’s sort of a lack of investment in our election infrastructure that we’re gonna need in a couple of years,” Lund said.

But others who voted on the campus said they appreciated the convenience.

Jessica Annoh, a freshman biology major, voted for the first time today at Stamp. She said she chose to vote on the campus rather than home because she doesn’t know how her parents feel about her voting.

“They’ve just never really talked about voting,” Annoh said. “They vote but not as much.”

Annoh said the poll workers at Stamp helped her with the process and made her feel comfortable.

In Maryland’s gubernatorial race, Annoh joined several other students and residents in voting for Wes Moore.

“I’m psyched to have the first African American governor in Maryland,” said Joanne Correira, a College Park resident who voted at Ritchie.

In the future, Gibb hopes there are less far-right candidates such as Cox on Maryland’s ballot.

“It’s kind of scary to have such extreme views going around in such a blue state,” she added.

Some students, such as freshman computer science major Gianfranco Secondi, said they voted simply to tag along with friends.

Others were more invested in specific issues. Reproductive rights took center stage at today’s polls, which came less than five months after the Supreme Court overturned Roe v. Wade and the constitutional right to abortion.

“I’m hoping that in these next four years, all of my elected officials will fight to put into law the fact that when people are not harming other people, they should be allowed to do their thing,” she said.

Some state lawmakers have pledged to continue expanding abortion access and codify abortion rights in the state’s constitution during the upcoming Maryland legislative session.

The opportunity to vote for marijuana legalization through a ballot referendum was also a main issue on voters’ minds.

“I have a chronic illness,” said Tasha Varner, a College Park resident. “Let it be so that anybody could get access, and a sick person does not have to go through the steps.”

“So many people have been incarcerated over … weed,” Anderson said. “I think it’s kind of ridiculous that it’s illegal in Maryland when it’s legal in several other states.”

Anderson said it is important for people to go vote so they can have a say in the government.

“It’s like the foundation of our country,” Anderson said. “Voting is by the people, for the people.”