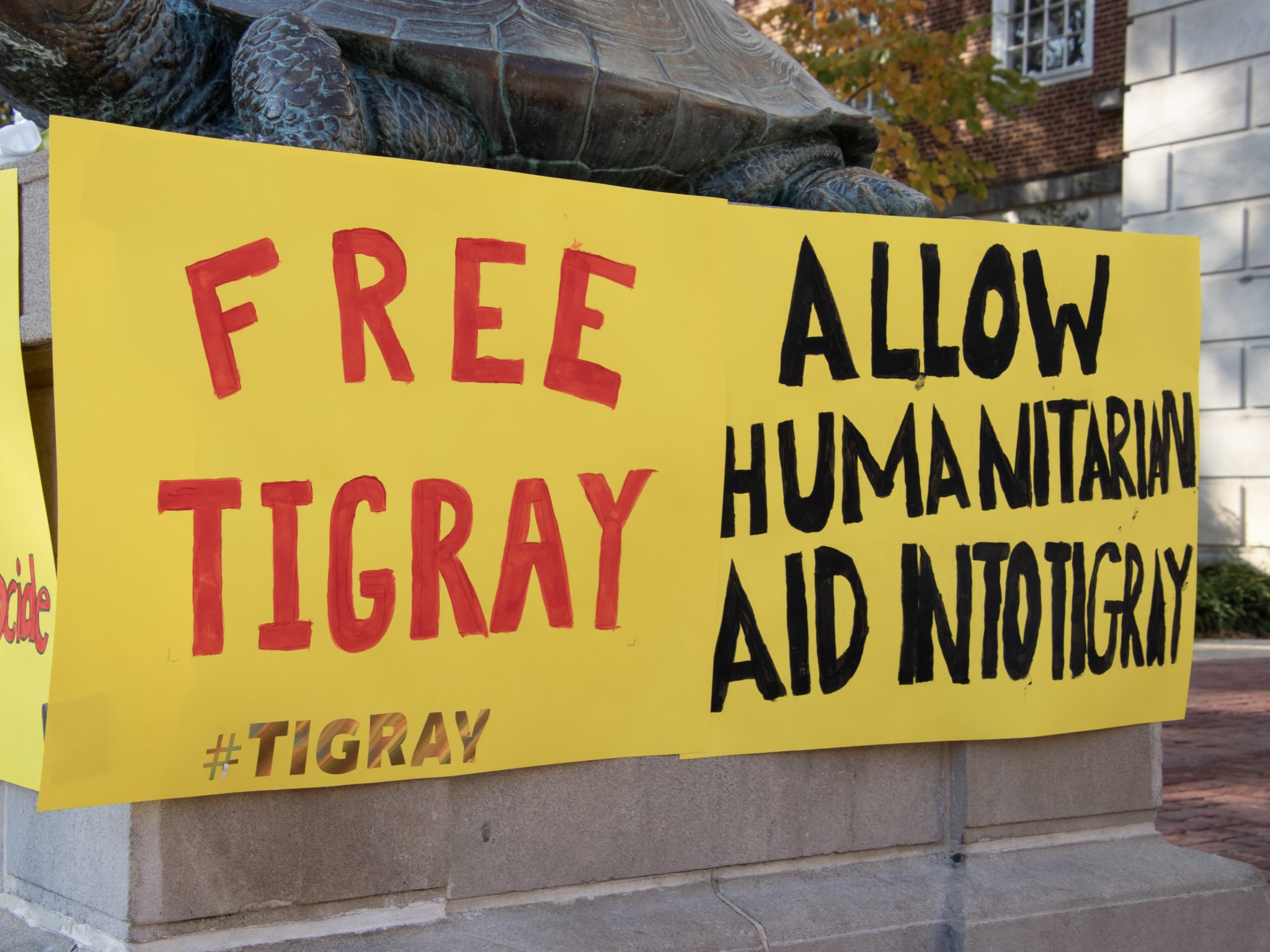 People for Tigray's signs hang on the Testudo statue outside of McKeldin Library on Nov. 3, 2022. (Daryl Perry/The Diamondback)

By Bridget Byrne
For The Diamondback

One day after an unexpected ceasefire was reached, People for Tigray, a new University of Maryland student organization, hung signs around the front stoop of McKeldin Library to raise awareness for the mass human rights abuses in the Tigray region of Ethiopia.

On Nov. 3, the usual crowds flowed around McKeldin Library, with some stopping to look over the tri-fold poster board with pictures of civilian victims of the war. Visitors who stopped to rub Testudo’s nose reached over signs that read: “Ethiopia and Eritrea are guilty of genocide.”

“We have no access to our families,” Ellen Teka, a sophomore government and politics major and member of People for Tigray, said.

The war in Tigray started two years ago. The fighting is between the Ethiopian federal government alongside its ally and neighbor, the State of Eritrea, and the Tigray People’s Liberation Front, an ethnic-nationalist paramilitary group and banned political party.

The United Nations Commission of Human Rights Experts on Ethiopia concluded in September 2022 that there are reasonable grounds to believe the federal government and its allies have committed crimes against humanity. International humanitarian groups have raised concerns since the outbreak of the war over widespread famine, sexual violence and extrajudicial killings.

“My baby brothers are there,” Betty Khsay, a sophomore psychology major and member of People for Tigray, said. “We don’t even know if he has medicine.”

Ari Mcintosh, a junior journalism major, said she stops at tables on McKeldin Mall all the time and shared she knew very little about what was going on in Ethiopia.

“I was curious,” Mcintosh said. “I knew that there was some stuff going on, but I didn’t know exactly what it was.”

After talking to the organizers, she decided she wanted to do anything she could to help the situation, including signing the petition.

Wednesday, a ceasefire was reached to allow food aid to reach those desperately in need, but the students of People for Tigray are skeptical.

“There was a ceasefire before, and the Prime Minister broke it by bombing Tigray,” Teka said. “So we’ll just wait and see.”

According to Teka, you won’t find People for Tigray on STAMP’s list of student organizations until next semester, but more than half a dozen members were at this event passing out flyers and patiently explaining the tragedies in Tigray to anyone who would listen.

The organization says its main goal is to inform.

“This is not the first time this has happened to Tigray,” said Khsay, referring to the long history of human rights abuses in Ethiopia. “Especially with the professors [and older generation], I know they all remember the 1980s famine in Ethiopia, but they don’t really know that was Tigray.”

People for Tigray hopes to spread awareness of Tigray’s suffering, culture and history so tragedy does not go unnoticed.