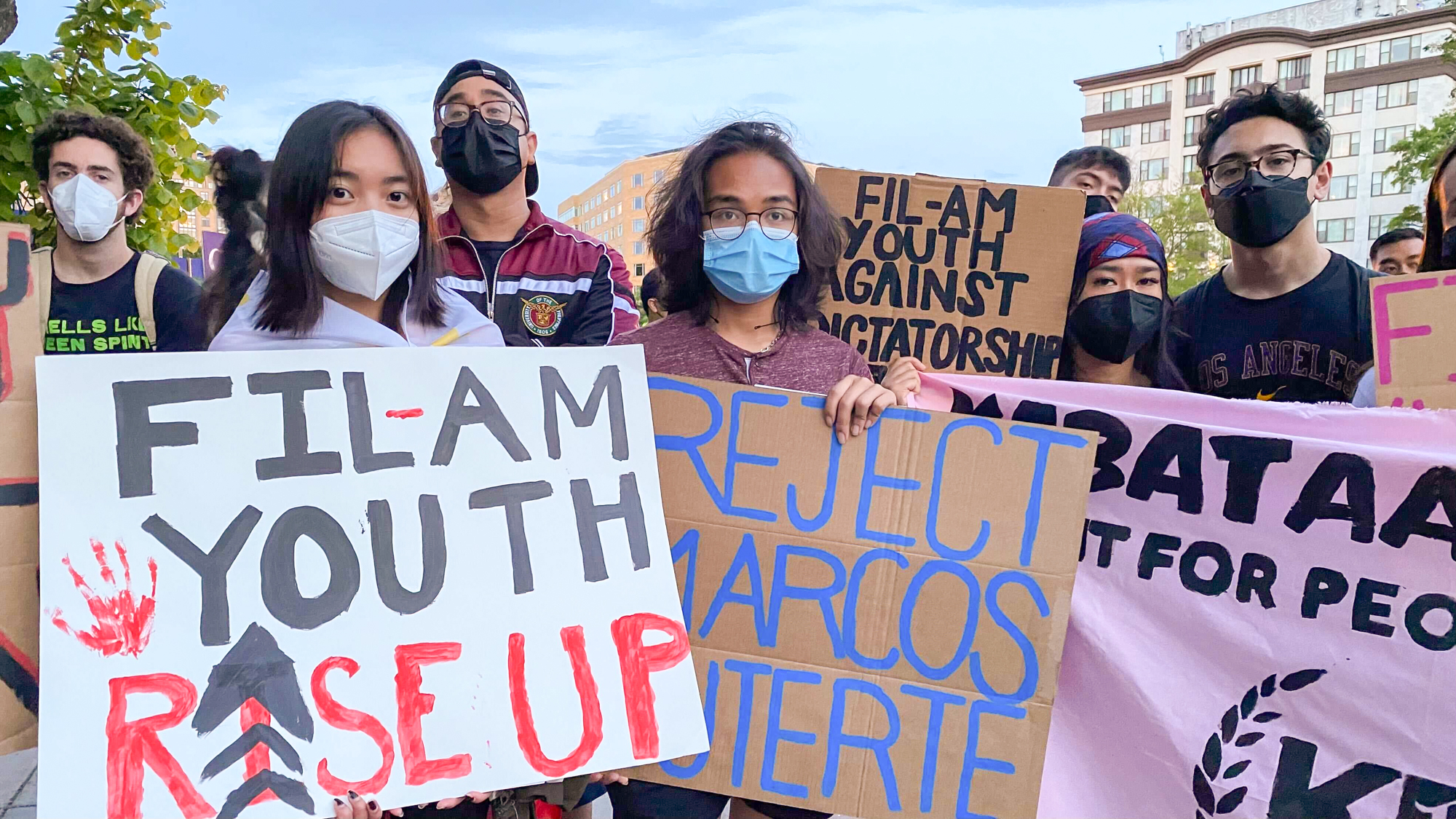 People gather in front of the Philippine Consulate in Washington, D.C., in protest of the recent 2022 Philippine election on May 13, 2022. (Nyrene Monforte/For The Diamondback)

By Nyrene Monforte
For The Diamondback

Chants reverberated alongside a beating drum in front of the Philippine Consulate in Washington, D.C., on May 13.

About 100 people gathered to protest the results of the 2022 Philippine election held May 9, in which Ferdinand “Bongbong” Marcos Jr. won the presidency by a landslide, according to ABS-CBN News. This election comes 36 years after the ousting of Marcos Jr.’s late father, a Philippine dictator who seized millions of dollars and imposed martial law for nine years.

Rally organizers such as Malaya Baltimore and 1SAMBAYAN, said the resurgence of these two political dynasties will fester more concerns of authoritarianism and human rights violations in the Philippines. Protesters also said it was an unfair election due to disinformation online and accounts of voter disenfranchisement.

Rio Gutierrez, a sophomore enrolled in letters and sciences, found the election results paralyzing. As a Filipino immigrant and a recently naturalized U.S. citizen, she was not able to participate in this year’s election.

“I thought about how things are going to be the same again, with [President Rodrigo] Duterte and what he did,” Gutierrez said. “People are gonna get hurt again.”

Gutierrez attended the rally as a way to take action. They considered the rally an uplifting environment and resonated with speeches that stressed the importance of organizing.

“A lot of the time, it feels like you’re alone, especially if you’re an immigrant in a PWI,” Gutierrez said. “But the thing is, you just have to find your community.”

Andrea Cagurangan, the incoming president of the University of Maryland’s Filipino Cultural Association, attended the rally as a way to strengthen her Filipino American identity.

The junior marketing and management major was joined by a handful of other Filipino Cultural Association members.

“We are a cultural organization, and this is a part of our culture. It’s a part of our political identity,” Cagurangan said. “It’s important for us to use what resources we have and the energy we have to make a difference.”

Filipino American youth activism group Kabataan Alliance, which the association is an affiliate member of, invited this university’s students to the rally, according to Cagurangan.

Cagurangan said she hopes to continue the energy she found in the rally with more educational programs about Filipino history and politics on campus.

In April, the Filipino Cultural Association co-sponsored a teach-in led by this university’s Asian American Student Union and Kabataan Alliance on the Philippine Human Rights Act.

“[I want to give FCA members] the knowledge first and help guide them to make the actions and the decisions they want,” Cagurangan said.

Reno delivered a speech on behalf of Anti-Imperialist Action, a student group organizing against military contractors at their university, while Mutch represented the Maryland Committee for Human Rights in the Philippines.

As non-Filipinos, Reno and Mutch said it was important to show solidarity for the struggle for self-determination in the Philippines.

Reno noted how quickly China and the United States recognized Marcos Jr.’s win, which they said speaks to the countries’ economic interests in the Philippines.

Mutch added that the Philippines also shares a long-standing colonial history with the United States.

“Their government is very much set up to resemble ours. English is an official language. A lot of the business depends on U.S. business interests,” Mutch said. “The reason that non-Filipinos should show up is that we have that shared connection.”

Gutierrez, as an American citizen, echoed a similar sentiment.

“Even though we don’t really have any family left in the Philippines, we’re still Filipino. We live[d] there and we owe it to that land, to those people that we met, that we were friends with,” Gutierrez said. “I’m fighting your fight, too.”