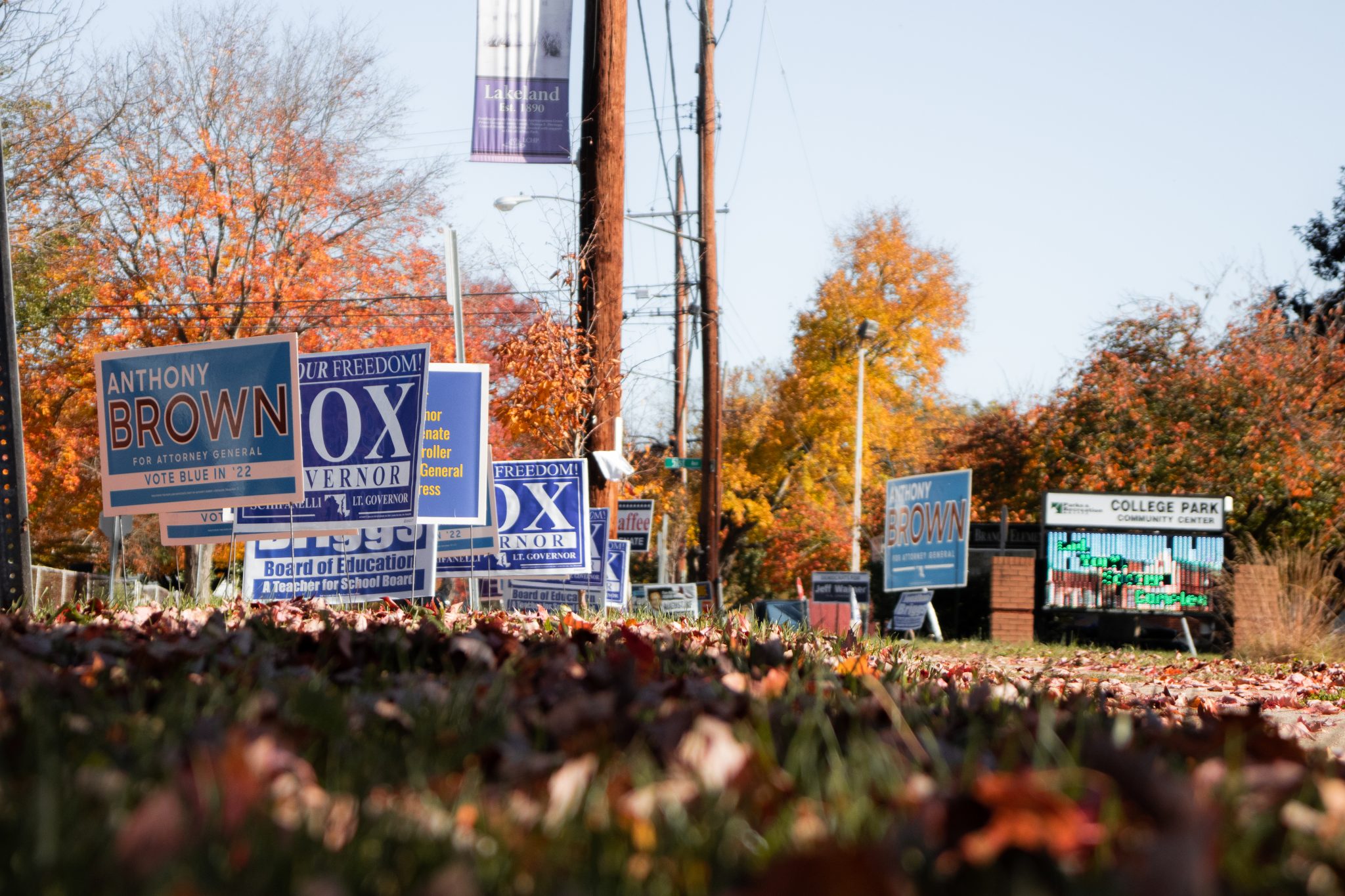 Voting signs are posted up outside the College Park Community Center on Oct. 29, 2022. (Neelay Sachdeva/The Diamondback)

TerpsVote and the University of Maryland’s Department of Transportation offered vans Friday and Saturday that took voters to the closest early voting location for the upcoming midterm election — but the turnout was low.

The vans drove from Stamp Student Union to the College Park Community Center every 15 minutes.

“I don’t think I could have gotten to the polls if I didn’t have someone to drive me,” they said.

Cusack was one of about five students who used TerpsVote’s transportation, according to one of the drivers.

Andy Espinal, a sophomore information science major who works for Shuttle-UM,  drove one of the vans to the polls Saturday. Espinal said he wishes more people would take advantage of services such as the voting vans.

“It’s very important that people get their votes … it’s also a duty as well,” Espinal said.

Students can choose between their college address or their home address for their voter registration. Many students keep their voter registration in their hometowns and don’t switch it based on their college address, which could be a reason for only a few students using the van, according to Naomi Cohen, the social action and democratic engagement coordinator in the leadership and community service-learning office at Stamp.

Leo Osei, a sophomore psychology major, votes in his hometown of Gaithersburg. Osei said he didn’t know he could change his voter registration to his college address but said he likely wouldn’t because it would not make a significant political difference. “It’s going to be blue no matter what. [Prince George’s] County versus Montgomery County, they’re both very liberal … so it wouldn’t even matter either way,” Osei said.

Cohen said there are many reasons why college students don’t switch their registration.

“They might not consider Maryland to be their true home and for a lot of people, they might be more passionate about issues that are on the ballot in their home state,” Cohen said.

Cohen said she and TerpsVote are happy whenever students are voting at all, regardless of what jurisdiction they’re registered in.

Students who are opting to vote by mail and need to print mail-in ballots and proof of residency can do so for free at McKeldin Library or Stamp’s leadership and community service-learning office, according to Cohen.

For on-campus students who want to change their voter registration based on their campus address, they can access their proof of residency on their StarRez portal. Maryland voters change their registration or register to vote on or before Election Day Nov. 8.

“Voting in elections is really important … It’s one of the most important things that you can do, to have your voice be heard,” Cohen said.