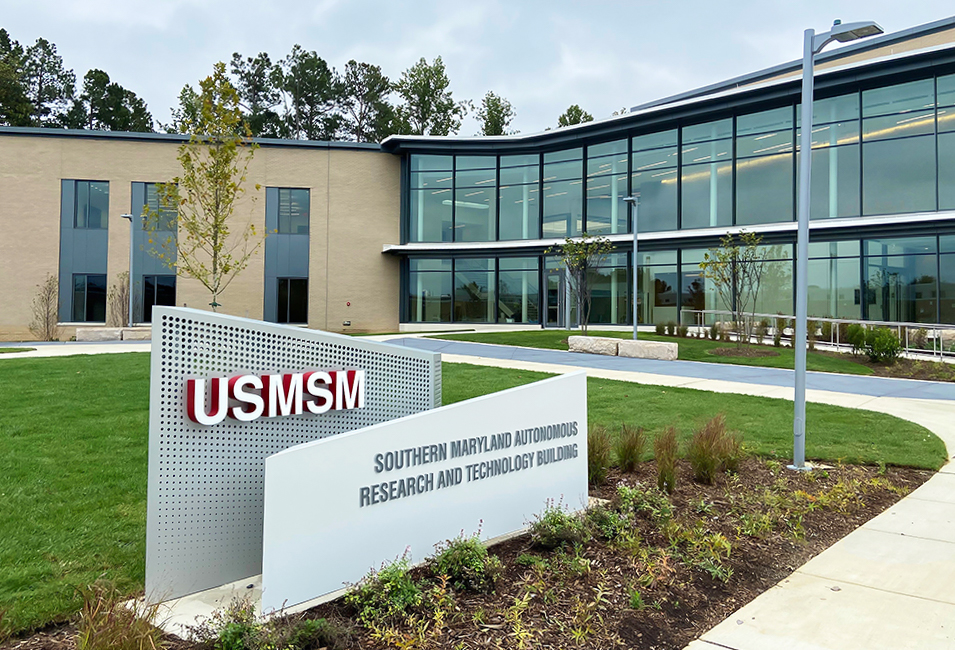 (Photo via A. James Clark School of Engineering website)

Matthew Scassero, the outreach and operations director at the engineering school’s Southern Maryland extension, has been with the Maryland Autonomous Technologies Research Innovation and eXploration lab every step of the way. Hardly 10 years ago, University of Maryland presence in Southern Maryland was minimal but starting with a drone site taken in by the university in 2014, this started to change.

The University System of Maryland at Southern Maryland was founded in 2019, and plans were drawn up for state of the art engineering facilities that would bring together education, research and community outreach. To Scassero, the MATRIX lab is the rewarding culmination of these many pieces, and the lab just celebrated its first anniversary on Oct. 15.

“The MATRIX lab is looking to build on [this university’s capabilities] to help the university and the state take on that leadership role in autonomy,” Scassero said.

It took several months for the MATRIX lab to get up and running – the WiFi was turned on in February, Scassero said – but in its eight months of operation, the laboratory has housed several programs and research projects.

Wei-Kuo Yen, a postdoctoral associate at the Maryland Robotics Center, is using the hydrology lab and nearly 18,000 gallon water tunnel, the second largest in Maryland, for his research on schools of robotic fish.

Fish use sensory information from the eyes and lateral line, which is a network of neurons on the surface of fish bodies to sense water movement and the motion of nearby fish according to Yen. This helps the fish synchronize with each other.

Yen hopes to accomplish this synchronization with robotic fish using pressure sensors and cameras. The large size of the water tunnel in the MATRIX facility will allow Yen to do experiments with larger fish and wider separation.

“Because USMSM has a huge water tunnel … we can put our robotic platform inside the water tunnel to do the research we want,” Yen said.

This research is funded by the Multidisciplinary University Research Initiative until 2023. While the work is preliminary, it may eventually be used for surveillance, according to Yen.

MATRIX also hosts multiple companies working in air, ground and water autonomous vehicles. Sierra Nevada Corp. and Kutta Technologies Inc. recently used the shielded chamber in the MATRIX lab’s open air facility, which blocks electromagnetic waves, to test how well drones could maneuver using sensors and autopilot. This was set up within two weeks, which is much faster than a government facility, Scassero said.

“Flexibility is really the name of the game in our whole building, both in education and research,” Scassero said.

That flexibility allows the lab to help customers and students complete their goals quickly, Scassero said.

The MATRIX lab was also the location of a Navy demonstration for long distance communication by autonomous aircraft and potentially other autonomous vehicles. This technology is “critical and tenuous,” according to Scassero, so the demonstration’s success was a big step for MATRIX’s capabilities.

Alongside research, another goal of the MATRIX lab is University System of Maryland at Southern Maryland community outreach. According to Scassero, the National Society of Black Engineers Jr. Leap Forward program meets monthly at the MATRIX lab to expose local K-12 students and their families to the prospect of working in STEM.

The MATRIX lab space also hosted the first National Science Foundation STEM summer camp in southern Maryland in August, which introduced local high school students to topics in engineering. For a week, the students were given the opportunity to model and 3D print designs and program Arduinos.

Ryan Gerbes, a senior mechanical engineering major, was one of three interns that planned the camp with Danilo Romero, director of the electrical engineering program at University of Maryland at Southern Maryland. Gerbes said the MATRIX lab was chosen because of the variety of facilities available.

“[MATRIX] has brand new state of the art technologies for manufacturing, fabricating, building and testing all in one center,” Gerbes said. “The objective is to make … a one stop shop.”

Gerbes used the 3D printing lab at MATRIX to teach the students modeling and 3D printing.

“I think there’s a novelty factor from [3D printing],” Gerbes said. “[The students] were able to design something, plan it out … print it out and hold a physical object in their hand.”

Natalie Leveque, a junior computer engineering major and another intern at the STEM camp, taught the students programming and robotics.

Leveque’s students programmed buzzers to play songs and apps to order pizza, embracing what Leveque described as “the creative side of the tech.”

“Everyone was really excited just to see the way their code interacted with the circuit they built,” Leveque said. “Seeing the kids think about what they could do on their own was really cool.”

Gerbes said the MATRIX lab is a great space to introduce students to the technologies the university has to offer.

“It’s like a chance to crack open a box of something new … these students, it was their first time seeing something like this and realizing, ‘Wow, I could go to school here and use these technologies all the time,’” Gerbes said.

CLARIFICATION: Ryan Gerbes views the MATRIX lab as a great place to introduce students to the university’s technologies, not just the lab’s.
CORRECTION: A previous version of this story misstated the name of University System of Maryland at Southern Maryland. It also misquoted Matthew Scassero as saying the university and state’s “leadership role and autonomy.” Scassero said “leadership role in autonomy.” It also misstated the MATRIX lab hosted the first ever National Science Foundation STEM summer camp. It is the first in southern Maryland to host the camp. This story has been updated.