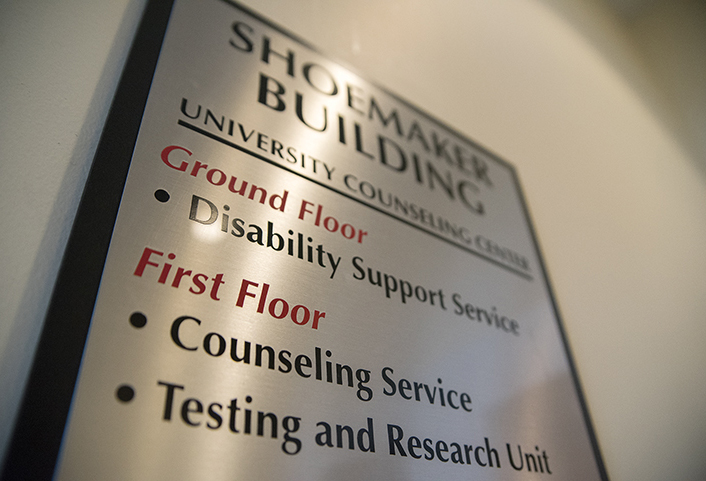 A sign for the university's counseling center located inside the Shoemaker building. (Stephanie Natoli/The Diamondback)

By Samuel Jane
For The Diamondback

The University of Maryland Counseling Center hosted an event covering imposter syndrome and its effects Oct. 20.

Alex Agiliga, a staff counselor with the Counseling Center, defined imposter syndrome, or imposter phenomenon, as “an experience or sense of being unqualified or undeserving of success and achievements despite our skills, talents and accomplishments.”

About 70 percent of people will experience the imposter phenomenon at least once in their lifetime, according to Agiliga. For some students, including Giannina Guzman Caloca, imposter syndrome is something they have struggled with throughout their college career.

Guzman Caloca, an astronomy doctoral student, said the phenomenon has plagued her since she was an undergraduate.

“At the level of my career that I’m at, I should feel like I deserve to be where I am,” Guzman Caloca said. “I’ve gone through enough closed doors that opened up for me and they couldn’t all have been luck, but I still feel that way.”

The workshop aimed to help students better understand the feelings of imposter phenomenon, what symptoms might be connected and where those thoughts originate.

Calvin Osinga, an astronomy graduate student, said the workshop helped him recognize symptoms of the phenomenon in himself.

“I just thought that I was a perfectionist,” he said. “I realized, oh, that actually makes sense why … the feeling of wanting to present only my best work would be connected to imposter syndrome.”

Agilia stressed the importance of terminology, choosing to use imposter phenomenon instead of the more popular imposter syndrome.

“I want to focus on imposter phenomenon,” Agiliga said. “Syndrome has a sense of being a clinical or medical diagnosis.”

As a woman in STEM, Guzman Caloca has experience dealing with feeling like she does not belong.

“We don’t see as much representation of ourselves [in STEM],” she said. “When we don’t see ourselves as much in a space, obviously our subconscious is going to question do I even belong here?”

While some early research on imposter phenomenon focused only on women in STEM fields, Agiliga emphasized anyone can experience it.

“Imposter phenomenon is commonly experienced by people across gender, race, age and occupation,” she said. “We all have the potential to be impacted by it.”

Osinga spoke about how his circumstances contributed to his experience with the imposter phenomenon.

“I had a lot of privileges when it came to a family that really pushed me academically. The only reason I was able to keep up was because of the fact that I had a head start,” Osinga said.

For Maria Jimenez, a sophomore finance major who switched from studying engineering, the phenomenon was triggered by feeling she lacked a head start.

“A lot of engineering students, they have family or parents who are engineers. They already knew stuff, but I didn’t know what I was getting myself into,” she said. “I felt like I was so behind even before school had started.”

Osinga said recognizing imposter phenomenon is the first step in overcoming it, but people need support from mentors and professors to overcome it.

“I feel like there’s an aspect to the mentor, the faculty and the people in positions of power who can be critical in a way that worsens it,” Osinga said.