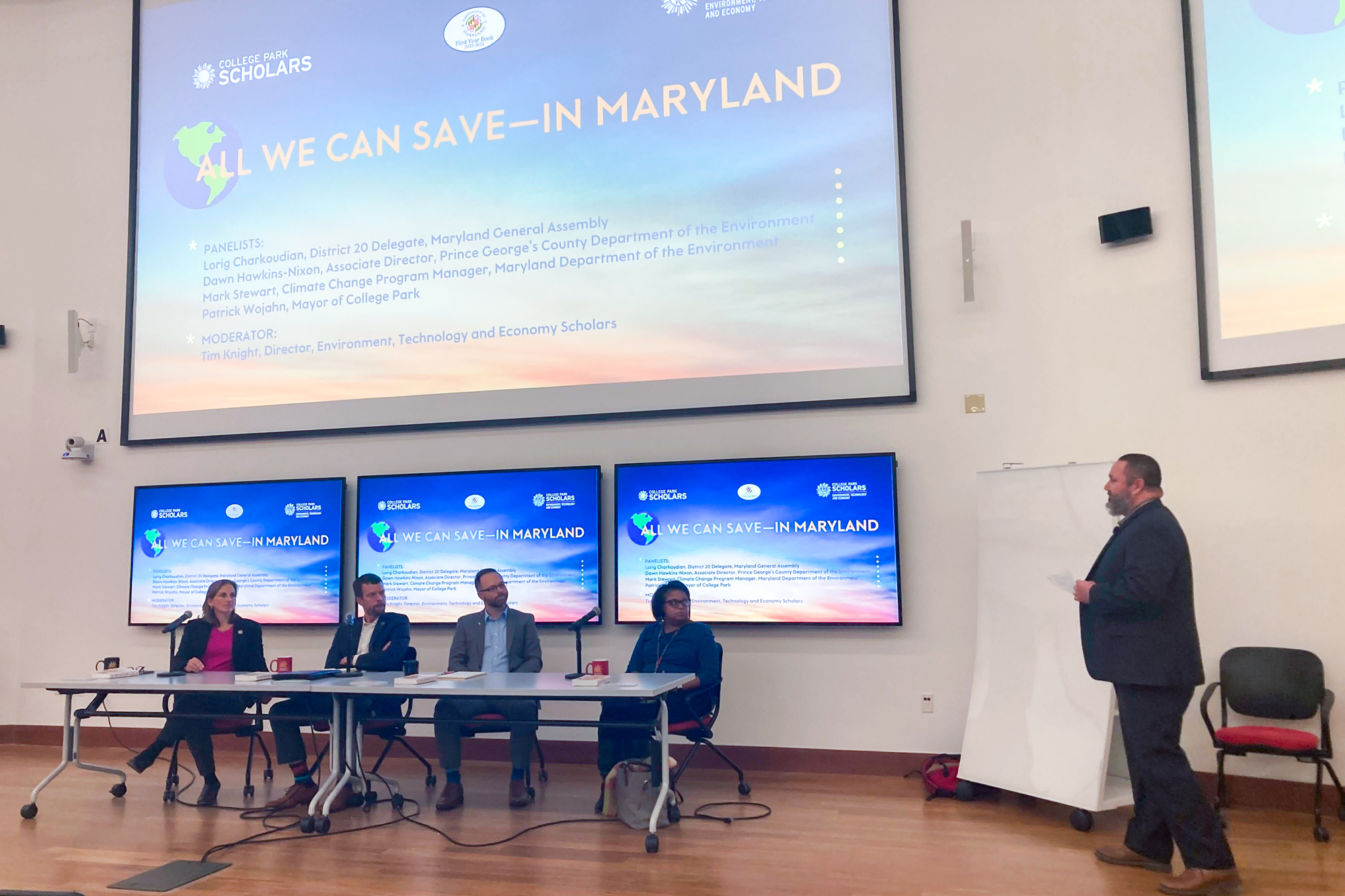 Lorig Charkoudian, Patrick Wojahn, Mark Stewart, Dawn Hawkins-Nixon, and Tim Knight (left to right) speak as panelists at an All We Can Save - In Maryland climate change forum on Oct. 19, 2022. (Rachel McCrea/For The Diamondback)

A panel of four local leaders gathered at the University of Maryland Wednesday to discuss local climate policy and share ways students can take action on environmental issues.

The discussion began with an apology.

“On behalf of my generation to your generation, I need to apologize for the past that you’re inheriting,” panelist Lorig Charkoudian, a District 20 state delegate, said upon introducing herself. “We have made an absolute mess of this.”

The rest of the time was taken up with action. Panelists discussed current policies from local and state governments to combat climate change, harmful emissions and environmental racism.

Governments in Maryland are setting ambitious goals at the state and local levels to combat greenhouse gas emissions. A new state law aims to cut emissions to 60 percent below 2006 levels by 2031. Mark Stewart, the climate change program manager for Maryland’s environment department, called the law “the most aggressive climate rule of any state in the country.”

In College Park, the goal is to reduce emissions by half by 2030 and 80 percent by 2050. 2050 is the deadline set by the Intergovernmental Panel on Climate Change for the world to reach net zero carbon dioxide emissions and avoid catastrophic global warming.

The panelists emphasized the importance of replacing cars and heating systems with electric options to meet their goals. Stewart said “electrification is key.”

“We need to move in many different ways at once. We need to address greenhouse gas emissions in every single sector,” College Park Mayor Patrick Wojahn said.

Panelists also spoke on the impacts of environmental racism and their efforts to implement environmental justice in their legislation.

“We would not have a climate crisis if it weren’t for racism,” Charkoudian said.

She was referring to the U.S.’ history of extracting fossil fuels from Indigenous lands and burning them in predominantly Black and brown communities. She said there is a need in new climate legislation to prioritize the communities that have been hurt the most by climate change.

“How do we skew the distribution so that as we’re fixing and addressing greenhouse gas emissions, we’re prioritizing the investments that also help with environmental health issues in the communities that have been most victimized?” she said.

Wojahn stressed the importance of green infrastructure in low-income communities and communities of color, many of which have been negatively impacted by highways being built through neighborhoods. Adding more green spaces and areas for walking and biking has the potential to connect communities instead of dividing them, he said.

The panel wrapped up with a discussion about how students can take action on climate issues.

“It was very interesting to hear from people in the local government who actually care about College Park, and Maryland, and what we can do specifically to improve our community,” sophomore environmental science and policy and supply chain management major Quinn Lugenbeel said.

Panelists suggested oft-quoted ways to help, such as cutting meat out of your diet, contacting your representatives and getting involved with advocacy organizations. However, they also told students there are countless opportunities to make an entire career out of environmental work.

“Whatever your career will be, understand that climate action can be integrated into it in some way, shape or form,” Hawkins-Nixon said.

The panel was hosted by College Park Scholars as part of the sophomore curriculum involving 2022’s First Year Book, All We Can Save: Truth, Courage, and Solutions for the Climate Crisis. Tim Knight, the event moderator and the director of Environment, Technology and Economy Scholars, said he hopes the event will inspire his students to take action on important issues instead of being overwhelmed by them.

“Whatever it is that is important to them, I want them to feel like they have the ownership and the power to do something about it,” he said.