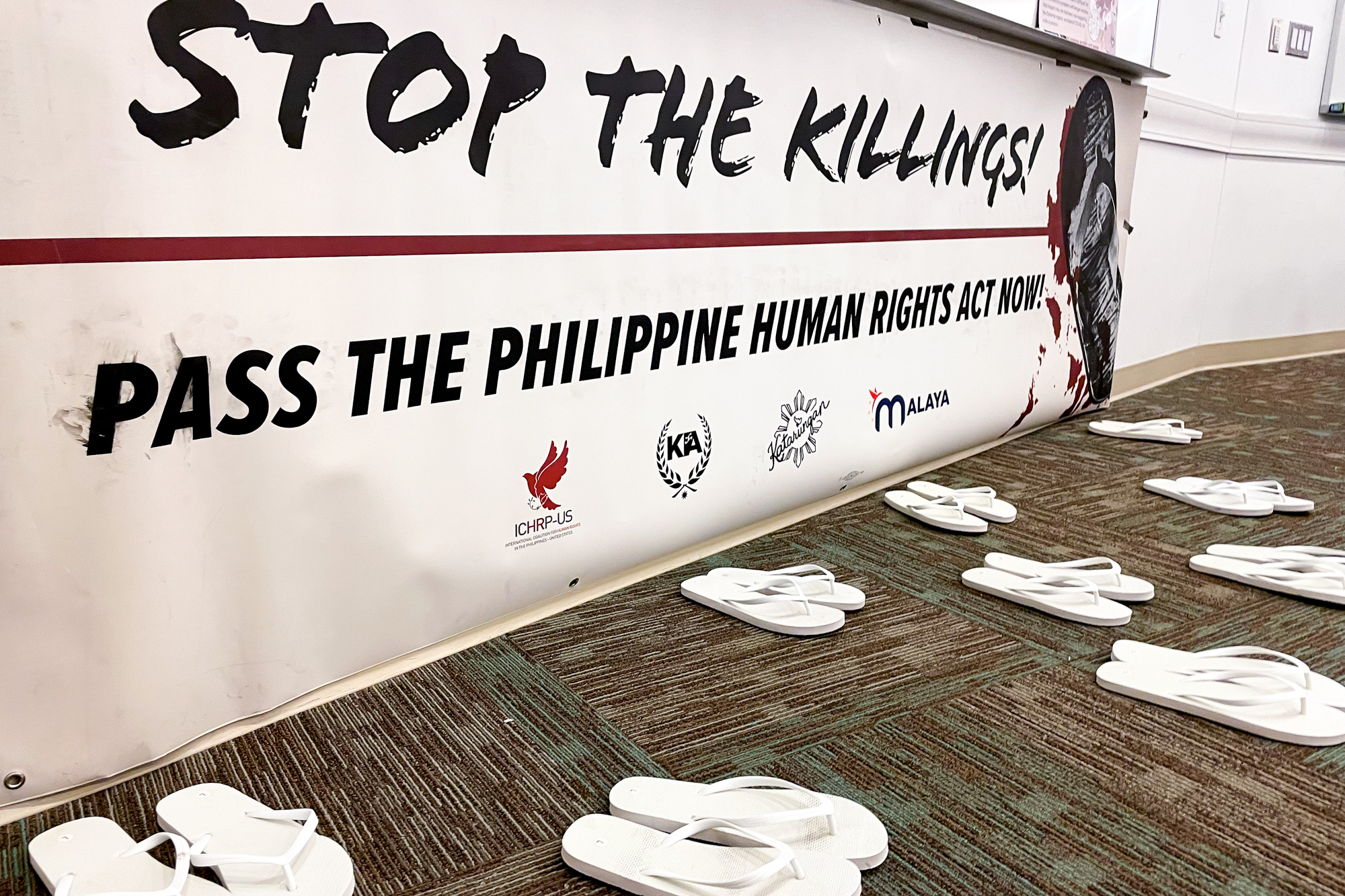 The University of Maryland's Filipino Cultural Association and the Asian American Studies program host an event to celebrate Filipino-American History Month with art activism and to mourn those lost to human rights abuses in the Philippines on Oct. 21, 2022. (Bridget Byrne/For The Diamondback)

By Bridget Byrne
For The Diamondback

The event was a collaboration between the university’s Filipino Cultural Association and the Asian American Studies program.

“Tonight’s action is an art activist demonstration as part of the legacy of putting our activism in art and how it constructs a transnational political participation through art,” Marjorie Antonio said, a recent graduate and founding director of the association’s FCArts who spoke at the event.

The talk was led by Antonio, Chrissi Fabro, a Filipino American youth activist, and Kai Kai Mascarenas, an activist and program coordinator for the university’s Asian American studies program.

This year marks the 50th anniversary of the establishment of martial law in the Philippines, when President Ferdinand Marcos Sr. started a 14-year period marked by human rights abuses targeting anyone who spoke out against his regime.

Marcos Sr.’s legacy looms large since his son, Ferdinand Marcos Jr., became president in June. Marcos Jr. has continued the brutal drug war that was started by the previous president, Rodrigo Duterte, that has claimed thousands of lives, largely without due process.

“As someone who grew up here, there’s a lot of knowledge that is just sort of hidden,” Eman Bautista, a sophomore computer science major, said. “I wish I knew, and it just makes me very angry.”

Speakers read the stories of victims of the drug war off placards, including the story of a 4-year-old girl who was shot and killed while police pursued her father and another of a 17-year-old boy whose last words included him pleading with police: “Please, I have an exam tomorrow.”

Last year, Mascarenas worked with the International Coalition for Human Rights in the Philippines to place 3,000 tsinelas, a common footwear in the Philippines, along the National Mall to represent more than 30,000 lives lost to government campaigns. The stunning visual was used to demand suspension of U.S. security assistance and for Congress to pass the Philippine Human Rights Act.

That action served as inspiration for the art created by students Friday night.

After the talk, spirits lifted as music played and speakers led workshops. With storytelling, theater and visual art, students experimented with how to express their anger and pride for their heritage.

The group broke out for workshops on different forms of art activism, including visual art, storytelling, and theater. Students answered the question: “What does art activism mean to you?”

“Since it is so broad, that means that different emotions and different feelings can be brought out or conveyed through different types of media, in different types of art,” said Bautista, who did the visual art workshop. “I was trying to focus on the pain and distress that comes with being a Filipino American.”

Students stayed past the end of the event, acting out tableaus to represent the tragedy, finding creative ways to tell the stories they had heard and creating art that expressed their anger and frustration.