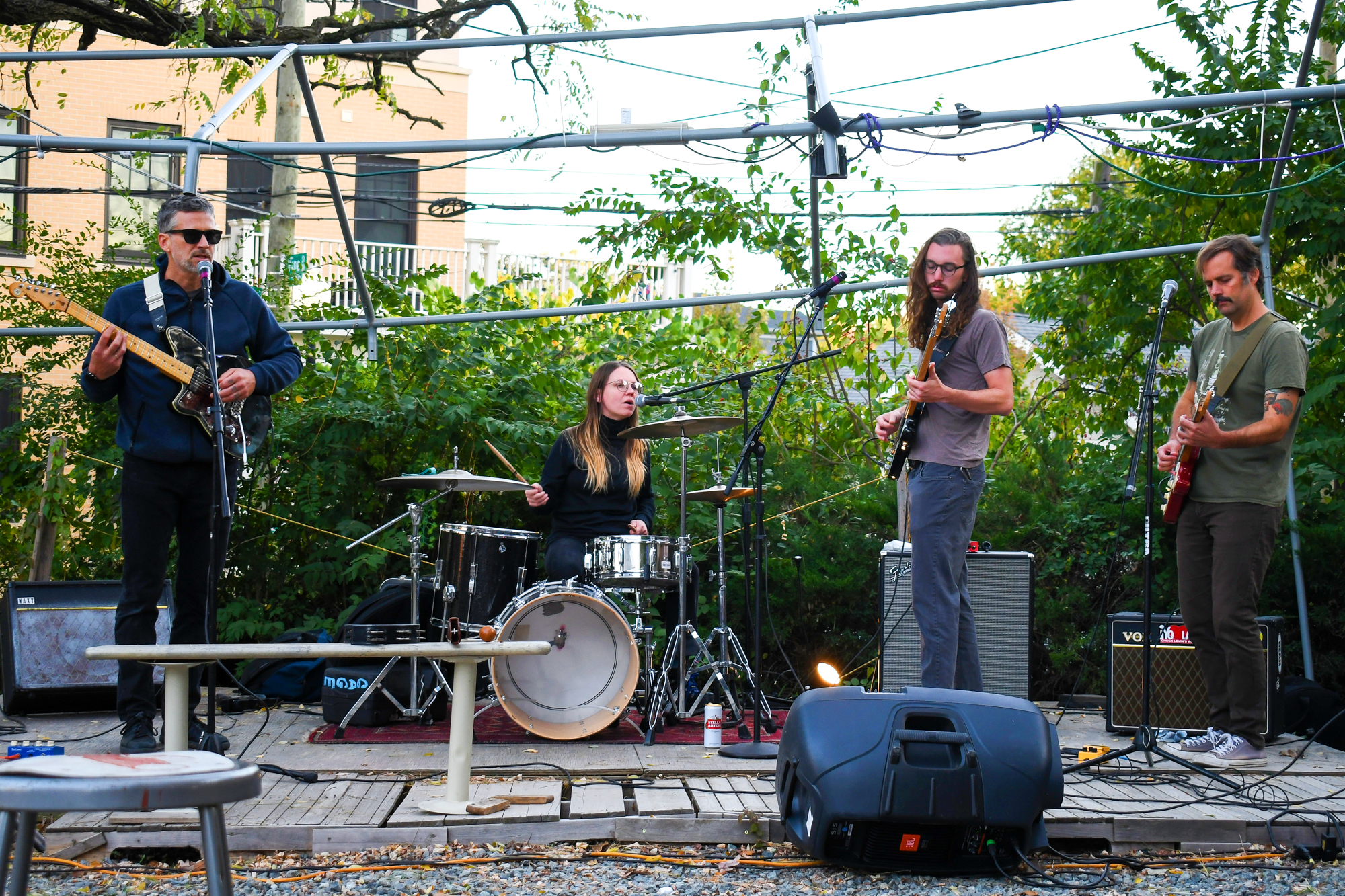 Orange and brown leaves fell from nearby trees and landed on the yard outside a little house venue called Rhizome DC in the Takoma neighborhood of Washington, D.C. There with their instruments was the band BRNDA, bringing their loud and upbeat sound to a small crowd who watched them closely.

At the end of playing their song “Mayhem Tom,” the crowd cheered. Then drummer Leah Gage grabbed a can nestled in a koozie decorated with a tuxedo and the words “Mr. Right.” Raising it, she addressed the audience.

“Everyone, take a sip of your beverage of choice,” Gage said.

After taking a sip, she banged her drumsticks together and the song “Beverage of Choice” began with an explosion of sound.

BRNDA, a four-piece band based in Washington, D.C., performed at Rhizome DC as part of a mini-fest that included other acts such as Knifing Around and Wheatie Mattiasich. BRNDA has been active in the local music scene for more than a decade, and seen a lot of change over the years.

[UMD alum releases new album with help from former bandmates]
BRNDA began in 2011 inside the band’s singer/songwriter Dave Lesser’s living room in Washington, D.C. Lesser decided he needed a way to express himself, so he recruited his brother and a colleague and then reached out to Gage, who worked in the same building as Lesser.

Membership in BRNDA has been fluid — Gage and Lesser are the only constant members. Gage first played the bass guitar when she joined the band.

“And I was terrible,” Gage said as she recalled the first practices.

“Yeah, you were,” Lesser said to Gage. “And it’s no problem. … It turns out that [Gage] is a natural-born drummer.”

Despite the ever-changing roster, Lesser said there’s always been an organic feel to all the change.

“The great thing is I’m friends with all the former members,” the band’s current guitarist Mark McInerney said. “If any move away, it’s like there’s an automatic place to crash because they’re still down with what we’re doing.”

In terms of the band’s sound, Lesser said there are a lot of genres he would use to describe the band, but none of the categories seem to truly define it.

Gage said if there’s one big inspiration and a group that BRNDA is always compared to, it would be Talking Heads. BRNDA takes a similar interest as its inspiration in singing about society and the banality of having a normal lifestyle.

And when it comes to writing BRNDA’s songs, the process has changed just like the band’s membership. Originally, according to Lesser, it started with him writing all the songs while in his bedroom crying. Now, Lesser comes to practice and creates music spontaneously with his band members.

“The songwriting process has opened up … and allowed all the voices of everyone’s instruments to become intermingled,” Lesser said. “I don’t ever want to go back to writing songs and just bringing them to the band.”

This collaborative element and spontaneity could even be seen when BRNDA performed at Rhizome DC. An example of this happened when McInerney sang “Aunt Linda, c. 1989,” a song which Gage performed as the lead vocalist in the recorded version. Gage also said the band performed its last song of the night differently as well, turning it from the usual big performative act to something more chill.

“I thought that was a good experience to try and do a song differently,” Gage said. “I enjoyed that.”

Lesser said he’s glad to see a diverse audience each time he plays. He said he feels good that their music can cross many lines, whether it’s geography, skin color or gender. He’s especially happy about young people loving BRNDA’s music.

“I think that one of the reasons that I don’t want to quit doing BRNDA is I don’t want to give into the idea that you’re ever too old to still make art and … be meaningful,” Lesser said.

That idea of BRNDA’s music still resonating to younger generations was present at Rhizome DC when the band members brought their own young family members to the concert. Gage held her baby daughter after performing onstage. This was her daughter’s first concert out of the womb, but before Rhizome DC, she had been with the band at 22 shows.

“When I was pregnant, I wanted to go on the road and bring her along so that it’s like setting the tone,” Gage said. “This is going to be part of your life for always, your parents are going to be musicians so that’s just how it is.”