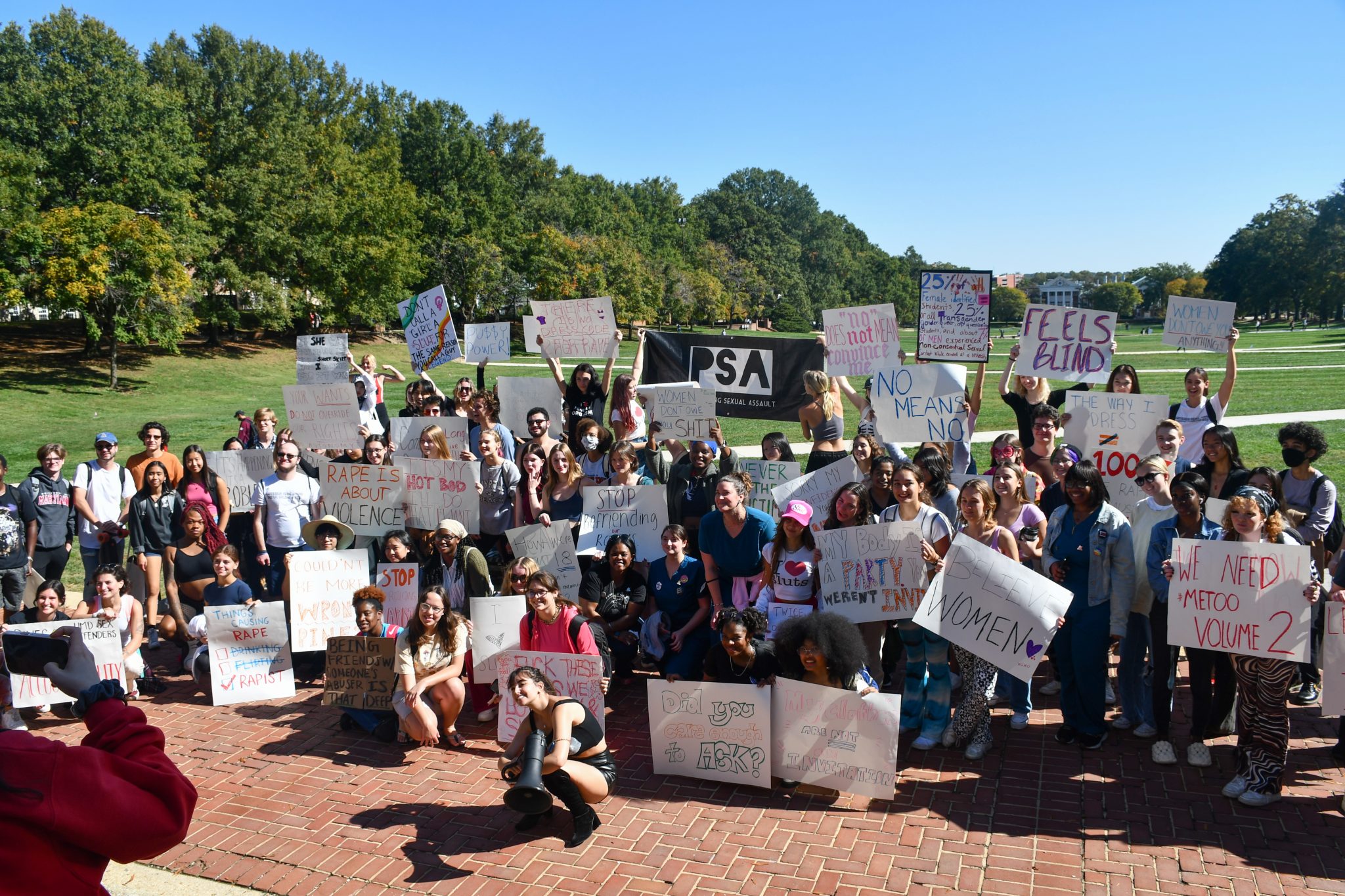 “Long live sluts.” “It’s my hot bod I’ll do what I want.” “Your wants do not override our rights to autonomy.”

These are some of the phrases University of Maryland students proudly held on posters during Preventing Sexual Assault’s annual Slut Walk Friday morning.

Organizers blasted music with lyrics about empowering women as participants created signs for the event before the walk began.

This year, PSA co-President Amanda Sherman said she wanted Slut Walk to focus on the intersectionality of sexual assault and slut shaming.

“PSA was founded out of Greek life — social Greek life, so that’s IFC and PHA — and that institution at its core is white dominated, middle-upper class-dominated and so therefore, our resources are targeted towards those people, and PSA is currently trying to move away from that agenda,” Sherman, a senior marketing major said. “We really want to make sure that all voices are heard.”

She said this intersectionality aims to include more people of color, the LGBTQ+ community, low-income students and international students.

One speaker, Deena Habash, discussed how although slut shaming is not usually associated with the LGBTQ+ community, it still happens frequently.

[‘Nature will come back’: Jane Goodall speaks at UMD about environmental conservation]

She mentioned how the HIV/AIDS crisis normalized slut shaming of gay men, bisexual people are stereotyped as cheaters for being attracted to more than one gender and lesbians are fetishized by men.

“[Not addressing rape issues is] an irresponsible thing to do as a president of a full university,” she said.

The Slut Walk consisted of sexual assault and harassment survivors speaking about their experiences at McKeldin Mall, in front of the administration building and at Hornbake Plaza.

After one survivor spoke at the administration building, Sherman handed letters to an employee from the building — students wrote the letters to Pines regarding the university’s response to sexual assault on this campus.

Carrie Campbell, a senior psychology major and sexual assault survivor, said it’s uplifting to have a “community of survivors” come together and empower each other.

Throughout the walk, Campbell held a poster they made that said, “Pines and UMD sex offenders agree upon avoiding accountability.”

“The University of Maryland does not take sexual assault seriously, particularly on the administrative end and there has just been a lack of accountability and punishment for perpetrators of sexual violence,” Campbell said. “We see you, we know you’re out there, we can smell you from a mile away, and you’re not gonna get away with this. People know what you’re doing and even if the school refuses to hold you accountable, we will.”

PSA historian Damiana Colley said she is extremely passionate about this cause and supported Sherman’s sentiment of ensuring people see the issue’s intersectionality.

“I really want to … change the narrative that sexual assault only happens to white, cis women,” Colley, a junior criminology and criminal justice and psychology major, said.

PSA members said they felt more inclined to get their voices heard after anonymous people left comments on Yik Yak in the days leading up to Slut Walk. PSA posted these comments on Instagram to show why the event is necessary.

Despite backlash, Campbell said this community will not be silenced.