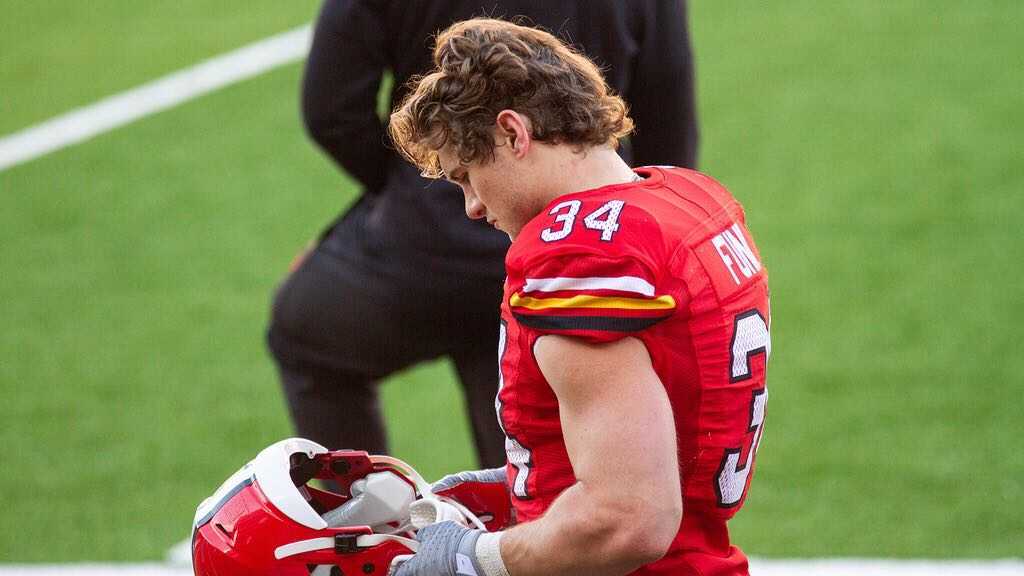 Running back Jake Funk adjusts his helmet ahead of Maryland's 27-24 overtime loss to Rutgers on Dec. 12, 2020, at Maryland Stadium. (Julia Nikhinson/The Diamondback)

Five weeks have passed in the NFL. Let’s take a dive and see how some former Terps have performed recently and their outlooks for week six.

Stefon Diggs, WR, Buffalo Bills: “The school that Stefon Diggs attended.” Following Diggs’ domination of the Tennessee Titans, scoring three touchdowns, this was the Maryland Terrapins’ Twitter bio. Diggs then cooled off and went two-straight games without a touchdown. Against Pittsburgh, Diggs bounced back with eight catches, 102 yards and a touchdown. Kansas City’s defense has been subpar so far this season, so Diggs should have another opportunity to show out in week six.

D.J. Moore, WR, Carolina Panthers: Carolina’s current quarterback situation is tumultuous. Baker Mayfield has struggled and will miss 2-6 weeks with an injury. Phillip Walker will take the starting job. Additionally, the Panthers fired their head coach Matt Rhule this week. Carolina’s offensive struggles have reflected poorly on Moore, who has one touchdown this year. The Panthers’ turnover has spurred trade rumors for Moore despite signing a lucrative three-year contract extension in the offseason. Moore may struggle to produce this weekend against the division-leading Buccaneers who have a staunch defensive secondary.

Jake Funk, RB, New Orleans Saints: The local Damascus High School product has had a hectic week. After only seeing action on special teams thus far, Los Angeles released Funk on Tuesday. Fortunately for Funk, he cleared waivers and was signed the very next day to the New Orleans Saints’ practice squad. It should be fun to watch Funk the rest of this season, given his knack for overcoming adversity.

Jared Bernhardt, WR, Atlanta Falcons: The former Tewaaraton Award winner’s story to make a 53-man roster is one people won’t soon forget. However, still sitting behind Drake London at the depth chart, Bernhardt has yet to see any action.

Darnell Savage, Safety, Green Bay Packers:  A first-round selection in 2019, Savage has proven to be  a reliable safety in Green Bay. Savage has eight interceptions in his young career. However, Savage hasn’t forced a turnover through the season’s first five weeks. In a loss to the New York Giants last week, Savage recorded three solo tackles. The Packers host the New York Jets this weekend. The Jets are playing surprisingly well this season and have a solid passing offense, so Savage should have chances to make his first turnover of the season.

Yannick Ngakoue, DE, Indianapolis Colts: Through five games, Ngakoue has been quieter than in previous years. On a positive note, Ngakoue has come alive recently, recording a sack and a half against Denver in a game that featured horrendous offense from both teams. Ngakoue can continue to improve against his former team this weekend, the Jacksonville Jaguars.

J.C. Jackson CB, Los Angeles Chargers: Since joining the Chargers in the offseason, Jackson’s had to overcome the adversity of an ankle surgery he received back in August. The corner that many proclaimed as “Mr. INT” in previous years is yet to pick one off in 2022. Los Angeles faces a struggling Russell Wilson this weekend, so perhaps this is the time Jackson gets back his mojo.

Nick Cross, Safety, Indianapolis Colts: After starting on defense through the first two weeks, Cross has seen a significant decrease in his time on the field and seems unlikely to play this weekend. He has played one defensive snap since week three. On Sunday, the Colts and Jaguars square off for the second time. Cross recorded five tackles in the Colts’ 24-0 loss to Jacksonville in week two.

Chigoziem Okonkwo, TE, Tennessee Titans: Okonkwo made his return to the DMV last Sunday as the Titans battled the Commanders at Fedex Field. Okonkwo went without a catch in Tennessee’s win. Okonkwo made an impressive catch in the back of the endzone only to land out of bounds. Tennessee has their bye in week six.