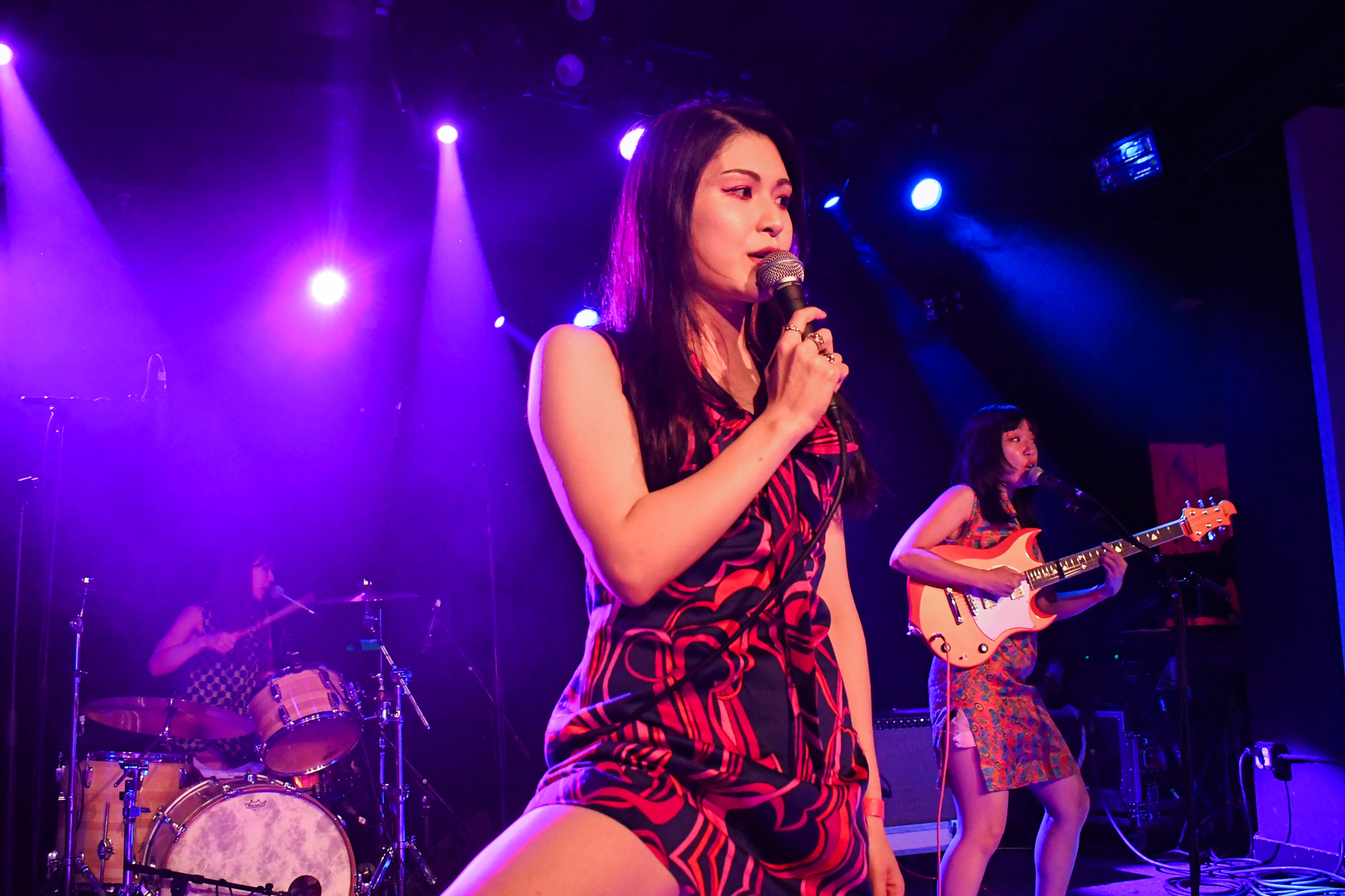 The Wharf in Washington, D.C., was alive Thursday evening, and there was something otherworldly inside Union Stage. I was certainly going to be taken to another realm by the two groups that performed that night.

Japanese punk-rock quartet Otoboke Beaver headlined the show with local band BRNDA as the opener. With one loud and the other laid-back, yet both punk, never has there been in my opinion a perfect pair of performances to ever grace a stage.

BRNDA was the more laid-back performance, but “laid-back” in a post-punk kind of way. The music was heavy with the sound of guitars and drums with angst written all over the lyrics. It wasn’t the kind of music to mosh to, but the audience definitely wasn’t just standing still either.

I don’t think there was a single still person in the crowd as most people I observed were tapping their feet or bobbing their heads, including me. And I stood close to the stage wondering why I hadn’t heard of BRNDA before and when I would be able to see them again.

In short, I believe I found a new favorite band.

Memorable highlights were two songs from their amazing album Do You Like Salt?: “Service Loser” and “Diner.” The former was an extremely fun song with lyrics that sounded like they were French but in reality it was just really good English wordplay. The latter was the kind of song where the lyrics aren’t sung but instead spoken fast and with rhythm, which BRNDA drummer Leah Gage performed spectacularly.

I can’t really express how much I loved BRNDA’s set. Every song was either very upbeat or lyrically interesting and sometimes even humorous.

It wasn’t just the songs that were good. The band had great charisma, charming the crowd around me. I felt as though their energy grew throughout the performance — it was close to the end when guitarist Mark McInerney switched with Gage on drums and was hitting the cymbals so hard, one of them fell off.

But that wasn’t even the end of the show. Next came Otoboke Beaver, who’s onstage power I will never forget or underestimate again.

If BRNDA was ramping up the energy during their set, then Otoboke Beaver easily grabbed the torch and carried it to new heights. People roared and whistled just atthe sight of the band appearing before them.

Their music was a blast, and the crowd was not afraid to show it. A gigantic mosh pit formed early during the set which I found myself in the middle of. It moved like an ocean — back and forth — and by the end of it, I was in a completely different place than I started. The crowd had also grown so large, I could hardly see the back of the venue from where I was.

Otoboke Beaver’s sound was absolute pure punk rock. I could feel my entire body vibrate while at the mercy of their music. I’m not usually a fan of punk rock, but at that moment I couldn’t help but admire Accorinrin’s vocals, Hiro-chan’s bass guitar, Kahokiss’ drumming and Yoyoyoshie’s enthusiasm while playing her bright orange guitar.

The band members knew how to excite an audience. Throughout the show Accorinrin would come right up to them and look into the cameras of the many phones being held up in the air, and people reached out to her as though she were a deity. Meanwhile, Yoyoyoshie’s previously mentioned wild enthusiasm manifested itself in moments like when she crowd surfed around the venue and when she seemed to have been biting down on her guitar in the midst of playing it.

Otoboke Beaver’s energy was nonstop during the whole show until the end. And when the end finally came, the energy just stopped. At the end of their last song, Accorinrin dropped the microphone and walked off stage with the rest of the band. For a couple of minutes — which felt like hours — they left the crowd hanging as they began to beg the band to come back.

I almost thought this would be the first concert where I would witness a band refuse an encore, but Otoboke Beaver did eventually come back. They gave the audience what it wanted.

I came to watch Otoboke Beaver without having listened to any of their music beforehand. I began that night as a stranger with an invitation and ended the night as a fan with a shirt.

It was weird to climb up the stairs of Union Stage and walk back to The Wharf where people strolled along the water or sat themselves on benches as though it was just a normal night. I just had a once-in-a-lifetime experience with some of the best music I’ve ever listened to, yet these people just went about their business.

Do they even have a clue of what had occurred just below their feet at Union Stage?