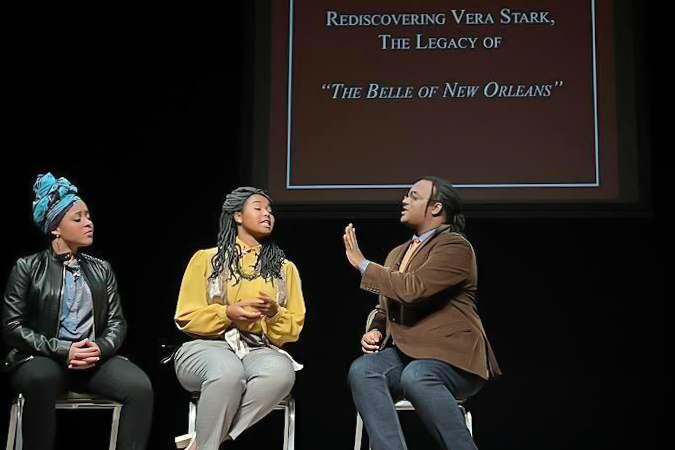 It is no secret Black artists have had an especially disadvantaged position in their industry — especially Black women. The further back we look, the more restriction we observe in artistic freedom and liberty. The play By the Way, Meet Vera Stark examines this phenomenon through the lens of the 1930s.

The University of Maryland’s theatre, dance and performance studies school will put on By the Way, Meet Vera Stark by Lynn Nottage starting Oct. 7. Students will have the chance to witness this excellent and imperative exploration through narrative until Oct. 15.

By the Way, Meet Vera Stark tells the story of a passionate and aspiring Black actress in conjunction with her complex relationship with white actress Gloria Mitchell, who is fading away from the limelight and her original glory. Vera’s complex relationship with Gloria also stems from Vera being Gloria’s maid. The story is told through screwball comedy, all while exploring the nuances of being Black in the acting world, as we still see today.

The first act takes place in the 1930s. Later, the play skips forward to 70 years later, where the cast is left to discover what happened to this budding talent of Black actress Vera Stark, washed away by white Hollywood.

Two-time Pulitzer prize winner and American playwright Lynn Nottage wrote the play, and it premiered in 2011. Nottage is known for “exploring periods of American history from unexpected vantage points and addressing some of society’s most complex issues with empathy and humor,” according to the MacArthur Foundation.

Nottage is most known for her award-winning plays Sweat and Ruined. She also most recently wrote MJ: The Musical this year, focusing on the story of world-renowned singer Michael Jackson.

The university’s production is being led by directors Scot Reese and Alvin Mayes, both lecturers at this university. And it is set to employ “traditional stage techniques with cutting-edge visual technologies and effects,” according to The Clarice.

The set changes are impressive as the plot actually slides drastically in time, as the main characters try to explore what happened to Vera Stark? How did her career become erased from history?

Reese also shared that the production consists of undergraduate students serving as cast and production management, while lighting and set design are at the hands of graduate students who have experience doing professional work in the theater industry.

“This story is significant because … so many names and faces of the ‘30s of Black Hollywood, [and] of early Black actresses, they’ve been forgotten,” Embrack said. “These forgotten faces [and] these forgotten names actually have had an impact, even if we didn’t know who they were.”

Ryan shared that the play will have viewers on the edge of their seats as the plot unfolds, commenting on Nottage’s playwriting style.

“Lynn Nottage … so clever in this way and that she writes the two acts that and that they inform each other and that you’re on the edge of your seat the whole time just waiting to hear what’s coming next and what everyone has to share,” Ryan said. “There’s this question that constantly is asked: What happened to Vera Stark?”

By the Way, Meet Vera Stark is meant to be watched carefully, because you just might miss something to help you connect the dots.

“You got to watch it closely because there are little easter eggs that are given to you.” Reese said. “There’s gonna be a revelation at the end that you will probably talk about.”

The production is set to play six times between Oct. 7 to Oct. 15.

The story of Vera Stark is a necessary addition to the conversation about race in theater and the arts industry, as arts institutions begin to explore names and faces that have been erased from history, even if they are fictional.