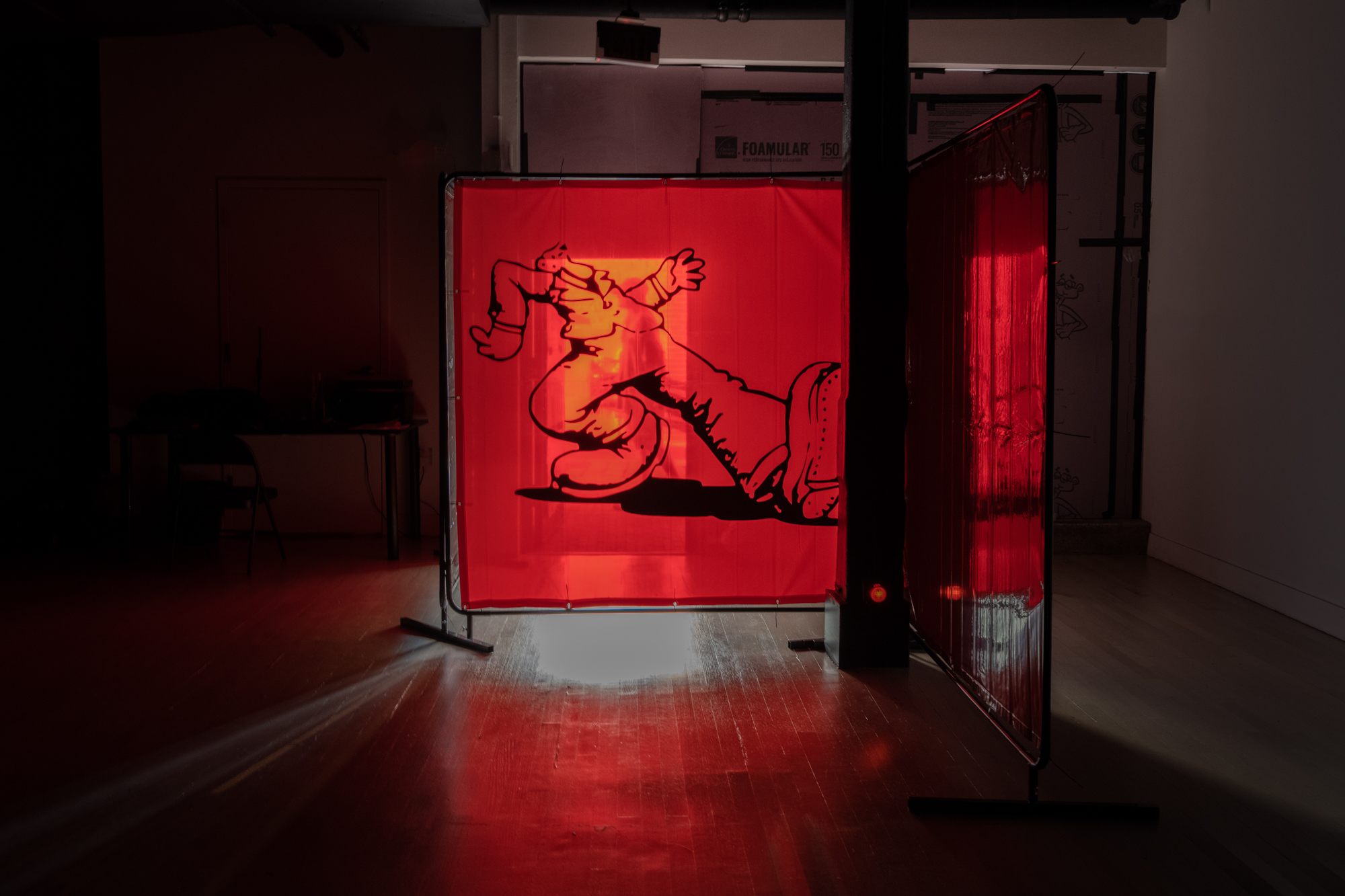 Down a short brick and cobblestone alley, parallel to the C&O Canal in Georgetown, the Von Ammon Co. art gallery props its door open to welcome visitors into an otherwise seemingly closed showroom.

Cloaked windows shroud the room in darkness as the coated black flat-screen televisions lining the walls suck the light from the room. The exhibit posed as a void into the darkness that is the decomposition of the American household.

Casting the oversized centerpieces of most American living rooms in polyurethane, artist Catharine Czudej loosely references the patterned tapestries in the background of Leonardo da Vinci’s The Last Supper. Where the supper itself is absent, the reimagined, modern-day tapestries rewrite a scene of betrayal while pulling focus to this era’s most popular plastic wall decoration.

“As you view the TV and how the light from your phone reflects on the TV, it’s more of a motif as to how the TV in the American household really eats the light around it,” said Kamryn Dillon, a University of Maryland junior studio art major employed at the gallery. “[The TV] really suffocates the space within the family.”

Come to Daddy is Czudej’s second solo exhibition at the Von Ammon Co. gallery in Washington, D.C. The New York-based artist was also a part of the gallery’s previous exhibition, Focus Group Three, which displayed a collection of work from 15 artists.

Based on the ripple effects of “boomer culture,” Czudej’s current installation draws on the pseudo-religious tropes embedded within populist culture and the numinous feeling of suburban metaphysics she experienced growing up in the Midwest.

“I hope that the extreme environment—almost pitch black, scented with frankincense, and the vague presence of the night lights and the looming televisions—puts the viewer into a space that evokes memories of religious sites,” Czudej wrote in an email. “But [I] also [hope] perhaps [the exhibit reminds viewers of] the darker zones of exception in the American household, whether that be the garage, basement, or apartment hallway.”

While simulating the 1960s immersion of the television into popular culture and the American home, Czudej favored a more extreme environment where certain senses such as sight are dulled to heighten other sensations.

“It made me think about the saying, ‘see no evil, hear no evil, speak no evil,’” BreAna Bell-Freeman, a university alum who visited the exhibit twice, wrote in a text message. “If you cannot see it, it will do no harm to the receiver, but the art was presented in such a way where even though you cannot see it too well, the pop culture and the advertisement industry will find other ways to stimulate and grab you.”

Taking on an extended meaning from its namesake, the exhibit references the 1997 Aphex Twin track “Come to Daddy” to embody the previous decades’ gradual adoption of satanic panic as a lucrative staple of rebellion.

Aside from displaying how televisions can both disconnect and overstimulate a household, the exhibit furthers the notion of the title through its subversive commentary on how popular culture and entertainment industries have mastered the art of persuasion, according to Bell-Freeman.

Saliently featured on the gallery’s facade, an outlined black figure thrusting himself forward with an oversized foot ready to step to work provides another popular culture idiosyncrasy. Robert Crumb’s famous cartoon of jazz musician Blind Boy Fuller from his Keep on Truckin comic is blown up to recognize the proletarian, corporate pressure to keep moving and continue working despite stress and fatigue.

“These pieces, and overall components of slight eeriness, screamed OVER-STIMULATED SOCIETY in a way where society doesn’t fully realize how television and advertisement is effing us over,” Bell-Freeman wrote. “Our minds are being flooded with everything all at once… [but] the power can be in our hands if we want it to, all it takes is filtering what we allow ourselves to see, hear, and thus consume.”