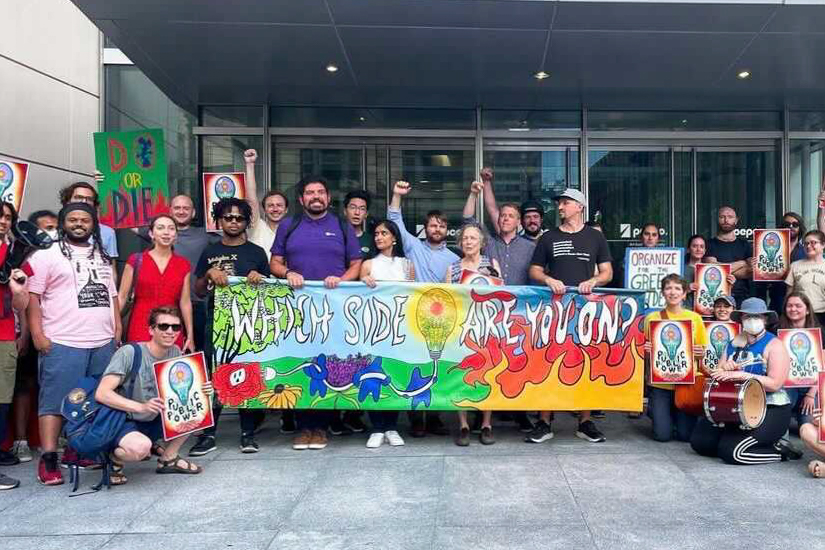 Sitting around the dinner table, University of Maryland alum Camila Tapia-Guilliams and their co-founders of Transverse Cooperative tried to find the best words to describe their artwork. Tapia-Guilliams, said the cooperative needed a name to capture the movement their art made through various spaces in Maryland and Washington, D.C.

“We wanted something that gave a feeling of being outside, because what we’re doing is bit outside of what’s been done in the art industry,” Tapia-Guilliams said. “We also wanted to have this idea of transformation and creating something new. So, we came up with Transverse, which I also just like because two of the three [the co-founders] are nonbinary, and so it’s like a trans-universe.”

Transverse Cooperative is a democratically run artist collective that uses art to further amplify groups focused on liberation work, mutual aid and political organizing. Also aimed at furthering the working conditions of artists, the cooperative hopes to bring artists together in solidarity while curating artwork for protests, rallies and commissioned workshops.

After struggling to find an artist-led collective that not only met the needs of artists but operated under clear management, Tapia-Guilliams and their co-founders Aviah Krupnick and Ellie Yanagisawa were intentional about creating a cooperative giving artists equal opportunities.

Tapia-Guilliams’ previous experience with the Maryland Food Collective at this university, which used a worker-owner system for mutual aid, provided a perfect model.

From 1975 to 2019, the Maryland Food Collective served the greater College Park community to promote food justice while combating local food deserts surrounding the university, according to Tapia-Guilliams.

The collective employed a worker-owner structure in which the students or people from the community who worked a higher amount of hours every week did both managerial and administrative tasks as well as storefront responsibilities.

“Anyone could just walk in and say, ‘Hey, I want to volunteer for an hour,’” Tapia-Guilliams said. “That way, if you wanted to work for your lunch, you could pretty much work one hour and then buy a sandwich with what you earned.”

Nevertheless, the cooperative has already begun taking volunteers from the community as they curate art for various commissioned events. For example, for one protest sponsored by the Debt Collective, Transverse Cooperative hosted an art build where volunteers helped participants make banners and signs with stencils and spray paint.

Beyond the work itself, art builds are a collaborative action that allows for bonding between organizers, according to senior public health science major Vivian Flanagan.

“I find it honestly really therapeutic to write out some of those slogans together and really internalize what this means and why I would even be writing such a phrase,” Flanagan said. “It just makes the message even more powerful, and I’m the one writing it.”

In another commission for the Public Power Campaign, which advocates turning Pepco into a publicly owned utility to lower prices for Washington, D.C., residents, the cooperative curated digital art for protest signs, banners and T-shirts.

The cooperative adorned posters with a flash of blood orange with a calming blue lightbulb at its center. A bohemian-style sun shines at the peak of the bulb, nourishing the vines weaving around the wires of artificial light. Sprouting out of the base of the bulb, the ivy wraps around bold, black letters that read, “PUBLIC POWER.” A set of hands are cupped below the words, supporting the message.

“Everyone was very into the art,” said Michael Brennan, a university alum and organizer for the local Democratic Socialists of America chapter.  “People were excited to take that home with them.”

In the years to come, Tapia-Guilliams hopes to see the cooperative own a whole apartment building in Baltimore, comprising both artist housing and studios. Then, the cooperative’s focus will likely turn to owning a cafe gallery in Washington, D.C. This way, Tapia-Guilliams noted, the collective can use the energy and resources from both major cities to expand its roots and continue supporting local artists.

CORRECTION: A previous version of this story’s headline misstated the name of the Transverse Cooperative. This story has been updated.