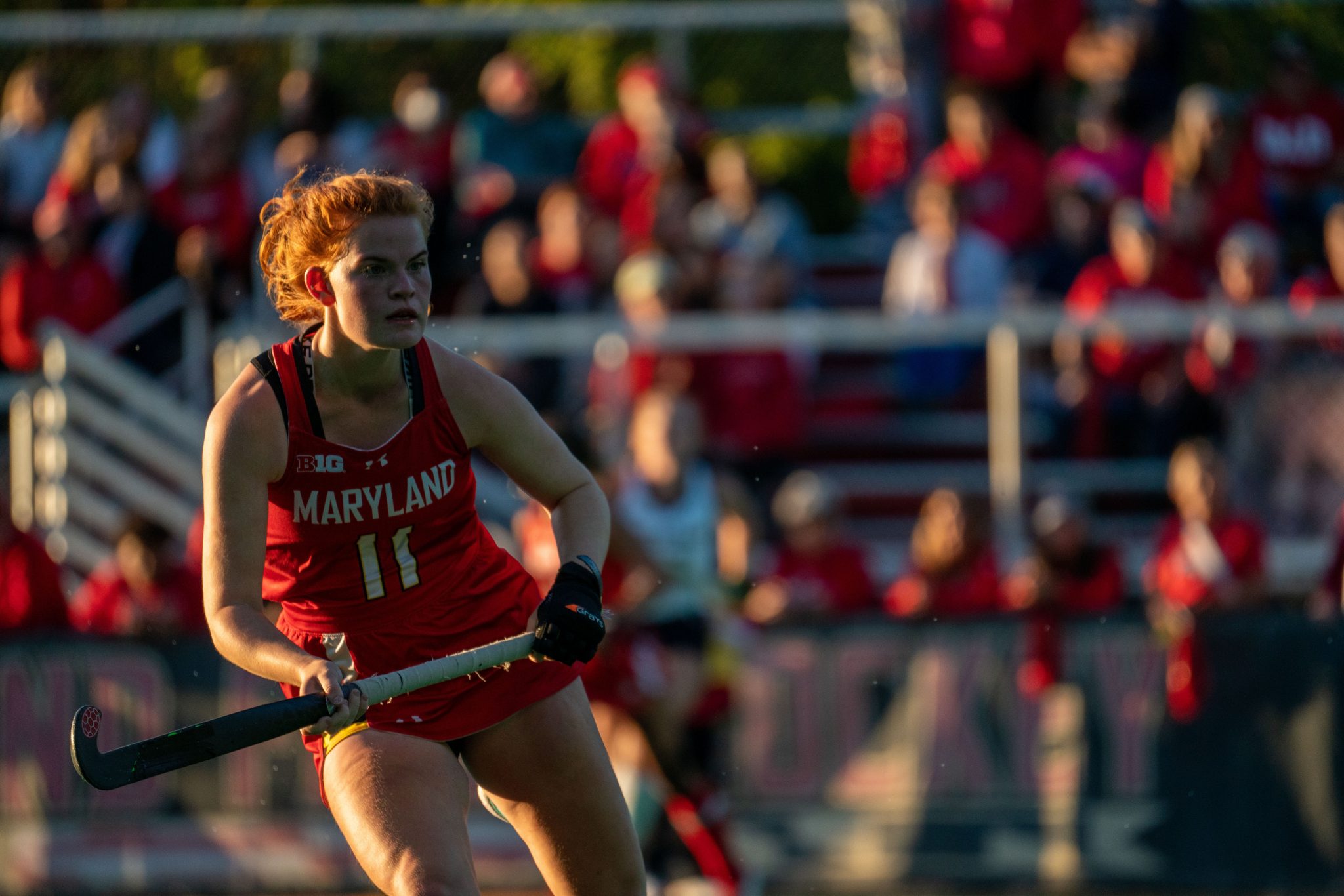 Penalty corners were easy to come by for Maryland field hockey all game long. Despite that, the Terps were unsuccessful on all seven of their attempts in regulation as Maryland and Michigan needed overtime to decide the Terps’ home conference opener.

Leah Crouse had a chance to change that scoreless streak in the opening minutes of the extra time.

She collected Emma DeBerdine’s insertion and passed left to fellow graduate transfer Danielle van Rootselaar. She took a shot that was blocked directly back to Crouse, who collected the rebound and fired another. The second flew past Wolverines goalie Anna Apieker and slammed into the back of the goal cage for the game’s first score over 60 minutes after it began.

No. 3 Maryland was forced into overtime for the second consecutive game. But unlike Tuesday, the Terps were the ones scoring a game winner in extra time, taking down No. 8 Michigan, 1-0.

“We had an opportunity with Princeton to do something we haven’t done yet this year, with an entirely new backfield and a new goaltender, which was go to overtime,” coach Missy Meharg said. “Clearly we worked on it. We spent a lot of time yesterday simulating exactly what played out today.”

The victory comes three days after Maryland suffered its first defeat of the season at the hands of Princeton. The Tigers were the first team all season to outplay the Terps’ defense, successfully penetrating through the left side specifically to get shots on goal and penalty corners.

In the aftermath of the loss, Missy Meharg sought to correct those fatal errors. Maryland was able to keep Michigan out of the shooting circle in the first half, which featured a combined five shots taken by the two teams.

Both sides struggled to move the ball up the sideline, with both teams intercepting long passes up the wide parts of the field, something Meharg said would be a focus in the game earlier in the week. Combined with stiff defense inside either circle, the first 30 minutes ended in a scoreless tie.

“Both defenses were amazing,” Meharg said. “Maryland didn’t give a penalty corner … how does that happen? Our defense is just incredible. We have depth in our defense, so we’re able to rest people. We wear GPS units, we know when people are super gassed.”

Maryland squandered its second penalty corner of the game attempt, which came in the opening minutes of the second half. Danielle van Rootselaar couldn’t corral the insertion and the defense prevented her from taking a shot.

It got another penalty corner seconds later, but Maura Verleg missed wide right. Two more penalty corners were awarded later in the quarter. Neither resulted in scores.

The Terps were zero-for-five on penalty corner tries and only one of their six shots were on goal through the first three quarters. Michigan sported an identical shot-on-goal rate.

Both scoring droughts maintained through the early portion of the final quarter despite a multitude of quality scoring chances for Maryland. Van Rootselaar fired a shot from the left side after darting through the circle but was blocked by Spieker.

Maryland’s Ericka Morris-Adams was given a green card in the quarter’s final minutes and Michigan was penalized with a yellow card. Even with players up, neither side took advantage to force Maryland into its second-straight overtime contest.

Three of the Terps’ 12 shots were accurate in regulation, and they were stopped on all seven of their penalty corners.

Crouse, who said Maryland “took a more aggressive approach in overtime,” ended the unsuccessful penalty corner streak three minutes in. On Tuesday, the Terps were on the opposite side of an overtime game winner. On Friday, Crouse’s score allowed Maryland to rebound from its first defeat of the season with a thrilling victory.