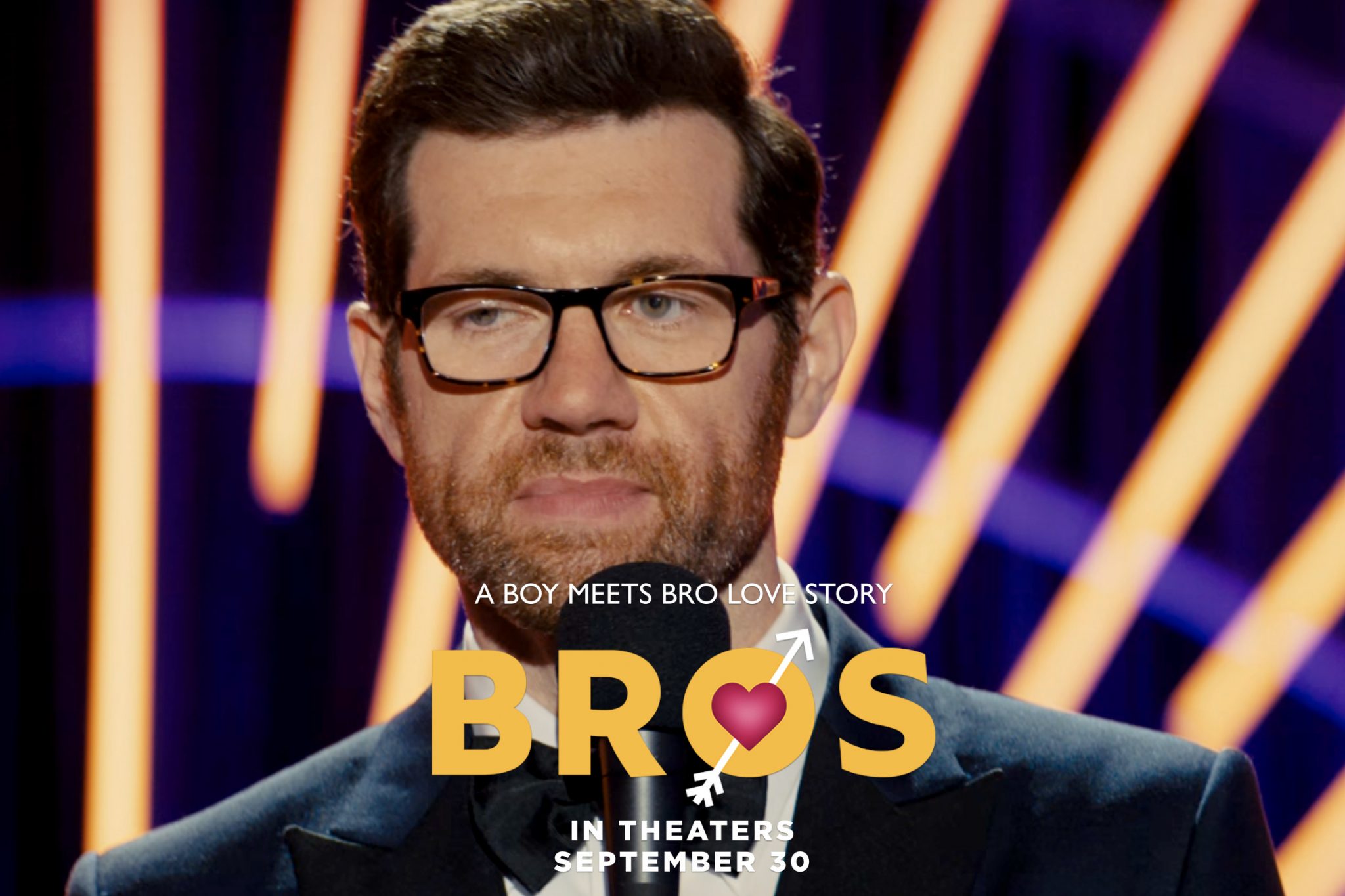 By Harrison Deitz
For The Diamondback

Following its world premiere at the Toronto International Film Festival, the upcoming rom-com Bros made its way to College Park. On Tuesday, SEE and the LGBTQ+ Equity Center screened the movie early to University of Maryland students at Hoff Theater.

In the Judd Apatow-produced film, comedian Billy Eichner gives a thoroughly entertaining performance as Bobby, an openly gay podcast host who appears to be content with not being in a loving relationship. At a club, his character catches feelings for Luke Macfarlane’s Aaron, a ripped lawyer who wouldn’t normally fall into his “type.” Even though the two men feel they have nothing in common, they find themselves gravitating toward each other.

Romantic comedies aren’t being released as often theatrically as they were in previous years, with the majority of them being regulated to streaming services. Bros is especially significant as it is the first entry in the genre centered around gay characters to be released exclusively in cinemas by a major studio.

The Universal Pictures production’s primary cast is entirely comprised of LGBTQ+ actors, marking another first for a major theatrically released film. Eichner, who is openly gay, serves as a co-writer on the script, in addition to playing the leading man.

Benny Kotler, a junior information science major, came to the advanced screening because they had seen Eichner in other work.

“I’m a big Billy Eichner fan. I loved him in ‘Parks and Rec,’” Kotler said.

Laughter could be heard all throughout the audience at numerous points during the nearly two-hour runtime. The only sound louder than the crowd’s giggles was the round of applause at the end of the film.

“Oh my God, it was so good,” sophomore psychology major Leo Osei said. “I don’t think that gay media has ever represented bro culture.”

Bros is also much more than your typical rom-com. It’s an emotional rollercoaster.

At times, it feels like a full-on drama. There are many conflicts between Eichner and Macfarlane’s characters that are emotionally gripping due to the actors’ chemistry.

While there are many dramatic elements, there is also plenty of joy to be found. Prior to their relationship, each of the two main characters felt unfulfilled. It was heartwarming to see them change each other’s lives for the better.

It also put a smile on students’ faces to see so much representation in mainstream entertainment. In the film, Bobby serves on a board that is working to open a new museum celebrating LGBTQ+ history and culture. With this plot point being an integral element of the film, in addition to the diverse cast, Bros felt like a love letter to the pride movement.

“It was unapologetically representative of tons of different demographics and identities, which I think is super important in this day and age,” sophomore studio art major Elijah Doster said. “It had all the great elements that you would want in a romantic comedy.”

Bros earns its spot in cinemas, succeeding in being a genuinely funny romantic comedy, while also providing its fair share of heartfelt moments.