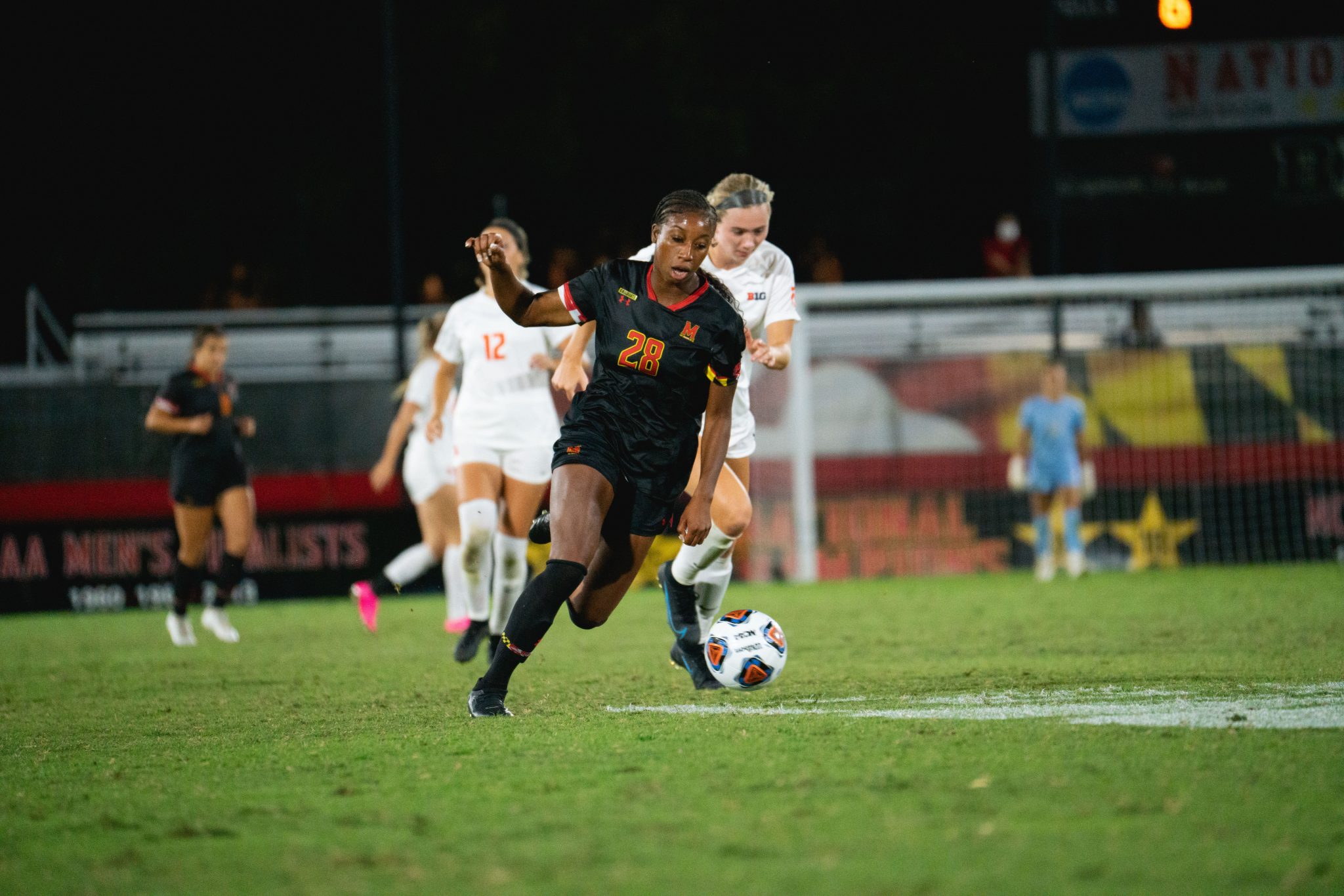 Illinois found space near the edge of the 18-yard box just 12 minutes into the second half.

Maryland women’s soccer had controlled the game to that point, but Fighting Illini midfielder Sydney Stephens took a touch before lacing a game-tying goal that found the upper corner beyond Terps’ goalkeeper Madeline Smith.

The shot marked just the third of the night for the Fighting Illini after 57 minutes of play, but not the last as they came back Thursday to deliver the Terps a 3-2 home loss.

“I felt like we played into their game plan in the second half and we forgot to execute our game,” head coach Meghan Ryan Nemzer said.

Maryland scored under a minute into the match on a goal from Alyssa Poarch. The fast start mirrored last week’s match against Michigan when Catherine DeRosa had the Terps’ first chance of the game in the opening minute.

DeRosa found the ball just beyond the half circle before looping a through ball to Poarch, who found space behind the Illinois backline. Poarch then timed the ball’s bounce before unleashing a strike toward the far post to give Maryland the 1-0 lead just seconds into the match.

“It was a good feeling, tonight was just one of those nights where I felt like myself,” Poarch said.

Maryland’s strong play continued through the first half. Mia Isaac and Poarch found gaps in the Illinois defense, finishing with two shots each.

Sydney Urban and Amanda Schafer also got involved offensively with both players generating a shot each. Maryland ended the half with seven shots total, forcing two saves from the Illinois goalkeeper.

At the end of the first half, the Terps controlled 66 percent of possession and forced the Fighting Illini to spend the majority of their possession near their own goal.

“We spoke a lot about ‘swing first’ and that’s sort of been our mentality,” Nemzer said. “We are creating opportunities … our forwards are getting more confident with every game.”

But Illinois’ second-half response allowed them to impose their will on Maryland. Less than ten minutes after Stephens’ equalizer, the Terps failed to clear a set piece. Illinois defender Ella Karolak found the ball at her feet inside the box and placed a shot into the bottom side netting.

The Fighting Illini found their third goal in the 72th minute after an awkward bounce left the Terps chasing the ball into their own box. Illinois’ Ashley Prell beat the backtracking Maryland defense to slot a grounded finish beyond Smith to put the Terps in a two-goal deficit.

The Terps allowed three goals in under 20 minutes, the first time they have conceded more than one goal in a game this season.

“The details and habits is what gets you in the Big Ten,” Nemzer said. “I thought that we forgot what made us a great defensive team … at moments we tried to solve things individually instead of staying together as a unit.”

Maryland made a brief comeback when Olivia Hicks found the feet of Mikayla Dayes, who scored her second goal in as many games to bring the home team within one goal in the 78th minute.

Illinois completed their second-half comeback against the Terps, handing them their first Big Ten loss. Maryland travels to No. 4 Rutgers Sunday as head coach Meghan Ryan Nemzer returns to the program she was an associate coach for eight years.

“It’s going to be a little bit weird going back, going to the visitor locker room and remember what bench I need to go to,” Nemzer said.