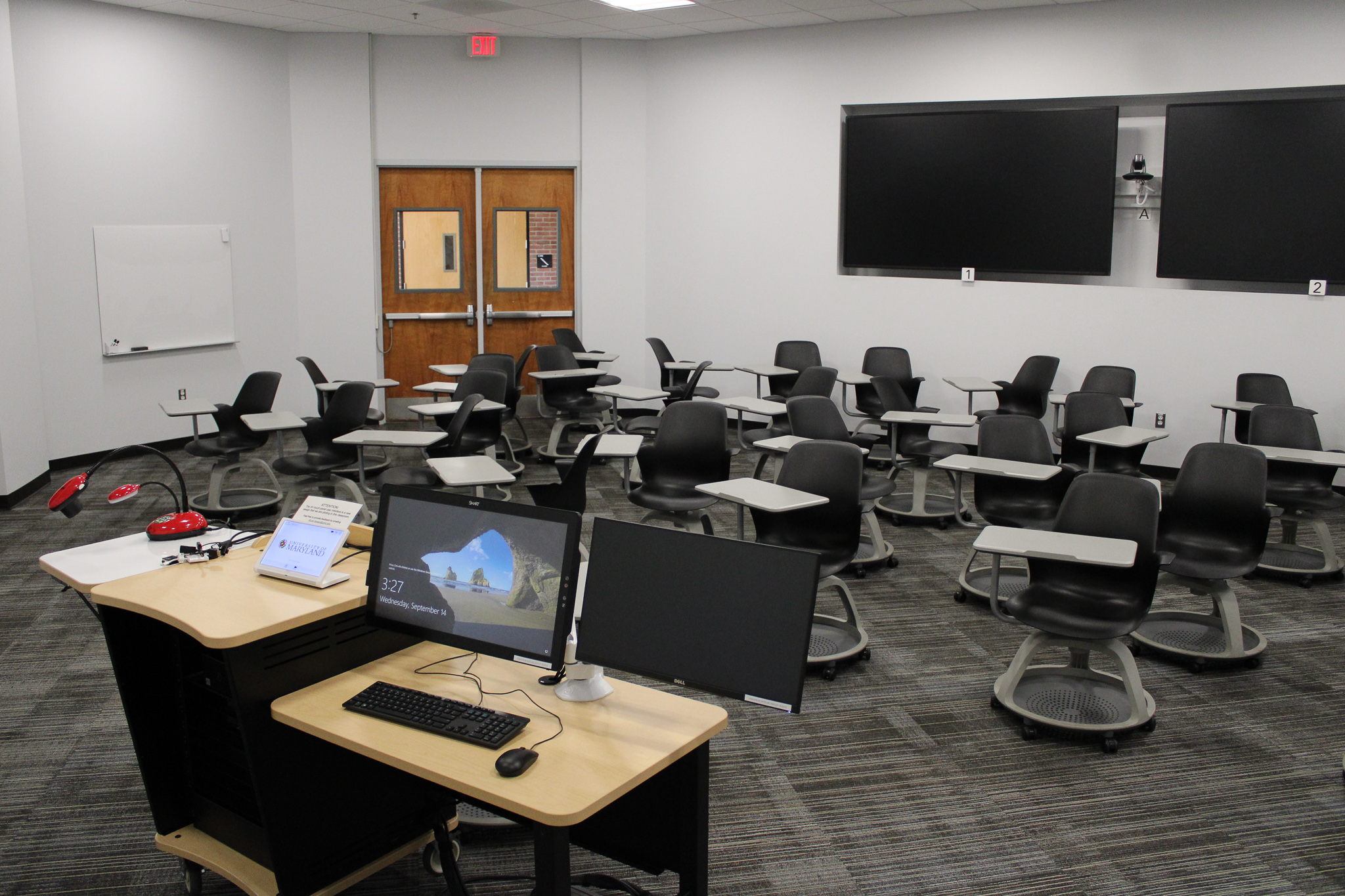 The University of Maryland created a new HyFlex classroom — a room designed to blend in-person and asynchronous learning — in the Art-Sociology building this semester.

The change was a part of a series of classroom updates made this past summer.

The HyFlex classroom is housed in room 1213 of the Art-Sociology building and was redesigned to allow students learning in person to connect with those learning virtually, according to a university announcement. The rows of built-in seats customary to older lecture halls on the campus have been replaced with rotating desks, which are wheeled chairs with a small table attachment and circular tray underneath. The tiled floor was also replaced with carpeting.

The new room features four TV-screen monitors — two toward the front of the room, two on the back wall. It shares many similarities with classrooms in the Edward St. John Learning and Teaching Center. Sociology adjunct professor Dr. Daniel Swann, who teaches SOCY100 in the HyFlex classroom, loves its flexibility. The room allows instructors to put different slides on each screen, Swann said. For example, he can put videos on one screen and discussion questions on another.

The teacher’s desk in the front of the classroom has two computer monitors and an AV touch panel — a new interface being tested in this classroom.

Aryn Schriner, an anthropology graduate student who teaches a course in the HyFlex classroom, said they were surprised by the gorgeous room, particularly the display screens.

“I also am quite taken by the smart monitor,” Schriner said. “As a kid in school, I was right there as Smart Boards were being introduced, so the fact that I have a smart monitor in front of me is really fun for me.”

The HyFlex classroom eliminates what Schriner called the “hierarchy” of the traditional classroom, in which students face the professor at the front of the classroom typically with their backs toward one another.

“Here, I can move around. I can come stand in the middle of [the room],” Schriner said. “People can move around on these chairs so much more easily and do group [activities].”

“It’s easier to hold discussions with other people because you’re able to scoot closer to another individual or group together to have these conversations,” Agustin said.

Leen Jawiesh, another public health science freshman also in Swann’s class, said the choice of where you sit in a normal classroom has important implications. The new HyFlex classroom doesn’t have that issue.

“Where you sit, and who you’re surrounded by heavily impacts the way you interact with the professor and the students around you,” Jawiesh said.

Now, students won’t be left out of discussions because they can’t see the material, Swann said.

Swann — who has taught in other classrooms in the Art-Sociology building, including a large lecture hall just around the corner of the HyFlex classroom — said the updates were long overdue.

“It feels like the caliber of room that students going to [the university] deserve, rather than the cold 1970s room that they mostly left alone for a long time,” Swann said.