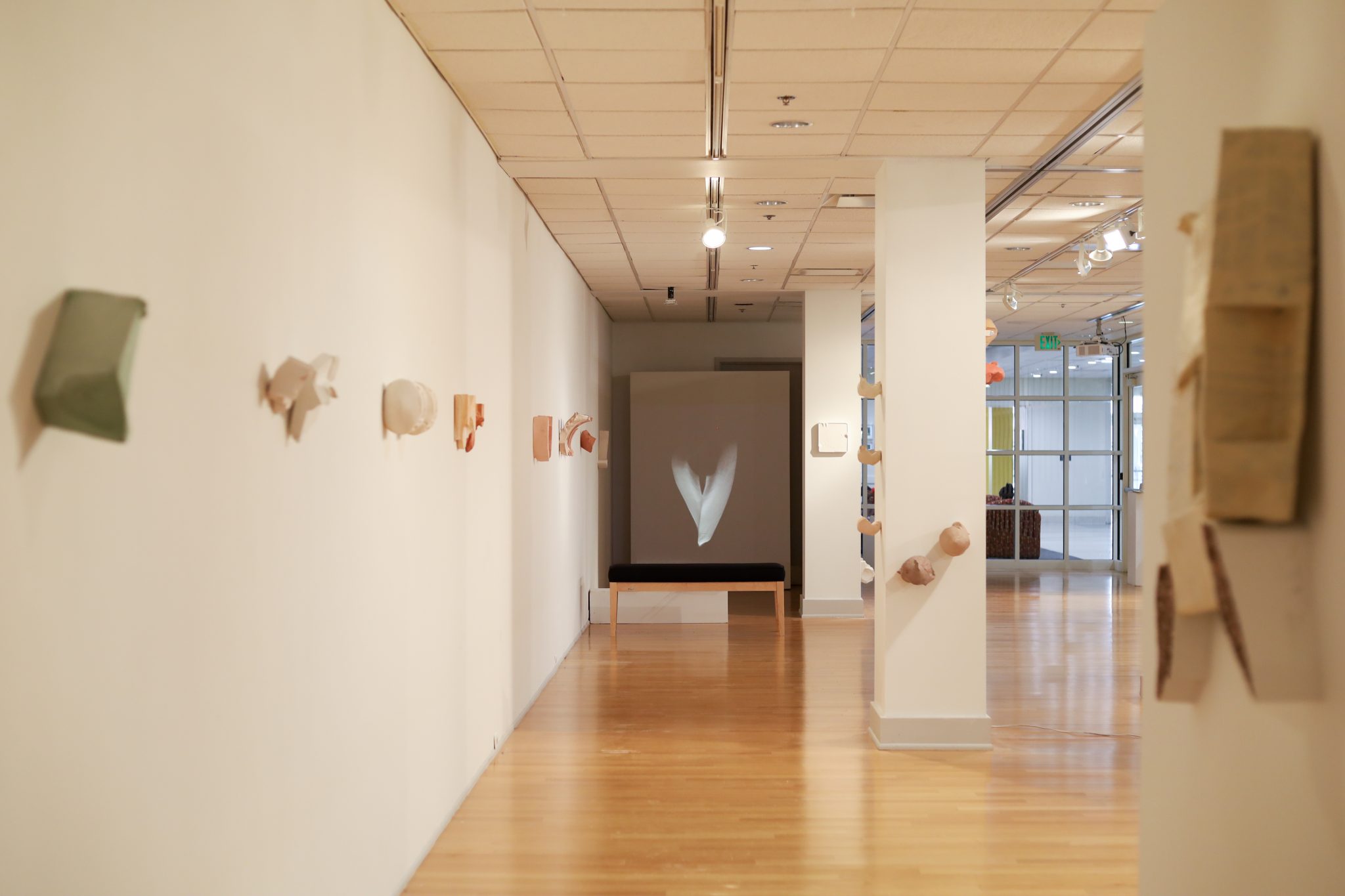 Shuffling around Stamp gallery, University of Maryland students try to make sense of the plaster and cement sculptures strategically placed around the room.

Positioned beneath the corner of a large white box, lining a wall’s lower trim just inches above the wooden floorboards and hanging beside a fire alarm, the molds challenge viewers to look for art beyond conventional means.

“In most art galleries, there’ll be a description of the art as to help the viewer try to figure out what it’s supposed to mean,” said Conell Brandner, a sophomore architecture major attending the exhibition’s open reception. “Now it’s really up to the viewer because there ain’t really no words … it’s more up to the person to think [about] what it is.”

Open until Oct. 8, the sculpture and digital media collection highlight the potential that art forms have to create new art of their own.

[A beginner’s guide to the strange world of film festivals]

Growing up, Sohn thought about the world in black and white, she said. This friction created constant conflict in her mind, eventually leading her to the artistic challenge that inspires her work: finding answers in the gray areas.

Although Sohn’s work is based on ceramics, rather than following the conventional technique of mold making that produces precise forms, she sought to redesign the process. Instead of removing air bubbles inside the molds or sanding down cracked or protruding details along the surfaces, Sohn uses those casting failures as a mode of success.

“I always kind of describe [my work] as a byproduct of the process,” Sohn said. “So I never really go ahead [and] design the form in my head in advance … I always try to pay attention to what the material does.”

Acting as more of an activator than a designer, Sohn gives the molds the autonomy to create themselves. The artwork is no longer a messenger for Sohn but comprises a new message of its own. It starts an artist-guided conversation, but the viewer is tasked with finishing the thought and finding a new meaning of their own.

The only hint Sohn gives the viewer is through the title.

“I think there is that little kind of gray area that forms for the viewer between the title and the work,” she noted. “I’m really interested in how the viewers play in that middle ground.”

In the distance between what viewers see and what they read through a title is a world of intuition, tendency and personal experiences that can shape a vague form into a reflective tool. Viewers must go beyond just relating the title to its work.

At that point, the audience becomes a collaborator, according to graduate assistant Trevon Coleman.

Throughout the gallery, Sohn avoids simply placing objects on a pedestal at the viewer’s eyeline and tries to create a free-standing artistic entity. Instead of placing a piece where it might look polite, her work merges into the space, and the setting becomes an element of the presentation.

In “Utility Wall,” the wall relies on the viewer’s position to see the form, Coleman acknowledged. Depending on where an onlooker stands, the shadow becomes a part of the work, and different viewpoints address varying parts of the workflow.

Whether shaping clay plaster or wrapping tape around cardboard, Sohn starts a conversation with her work through a free hand and vulnerability. With both constraint and letting go happening simultaneously, Sohn has seemingly perfected the art of error and given a space for her work to display the uneven, rough and abstract imperfections that at times, make works less sellable in commercial galleries.

The digital sphere, however, doesn’t seem to leave much room for mistakes. In creating this collection’s digital work, Sohn sought to transcend the representation of the physical world and find a gray area in the digital space. With this, Sohn wants to recreate the type of shortcomings she experiences in her mold making.

“The digital realm somehow seems so perfect because it’s created through the computer, but there has to be a glitch,” Sohn said. “There has to be something for me to crack through.”

Starting with a small image and expanding it to a larger scale, Sohn blurs the image, breaking down its quality. The poor quality image becomes a clearer image of its independent self, now existing in reality. Adjusting resolution and reversing the use of negative space, Sohn creates a new entity from the failure to meet conventional digital art techniques.