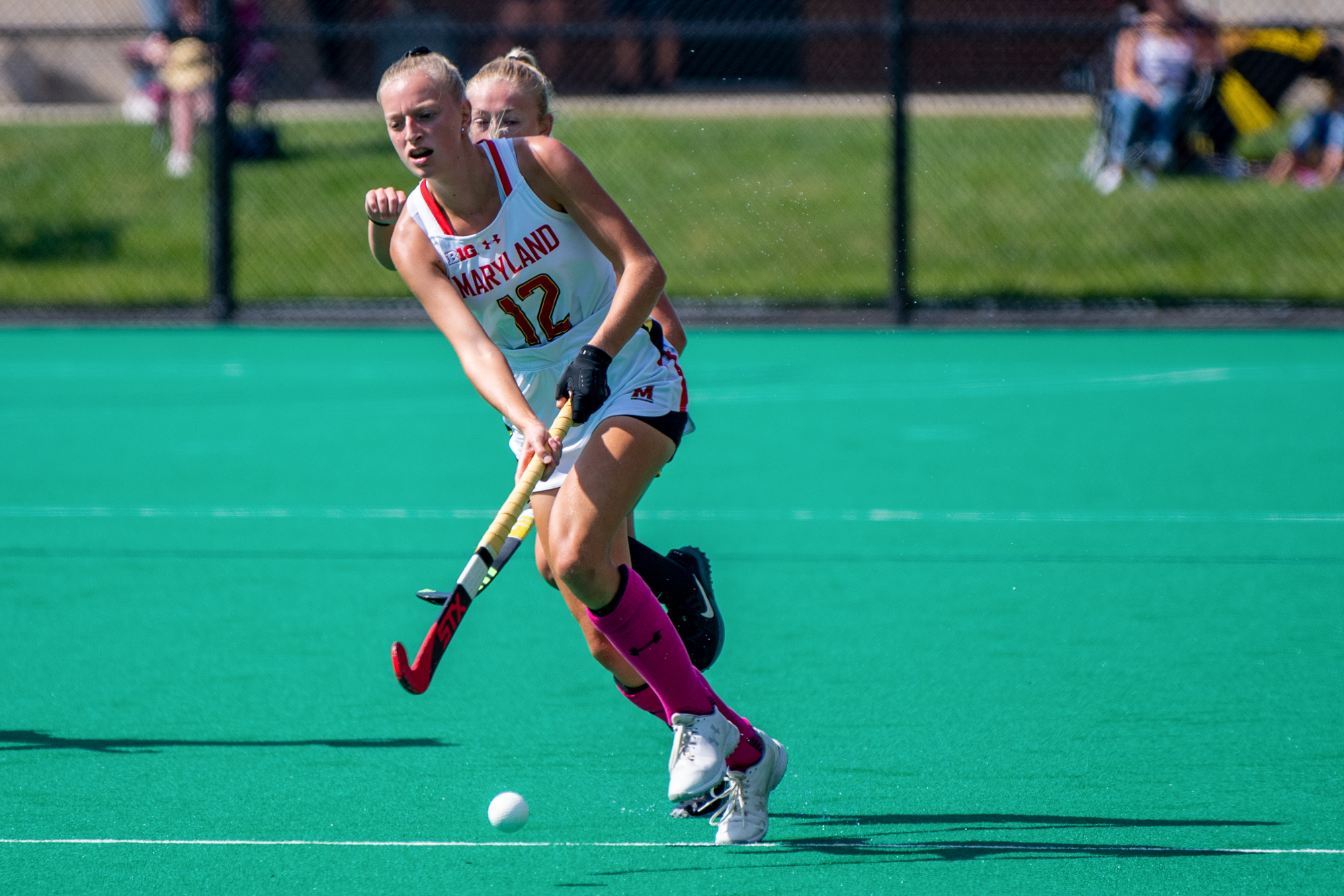 Maryland field hockey’s players had decisions to make when fall sports were either canceled or postponed to spring 2021 due to COVID-19. The Terps could either take the season off from playing the game or go overseas to one of the few countries where field hockey was still being played.

Former Terp Linda Cobano, who started 19 games as a sophomore in 2019, wanted to spend that fall playing in Germany, her home country.

Bibi Donraadt, then a junior, decided to join her. She took a semester away from College Park to play in 14 games for Germany’s GTHGC Grossflottbek, a club team based in Hamburg.

From there, a newfound desire to one day get back to the U.S. to play at Maryland was born.

“I just felt like I wasn’t done yet with my adventure in the United States,” Donraadt said. “The whole experience here is indeed the best of the best. I couldn’t see myself anywhere but here right now. I realized I possibly wanted to get that whole year back.”

That inclination grew even more a year later. Following Donraadt’s senior season — a campaign that featured heartbreaking defeats in the Big Ten and NCAA tournaments and a wrist injury that hindered Donraadt throughout the season — the feeling of unfinished business was bountiful. After winning its final four games of the regular season, Maryland matched up with Penn State in the Big Ten championships. The Nittany Lions topped the Terps in their regular season battle, but Maryland — who had won nine of its last 12 games after the loss — came into the rematch on a tear.

However, a 3-2 loss in the opening round of the tournament to the Nittany Lions sent the Terps home, ending their conference title hopes before it could really begin.

Maryland overcame the loss to reach the Final Four of the NCAA championships two weeks later. This time, a 3-2 double overtime loss to Liberty ended its season, the climax of all the roadblocks that plagued what was supposed to be Donraadt’s final season.

“The combination of me individually, not being able to do everything physical wise and then not being able to excel in the Final Four like we wanted to definitely gave me a feeling of unfinished business,” Donraadt said. “As well as how we played in the Big Ten [tournament]. That was a big point for me to make sure that I was going to have another season.”

Last season was enough to bring Donraadt back. But the players who she’d be alongside in her fifth year made it even more appealing.

“I was just so excited to play with the new girls coming in,” Donraadt said. “Missy has built this insanely exciting new team that I really wanted to be a part of for one more chance to be together with the girls, to win championships and to really have a great end to my career.”

Lastly, it featured another fifth year returnee in Riley Donnelly, whom Donraadt calls her best friend.

Donraadt has guided transfers van Rootselaar and Crouse along in their transition to a new team and school. With freshmen Morris-Adams and Klautz, she’s helped them adjust to the high-level play of the Big Ten.

“She’s got very good knowledge of the game of hockey,” Morris-Adams said. “Coming in as a freshman, she’s really helped … the other freshmen who have less experience at this sort of level. A lot of people learn from Bibi.”

The bumpy road she traveled in her senior season full of agonizing defeats and injury left Donraadt unsatisfied, wanting a smoother road for her last season. She’s had that so far, staying healthy and scoring two goals through four games as the Terps sit undefeated and ranked third in the country.

So when she and coach Missy Meharg sat down to discuss the player’s future after last season, coming back for a fifth and final year was the top of Donraadt’s priorities. Meharg felt the same way.

“Bibi and I came to that decision together, this is the best for Maryland and best for Bibi,” Meharg said. “We sat down together, we communicated. We thought it was the best situation for her to get two degrees and for Maryland to have one of their top players. It was in our favor for her to play again.”