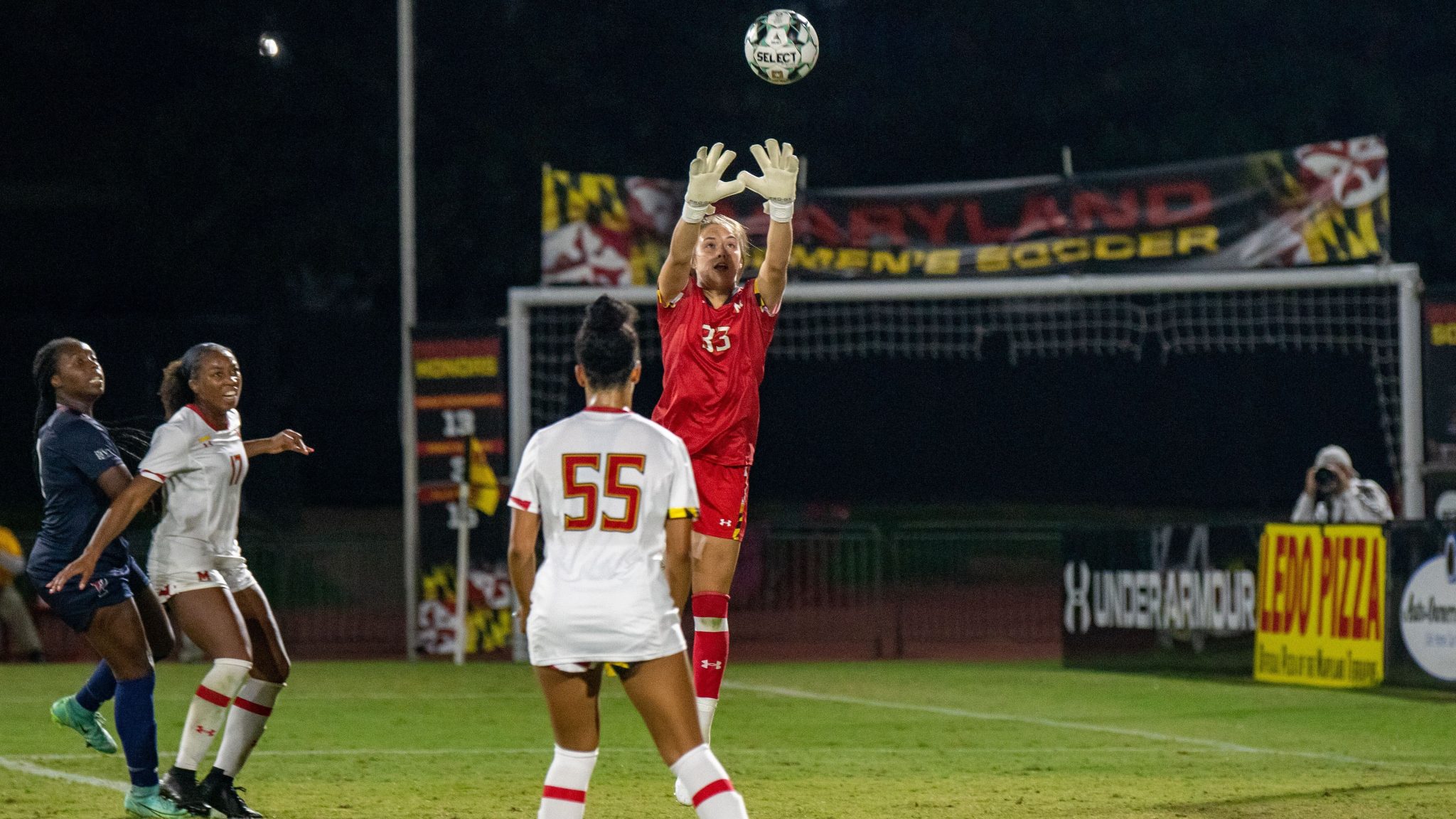 Goalkeeper Madeline Smith leaps to make a save during Maryland women’s soccer’s 1-1 draw with Penn on Sept. 9, 2021. (Joe Ryan/The Diamondback)

Madeline Smith found herself picking up the ball from the back of her net in the 33rd minute.

Despite playing well defensively,  Maryland women’s soccer found itself down first for the third consecutive time this season — this time from a free kick and the opposition’s first shot of the match.

And while the Terps answered with equalizer in time, Thursday night’s game against Penn was more of the same for coach Meghan Ryan Nemzer’s squad. The Terps dragged themselves to a 1-1 draw against Penn at Rhodes Field, the team’s third straight draw to open up the season.

Sunday evening’s matchup marked just the Quakers’ second game of the season and the third match for the Terps. Both sides were under new management.The Terps’ offense was toothless for most of the game. The game ended with eight shots for each side. Of the eight shots, four were put on target.

[Maryland women’s soccer battles to a draw against Navy, 1-1]

It took just over a half hour for the Quakers to strike first. The Terps had more fluid buildup for most of the first half, but the momentum was swept from under their feet after Sizzy Lawson fired in a freekick from just outside the 18-yard box. The free-kick opportunity came after a foul and yellow card from Malikae Dayes.

The freekick was also the Quakers’ first shot of the night. They finished the half with 2 shots while Maryland only had one. Both defenses were not allowing any consistent build-up or chance creation. However, the Terps did have six corners in the half to Penn’s one.

Still, a 1-0 deficit was familiar territory for Maryland so far this season. In each of their previous matches against Temple and Navy respectively, the Terps conceded the first goal of the game and fought back almost immediately in both games.

Sunday’s battle was no different — the Terps found their footing while down in the game.

Coming out of the first half the Terps struggled to get the equalizer they desired until the 60th minute. They found themselves in an attacking position from a Maryland throw-in when transfer Alina Stahl found fellow transfer Juliana Lynch in the box — putting the ball on a plate for a tidy finish to give the Terps the equalizer.

From then on the Terps began to pile on pressure against the Quakers. Penn’s high pressure still caused problems for Nemzer’s squad, but Maryland got a few more shots off and on goal.

The Terps’ effort culminated in a great shot from Alyssa Poarch, but Penn’s Gladu was forced to make the second save of the night, and possibly the most important.

The pressure wasn’t enough for the Quakers to cave in, leaving Maryland the third draw of the season. The Terps will have their first home game of the season next week against Georgetown.