Maryland women’s soccer battles to a draw against Navy, 1-1 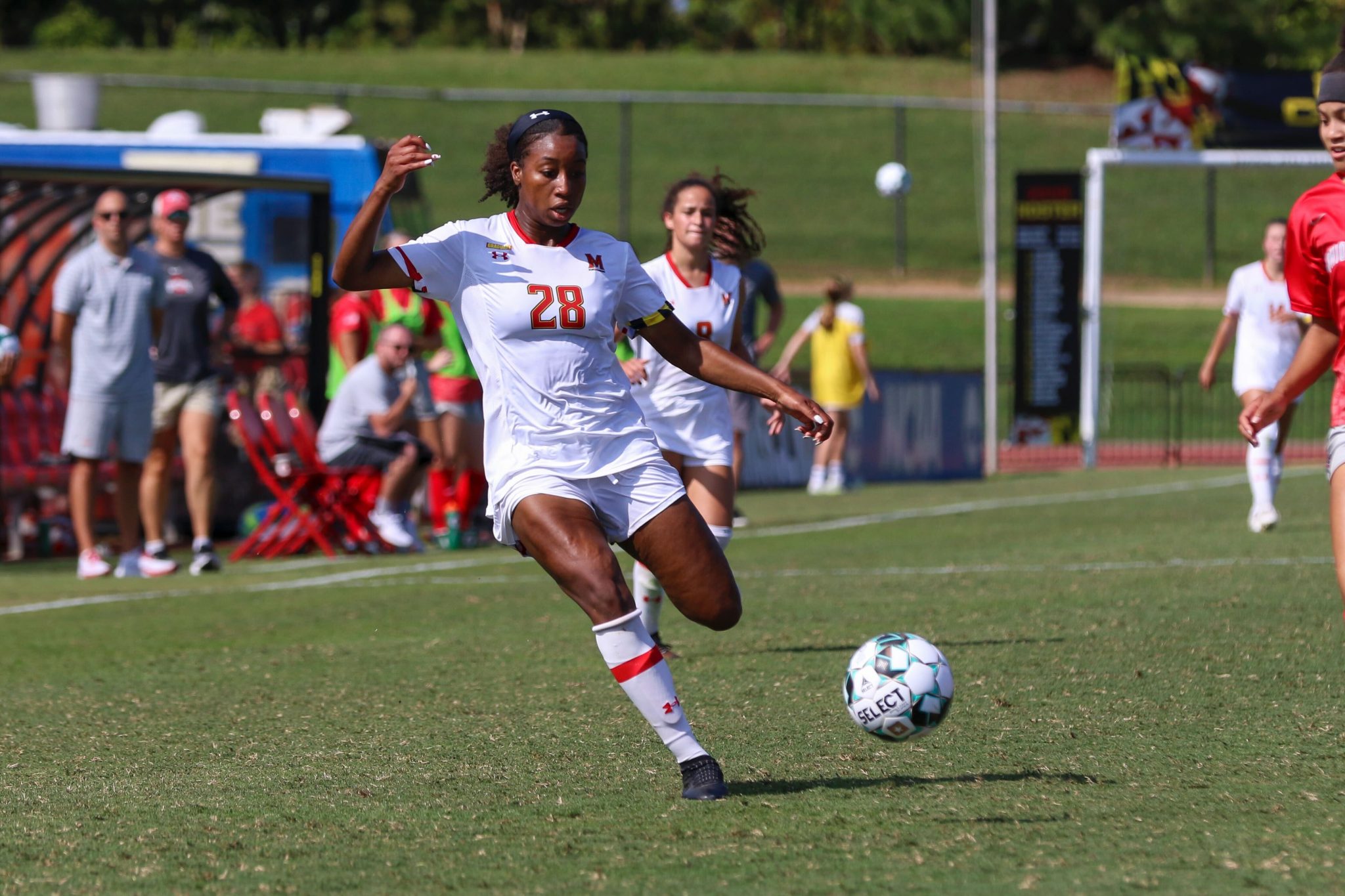 Just 67 seconds into Thursday’s bout with Navy, Maryland women’s soccer was already staring at a 1-0 deficit. The goal, a Jenna Daunt strike off a corner in the opening moments of the game, put the Terps in an early hole.

But coach Meghan Ryan Nemzer’s squad battled as the game progressed. After knotting the game at a goal apiece midway through the first half, Nemzer’s squad shut out Navy for the remainder of the game, fighting to a 1-1 draw at the Glenn Warner Soccer Facility.

Navy was coming off a 6-0 win against Marymount University, led by Carin Gabarra in her 30th season as Navy’s head coach. Thursday night’s matchup proved much more challenging offensively for Gabarra’s squad, as the Terps’ high-pressing, vigorous defense left the Navy attack with little time to build up play from their half.

It was a nightmarish start to the first half for the Terps. In just the first minute Maryland conceded from a corner taken by Navy almost directly on the six-yard box. Maryland goalkeeper Madeline Smith stayed on her line and the ball was met by the head of Katie Hermann, but then ricocheted off Jenna Daunt leaving Smith unable to respond.

“I thought besides that first minute they did their job on set pieces and corners. That’s the game of soccer, you turn off for one second, they capitalize and now you’re fighting,” Nemzer said.

It didn’t take long for the Terps to fight their way back into the game, just as they did in their season-opening draw against Temple. Fifteen minutes after falling behind, Kam Fisher found the back of the net from a grounded ball across the box delivered by Mikayla Dayes.

Maryland continued to find its groove as the half progressed, creating more chances to take the lead as the first half continued. Navy matched Maryland’s offensive energy as the clock winded, but both teams’ chances came from largely unthreatening positions.

“I think the biggest word we’re talking about is fight. We’re here and we’re ready to compete and I think that’s what I’m most happy with,” Nemzer said.

Maryland started the second half just as they ended the first, creating chances early into the half. Just three minutes in, Mikayla Dayes struck the crossbar with the first opportunity of the half.

As the final half went on, neither side could find many clear-cut opportunities. Both defenses reduced either offense to poor shot opportunities. With under ten minutes left, Navy was given another corner. This time, Maryland did not fail to defend it well — meeting the corner with a header towards the opposite corner flag and then winning the ball from the first Navy player to reach the ball.

Dayes nearly gave the Terps their first win in the Ryan-Nemzer era, sending a shot just above the crossbar with five minutes to play. As the shot went high and time expired moments later, Maryland walked off the field with its second straight draw to open its 2022 campaign.“I think they’re learning each other’s strengths and weaknesses. And tonight, what I take away is that we are deeper than what I anticipated. The game-changers came on and added a spark and sort of got baptized by fire,” Nemzer said.