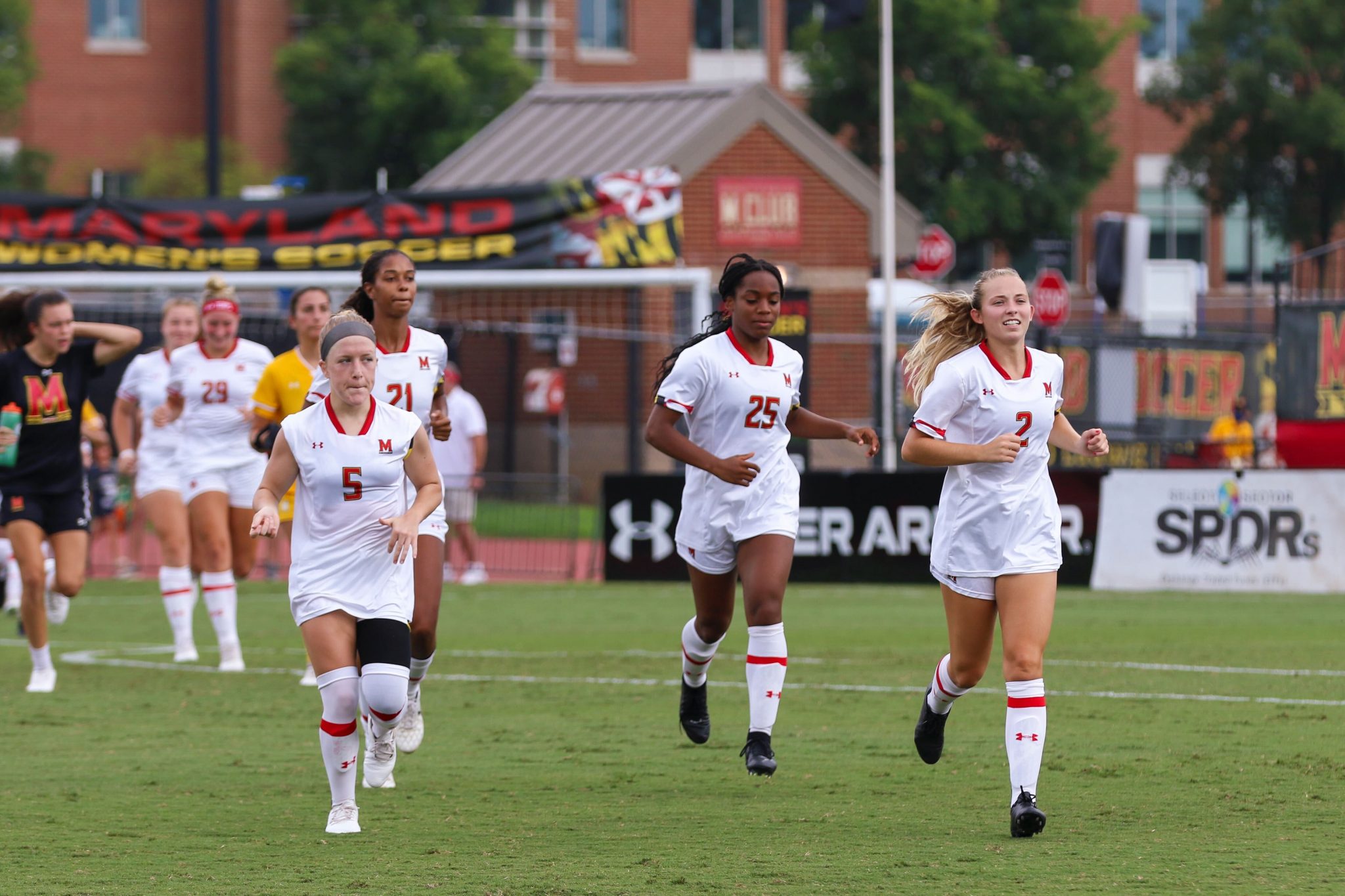 Maryland women's soccer runs out onto the field before its game against Navy on August 29, 2021. (Cam Andrews/The Diamondback)

Maryland women’s soccer faced a turbulent 2021 season. After starting last season with four wins in its first five games, the Terps didn’t win another game for the rest of the season —  culminating in the end of former coach Ray Leone’s time with the program.

The Terps will start their season against Temple for the second year in a row, this time under new leadership. Maryland’s matchup with the Owls on Thursday will kick off coach Meghan Ryan Nemzer’s first season at the helm for the Terps.

The change in employment doesn’t feel like anything new for Nemzer.

“I don’t feel any pressure because I feel like I’ve done this for a long time … I feel like it’s sort of the same job. Almost [the] same colors, but just a different letter,” Nemzer said.

Sweeping changes have characterized the offseason under Nemzer. There are 19 new Terps on the roster including ten transfers — highlighted by players like Alina Stahl from West Virginia and Sydney Urban from Florida.

“We do have some transfers that have been captains and have been a part of winning programs,” Nemzer said. “To add that experience and mentality will definitely help us.”

For transfers like Amanda Schafer, Maryland wasn’t initially an option.

“I had no expectation to come here whatsoever, but then I had one conversation with [Nemzer] and I was immediately inspired to be a part of this,” Schafer said.

Even with all the new changes surrounding the program, players say the locker room has gelled swiftly. The team had spent large parts of the offseason becoming a unit both on and off the field.

“I think it’s unexpected for a team to mesh so quickly. I was completely surprised at how well we actually did mesh, especially coming from different parts,” senior defender Olivia Hicks said.

“It’s exciting coming from a different program and having so many different girls … and we’re starting this new era under [Nemzer]. It’s exciting to see where we’ll go together,” Stahl said.

Katie Ely, Alex Ng, Kenie Wright and Joe Nemzer join the Terps’ coaching staff this season, a complete overhaul from Leone’s staff that struggled to produce wins in the Big Ten a season ago.

But Nemzer isn’t worried about the challenging opponents on the horizon for her revamped squad. Instead, she’s taken an inward-facing approach to her team’s preparation.

Hicks has been a part of the women’s program since her freshman year. She’s faced the lows of lengthy Maryland losing streaks. But at the dawn of her senior season, she expressed confidence in the direction of the team moving forward.

“Everybody’s all in. Everybody wants to win, everybody wants to come to practice every day and give 100 percent. I think that’s the spot we were lacking where we didn’t all have the same goals at times,” said Hicks. ”[Nemzer] definitely brought us all together to set that foundation.”