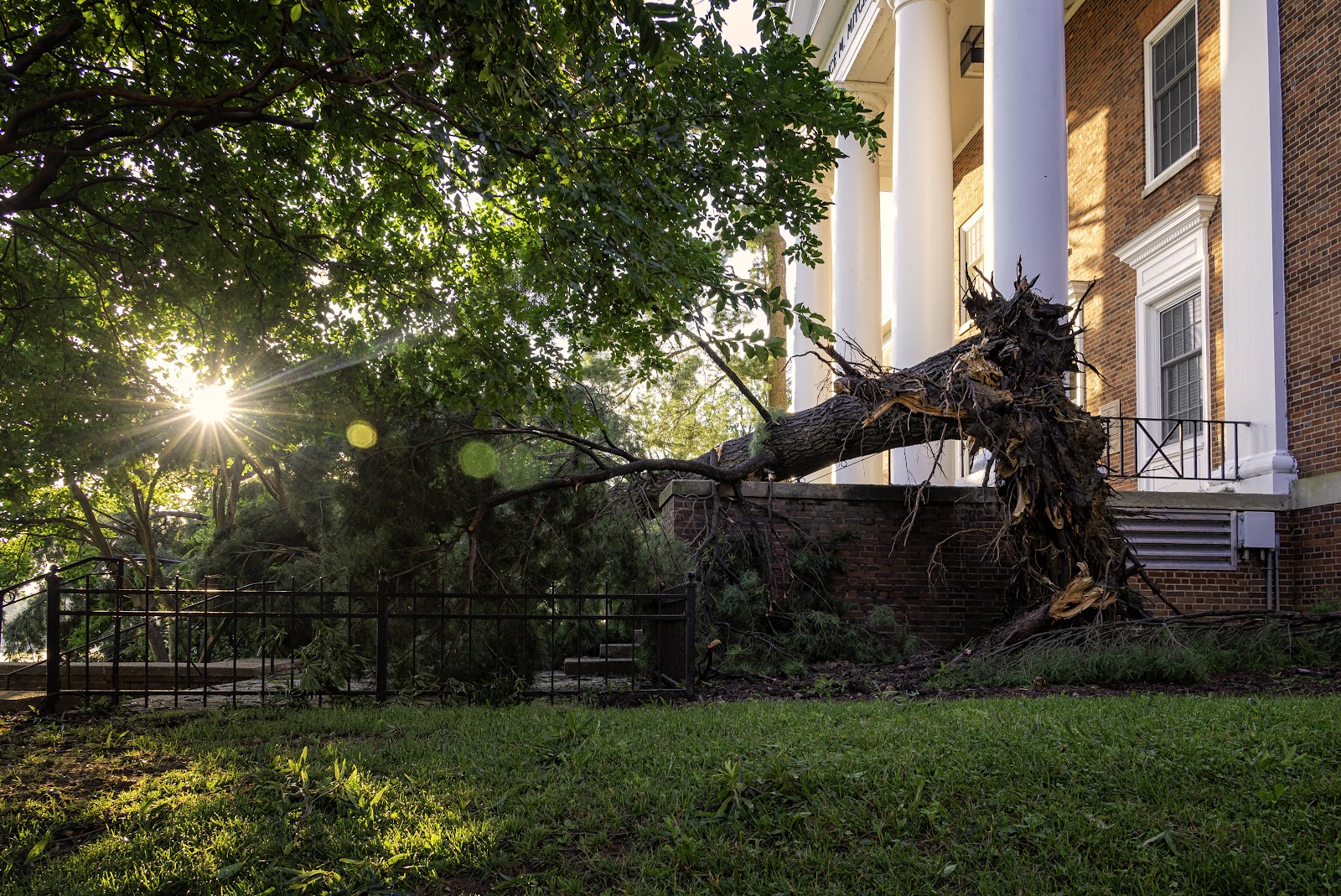 An entire tree falls over the stairs of the Clarence M. Mitchell, Jr. Building after the storm on July 12, 2022. (Photo courtesy of Adam Brockett)

By Olivia Nicholson and Ava Thompson

The lights began flickering at Looney’s while Adam Brockett was there for happy hour with a few colleagues Tuesday evening.

The power went out as the wind started blowing patio furniture around, Brockett said. Three or four people had to push open the door to let diners in from the patio because the wind held the door shut.

Water flooded the Looney’s patio and started to seep inside. Brockett said he waited 10 to 15 minutes for the rainstorm to pass before leaving.

“We had seen a bunch of sirens, and we saw that Route 1 was completely blocked off. There looked like there were a couple of trees down near the entrance to campus,” the University of Maryland assistant research professor said.

A severe thunderstorm in the Washington metropolitan area toppled trees, downed power lines, closed roads and damaged homes in College Park Tuesday evening.Winds sped up to 90 miles per hour and caused a wet microburst, which National Weather Service meteorologist Steve Zubrick defined as heavy winds and rain occurring simultaneously. According to the National Weather Service, the winds blew in a straight line, ruling out a tornado.

A tree severely damaged a house on Lakeland Road Tuesday night, seriously injuring one of the residents who is a student at this university, NBC Washington reported.

“We have a lot of trees, and some of those trees are not healthy,” Zubrick said. “Some of the trees, even though they look nice and green and everything, they do have some rot inside of them that you can’t see, so they’re more susceptible to breaking.”

Areas including Calvert Hills and Lakewood still did not have power Wednesday morning. To help those who have lost their air conditioning in the power outage, the City of College Park has designated several nearby libraries as cooling centers, available Wednesday and Thursday.

Fallen trees across the city closed down streets including Route 1 and Campus Drive, Brockett said. Brockett saw fire departments from Prince George’s County and Montgomery County tending to the trees on the roads and directing traffic Tuesday evening. A large tree had fallen in front of the doors of the Mitchell building, and caution tape was up on McKeldin Mall.

The university canceled all classes, in-person and remote, and administrative operations for the day, university President Darryll Pines tweeted. A university spokesperson did not immediately respond to multiple requests for comment regarding the cancellation or support that was provided to people staying on campus.

Zubrick said storms are common for the College Park area in the summer.

While there is no exact figure for how much damages, cleanup and utilities will cost, Adams estimated more than one million dollars.

“These next 48 hours are important to get power back and clean up and get these street lights working,” Adams said. “But I think we’re going to see a fairly quick recovery.”