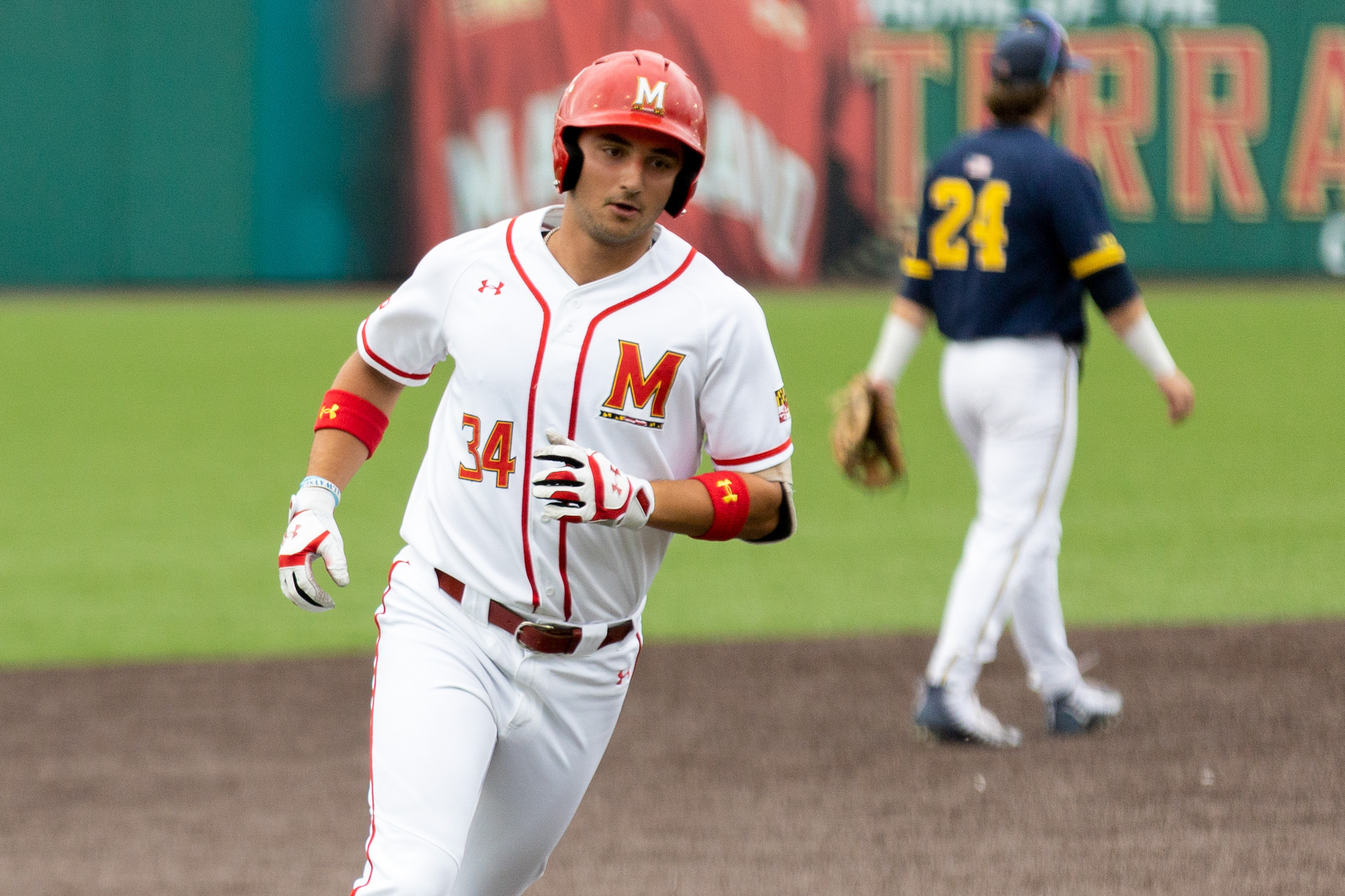 Nick Lorusso runs the bases during Maryland baseball’s 8-7 win over Michigan on May 13, 2022. (Riley Sims/The Diamondback)

With the sun setting in the background, the sold-out Bob “Turtle” Smith Stadium crowd erupted on a historic day for Maryland baseball.

Nick Lorusso caused the eruption, as he drove a pitch to left-center field for a bases-clearing double to give the Terps a six-run lead.

Maryland wasn’t done pleasing the crowd just yet. The next batter, Matt Shaw, drove a pitch out of the park and off the scoreboard in left for his 22nd home run of the season as he and Lorusso helped the Terps embark on a nine-run bottom of the second inning.

In its first time hosting an NCAA regional, No. 15 seed Maryland thrashed Long Island University, 23-2. The Terps will now face Connecticut on Saturday for the chance to advance to the regional final.

“What a special night,” coach Rob Vaughn said. “I thought our guys did a good job of controlling their emotions … Just a good complete performance, exciting night for us and a good first step.”

Troy Schreffler started off the frame with a single and a stolen base. He kicked off the scoring when Bobby Zmarzlak’s perfect bunt forced a throwing error to first base and let him scamper home.

With runners on second and third, another Sharks error gave the Terps their second run and a Luke Shliger sac-fly made it 3-0 before Lorusso and Shaw split the game open against Long Island starter and second-team All-American Josh Loeschorn.

“Loeschorn, he’s good [and] his stuff’s good,” Vaughn said. “We just got fortunate, we executed with the short game early and kind of kicked it around and that opened up some big things for us right there.”

The offense stayed hot in the third behind a pair of doubles by Lorusso and Schreffler that scored three runs.

The onslaught continued in the fourth inning, as Shliger’s two-run home run over the center field wall helped Maryland score seven runs and bat around their lineup for the second time. After four innings the Terps led 19-0.

“It was just a really complete effort offensively,” Vaughn said.

That run support was plenty for ace Ryan Ramsey to cruise around the Sharks’ lineup.

He began his outing by striking out Seth Surrett and worked around a one-out single, retiring EJ Exposito by flyout and Giovanni Ciaccio by strikeout to end the top of the first.

Ramsey allowed a leadoff single in the second but erased the runner with a double play before ending the inning with a strikeout.

Three more clean innings by Ramsey finished off a five-inning shutout performance. He ended with 11 strikeouts while only allowing four hits and two walks.

Maryland added four more runs and finished the game with 20 hits as every member of its starting lineup earned a hit.

With a near-insurmountable lead, Logan Ott relieved Ramsey and pitched four innings to finish the game and earned the save.

The Terps faced an early test against a Long Island team that won the Northeastern Conference tournament. Maryland came off a disappointing early exit in the Big Ten tournament and faced the pressure of hosting the school’s first-ever regional.

However, Vaughn’s squad was unfazed and delivered in front of the sellout home crowd — ensuring that the next time the College Park faithful saw them would be in the region semifinal.

“I thought it was fantastic… how loud and how energetic everybody was,”  Lorusso said. “But you know, we’re gonna have the same thing tomorrow and we can’t let our emotions get the best of us but…it’s something I’ll remember forever.”